Published: 8.10.2010
We definitively leave picturesque countryside of Slovak Paradise, and after visit of Dobšiná Ice Cave, we transfer towards Low Tatra Mountains, where our active holiday will continue. But, between Low Tatra and our starting position, you can find a region, the beauty of which could not be omitted in any case, and if you are not in a hurry, you can make a small branchline.

So, from Dobšinská Cave, a relative direct way leads to the town of Brezno, the centre of all

activities. Nevertheless, we diverge from the track shortly behind Telgart, in a community of Červená Skala, to the south, where the information sign leads us to Muráň Castle. Just its name gives evidence that we enter into the region of beautiful and  mysterious Muráň Tableland. We drive on road No. 531, winding along hill-side of green mountains, and we drop subsequently down in valley, towards small town of Muráň - into the valley of pasture-lands, horses and cows. The best way how to be acquainted with local countryside, it is the way itself, and a bit of tourist walks. From all recommended routes, the best way could be probably two hours walk between Great Meadow and Muráň Castle. Educational path has middle stage difficulty and leads directly from parking place. During two kilometres´ walk, you will get enough detailed information. You can reach the path also from the village of Marianska Huť, but this way is of three kilometzres longer. The ruin of Muráň Castle is situated on rocky headland, known as „Ciganka“. 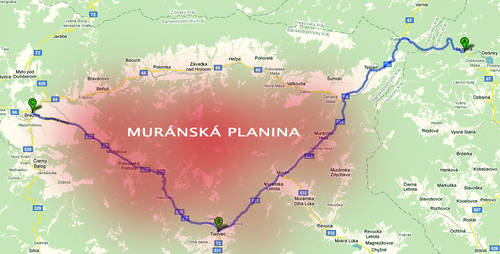 From Robbers to Rodeo

metres above sea level). The construction served originally as  defensive stronghold of merchant way between Zvolen, Liptov and Hungary. However, the original character of this bulding was not preserved till now. The castle survived, except great fire, also several reconstructions. To most known personalities, connected with the castle, belonged Matthew Bašo, rapacious knight. Within 1529-1549, he, together with his escort, plundered and pillaged all regions, within reach of this dominion. He destroyed the towns of Levoča and Dobšiná. His name was joined with destruction of Carthusian Monastery in Kláštorisko. After such sad history, the castle changed many owners, their intensions were rather more peaceful. However,

within 18th century, the building was burnt out twice, and since that time period, (with exception of regular maintenance), the building was not inhabitated any more. As a testimony of old as well as recent times, the powerful entrance gate, rests of fortification and vast courtyard, were kept in good order till now. However, all these spaces are subsquently covered with woods and bushes, and all these plants cover the ruins of from past  important castle. Nevertheless, in 2005, an expressive reconstruction was effected there. Wooden platforms, serving as impressive views into surrounding countryside, were built there.

A Walk in Forgotten Country

Local country, and especially Muranska Plateau National Park, is full of romantic corners, leafy woods, strange rocks as well as foggy valleys, where men´ influence was signed in minimal way, and if so, in harmony with nature only. Local horse and cow husbandry belong to most traditional ways of  subsistence of local population. Even rodeo show was organized in Muráň within past couple of years.

A nucleus of the youngest Slovak National Park is consisted of limestone and dolomite table land with karst formations. On the surface of more than 200 square kilometres, there are to be found at least 250 mostly inaccessible caves, tens of precipices, springs and hills, dominated with Fabova hola (1439 metres). In general, you can find there at least 300 kms of marked tourist trails, and they are worth, for sure, to be walked through your next excursions. Nevertheless, our drive continues, and we follow the road No. 531 towards small  town of Tisovec, and from there, back to the town of Brezno. From this place, it is not too far to our mountaneous excursion. The description follows in our next chapter…

From Chopok Up To Ďumbier

Published: 22.10.2010
Small diversion from Muráň plainland did not disturbed at all the plans of our active holiday, which continues in Low Tatra Mountains. The distance from Brezno to a top of the massif, dominating with Ďumbier Peak, is not great.

Published: 1.10.2010
Everything has its end, so, the same situation was with our stay in a Paradise. This could be rather particular sentence in our relation about holiday activities. Nevertheless, now, we change ahead, in order to experience another adventures, to Dobšinská Ice Cave, drive throughout mysterious Muránska Table Land, and arrive finally to Low Tatra Mountains.

Published: 17.9.2010
Active Holiday II. As mentioned in our first chapter of our journey, camping place Podlesok could be an ideal starting point for visits of most impressive valleys, such as Suchá Belá or Piecky, or 6 kms distant Velký Sokol Valley.