After all, I drove through the countryside, which one American writer (Colin Woodard) called El Norte . It is essentially a cultural region, where Spanish-Native American settlement which was later flooded by white Americans and joined to the United States .

I mention this because it is in this area, or a little further south in Texas, created concepts that are familiar from westerns. The words are like lasso , mustang or ranch .

I approached the canyon from the South, and while driving along historic Route 66 . She also dubbed the Main Street of America, because they belonged to the spine of the first highway system in the USA, which began to be constructed in the 1920s

. The highway began in Chicago and ended in Santa Monica in California, so the total length of almost 4,000 km. Over the years, however, has undergone a number of changes in 1985 this route ceased to be part of the U.S. highway system.

On Route 66 there is also a small town of Williams with 3000 people. From there, the road goes northwards Grand Canyon Village . The latter city is already within the borders of the Natural Park Grand Canyon and substantially all focused on tourism.

I went through a gateway located in a dense forest and immediately behind the entrance I was lucky because I saw several does. Evening was slowly approaching evening I wanted as soon as possible to find a prospect, I enjoyed the view of this monumental natural formation at sunset.

Unfortunately, I had very little time to see Grand Canyon. I saw a mere fragment of it. The canyon itself is 446 km long. It has been created by the Colorado River in the last few tens of millions of years. 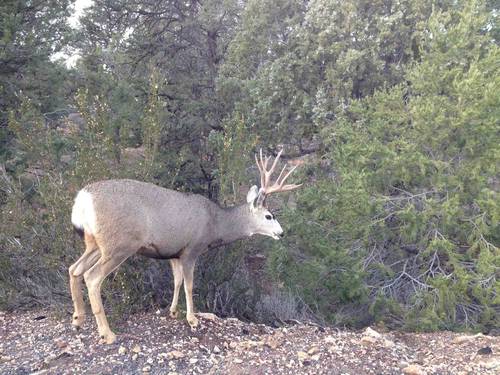 I got on a scenic route that opened to me a look that is just unforgettable. Where my eye could see there was just the canyon. From the time, first people saw it still makes people awe.

The silence that echoed around me only occasionally interfere with some speaking tourists, but I stayed there for several hours and watch the blue sky gradually changing to orange, then to red and finally the blackness fell.

I couldn’t resist it so I went to the gift shop to look at what might be worth to take it home. In addition to traditional postcards, posters and documentary movies I saw mock Native American tomahawks, headbands, cowboy hats, bows and arrows, and Native American talismans in the shape of different animals.

I regretted that I had less than a day to see the Grand Canyon. In addition to hiking in the canyon one may go rafting on the Colorado River or ride mules.