So, the town of Nowosibirsk would be a target of our journey. This third biggest town of Russian Federation was founded in 1893, as one from main stops along Sibirian Railway Line. The distance from Moscow makes nearly three thousands of kilometers, and monotonous drive by train takes there, according to official time-table, nearly fifty hours. The same scenery is repeating behind train-windows: birch-trees, pine or birches, some semi-demolished cottages, including pasturing horse, and forest, forest, forest. The more distance from Moscow, the more the journey is monotonous. Nevertheless, this is not valid for the atmosphere in overcrowded waggons, where you can make acquaintance with genuine Russian Wodka, universal medicine and non-freezing liquid mixture at the same time.

So, we reach our target after two days of trip. The train passes countless number of small and insignificant stops, from the beginning of Volga-area. To tell the truth, local towns are rather monotonous. The dwelling panel houses, factory chimneys, grey and misery, somewhere skyscrapers and hundreds of dilapidated houses along the route and names of stops, giving no concrete information to you. 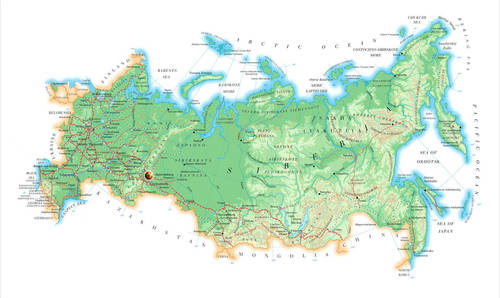 Nevertheless, we wish to mention the name of Ekaterinburg, which will be our first stop during our Siberian journey. After one-day trip from Moscow, this is the first important metropolis of Russian Federation. Ekaterinburg is main seat town of Ural Federal Circuit and the fourth biggest town of Russia. The city was founded by Tzar Peter the Great in 1723, dedicating the name after Catherine I. his wife. In fact, the name of Tzarina was given by the founders of local iron-works, established there on grounds of originally old community. However, the town became ingloriously known as a place of murder of Nicholas II., Family, the last Tzar of Russia. On the other hand, to boasting places of the to

wn at Ural Mountains feet, belong eight Universities as well as several monuments, important from historical point of view. It is, first of all, Krvi Orthodox Church, the best attraction of the town. The church was constructed within 2000-2004 on a place, where, on 17th July 1918, Tzar Family was murdered inside cellars 70 years ago, shot into pieces, stabbed and watered with acid. Within time period 1924 -1991, the name of the town was changed to Swerdlowsk - in honour of Bolshewik leader, who murdered all their local adversaries.

owever, during Stalin era, most of churches was liquidated mercilessly, and gigantic factory complexes were constructed on such places. So, Ekaterinburg became a symbol of suppressing of exploiting forces of hateful aristocracy, and so called workers´ Moloch - Uralmash - gigantic machinery factory, was constructed there, the biggest machinery factory of Europe, at that time.

Ekaterinburg is a border town between Europe and Asia, whereas a half of town is situated in European, and the second one on Asian part. The town is also named as a „Gate to Asia“, similarly as St. Peterbourg is known as a „Window to Europe“.

Anyway, today´s look of city centre is, first of all, completely cultural and intelectual, referred to local Universities, mentined above, and a presence of libraries, scientific - investigating institutions, thetre scenes and renewed Christian monuments. Since 1991, the town has one metro (unterground) line available, which is enlarged up to final number of thirty stations. Regarding international traffic, it is Koltsowo Airport, where also Cze

ch Airlines are landing. Local railway station forms an important junction of Trans-Sibirian Line, together with biggest railway yard in Russia. However, outskirts of the town is poor, and full of panelling houses, according to Russian style. Despite all efforts, we are still in Russia, and the area does not belong to tourist attractions at all. Except the church, mentioned above, there are not many places of interest available, so, we move ahead the Trans-Sibirian Line… so, good-bye in Tatatstan, in Kazan, for the next time!