en.infoglobe.cz » Do You Know That? Finland - Ice Adventure 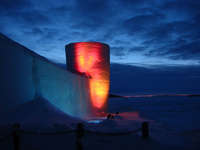 Last visit of north brought us to the Russian port of Murmansk, which is unique in frostless year-round access. Today's part will be about ice and ships, for which is no problem to fight against it on their cruise voyages. Home base will be the Finnish port of Kemi, situated south of the Arctic Circle in Lapland Province Lapland. Industrial Kemi does not plentiful impressive beauty, monuments, exhibitions, we are looking for is difficult. The city, however, the property boasts the largest chromium mine in Europe and other mining and manufacturing complexes. For tourists there are prepared only two, but remarkable attraction. The first is the largest snow castle a world that is built differently each season. The area of ​​notable buildings ranges from 13 000 to 20 000 m², which is a stretch, as they would have done no medieval residence. The ice chamber, statues, tables and equipment, and especially snow ecumenical chapel serves as a marriage room couples in this remarkable building goes often from distant Asia. Works are also ice hotel whose interiors are decorated with decorations from the hands of local artists, according to traditional Lapland crafts. More on: http://www.snowcastle.net/en/.

For lovers of Nordic metal music perhaps even the mention of the group Sonata Arctica, whose home is just Kemi city...

The main attraction of the town, which annually attracts thousands of visitors, is the ship Sampo of 1961 - probably the only tourist icebreaker in the world. Today's icebreaker Sampo bears the same name as his famous ancestor who served in the local waters in the late 19th century. Icebreakers for Nordic harbours one of the most needy workers and their entire history, then become an indispensable part of sea transport. Massive trunk and overwhelming engine power can break the way to other ships through ice cap by almost one meter thickness and this way make a clearance corridor for common types of merchant ships.

They work as well as a safety, service and shipping vessels in all the Arctic coasts. After more than twenty years of hard service, he won the opportunity to accompany the icebreaker Sampo Ice-plains of the Gulf of Bothnia and groups of tourists, of which over time became one of the most popular northern attractions, which annually graduate about 12 000 visitors. More on http://www.sampotours.com.

Four-hour cruise cross icy wasteland on a ship with a length of 75 meters, a width of 17 meters powered by four units of output of 6000 kW, according to recollections of travelers truly unique experience that will be enhanced by swimming between floes of ice water, which will be lent to the hard ones special neoprene overalls. The part of the cruise is a lunch, on which the selection of typical regional dishes as reindeer meat and salmon cream soup with tasty Finnish bread. Most of one day trips to Kemi city also

include cruise and safari with ice on snowmobile ride and a visit to the above-mentioned ice fortress.

The price of cruise is set at 250 euro, the ship leaves 3 - 4 times a week from late December to middle of April. Snow castle then offers accommodation from € 280 per double room or € 320 for the honeymoon suite. Open from February to mid April and then a visit is recommended just the beginning of February, due to the good visibility of the aurora. To Kemi city flies scheduled service from Helsinki.

Published: 19.1.2017
If you visit Rovaniemi in Lapland (a town known for the Santa village) and try a ride on dog or moose pulled carriage among other snow-related activities, there are many other things to see and do.