en.infoglobe.cz » Do You Know That? Hashima – Japanese Ghost Island

The story beings few kilometers away in a close district of Takashima where locals use a strange black mineral, goheit, for heating. It quickly became one of the most demanded materials in the whole island empire. It goes without any further doubts that the mineral was high-quality coal. Since the 18th century Takahashima transformed from an inconspicuous island to one of the richest coal reservoirs ever. Since the second half of the 19th century Japan was opening itself to the outer world. Its industry and international trade flourished and its almost unlimited coal reserves were one of the most valuable commodities of society and steam powered industry of Europe and the rest of the world. Nagasaki, an industrial center and important harbor, was together with the rest of the empire a great consumer of coal. Its consumption was so extensive that an old transport system of workers to Takahashima became insufficient. According to an agreement on mining endorsement, a modern British mining machine was transported to Japan. Together with a team of mining engineers it should cover ever raising demand of growing empire.

In spring 1869 Takahisma saw its first modern coalmine that was also first in whole Japan. After the opening a new industrial period of Japanese history started. As we know, appetite comes with eating and the same applies to this black mineral. The righ to mine at some particular land depended on an agreement of heads of the most important family clans that owned particular localities. Quarrels for land ownership and huge profits concluded in exhausting and futile efforts to find another deposits on other islands. A small and unpopulated Hashima island was one of them. First it was a small rocky promontory with area covering less than 1.2 km2 .

In 1890s a mining colony was established fifteen kilometers away from Nagasaki and soon it became a property of the Mitsubishi company. A massive scale of mining and complexity of constant transfer of miners back to their family resulted in the only solution possible – the island had to be adjusted so that it can be a regular home for many generations and a city with services for hundreds and later thousands inhabitants, as well. At the beginning of the 20th century there was a baby boom on Hashima. An empty rock barely fifty years ago on which endlessly crushed sea waves, at the turn of the century the island became a flourishing city town. There was an elementary school, a high school, hospital, cinema, 25 shops, few restaurants, chapels and other things a civilized man/women need for life. 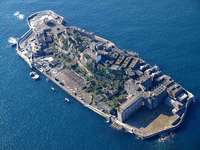 A first ever panel house in Japan dominates a massive housing development. Back then it was considered almost a skyscraper, inhabited by dozens of families on its 9 floors. Despite the area of the island was artificially increased it hadn’t exceed 6 and half hectare. On a modest area were crowded, except already mentioned buildings, unbelievable 5 000 inhabitants! The first significant crisis began during the Second World War, as an important participant in the conflict Japan needed except for vast amount of coal also every man for its navy. Young and old Japanese felt a moral obligation to fight for their country, but they were needed in coalmines. Every able bodied men older than 14 years of age, even POWs, “enslaved” Chinese, Koreans. Harsh working conditions more than 200 meters under the ground, endless fear of air raids, common living of dozens of people in cells originally intended for modest families of miners – this was an everyday life on Hashima. During the war were registered around 1300 deaths due to an absence of any safety measures or systems

Sufficient supplies of fuel were needed to postwar restoration of devastated Japan. Guarantee of food, accommodation and a basic living standard brought more than 3000 and later almost 5.5 thousand settlers who made a home here since 1959. Regarding the area of the island it is today one of the most populous places in the world!

On August 9, 1945 Nagasakipaid the highest price – it was a place where the atom bomb exploded. Originally it was intended for the industrial center of Kokura, however, on that day it was covered by a thick lyer of clouds. Soil contamination and total devastation and resolution of the nation only strengthened an interest in life and work in mines of Hashima as well as on 480 other islands along the coast of Japan.

Same massive postwar growth and decrease of population happened at the end of 1960s. Cheap Arab oil literary changed every industry. Ships commonly used oil products and coal’s influence waned. A definite end came in the year 1974, when all mine works were

ceased. The population of the island was transported to mainland. Most of the transported took with them only their memories, old photographs and some indispensable things for a new beginning. After the last miner left Hashima, the island became literary forbidden area. Nobody could land there, for safety reasons, let alone walk through things that were left here. Buildings were falling apart, underground was unstable and there was almost no way to connect with mainland. A punishment for breaking the ban of disembark was 30 day imprison plus, in case of some foreigner, expulsion from the country. In that time the island became almost a legend. A mythical place where fishermen would take you for some little bribe. At dusk, when you can see only barely visible silhouettes Hashima reminds one of a huge battleship. You can often see this as a nickname for the island the "Battleship island" or Gunkanjima in Japanese 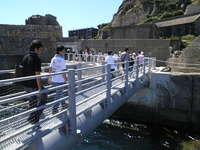 Because of the endless pressure from the general public, tourism and media first visitors after dozens of years were allowed to get on the island, in 2008, and shoot some videos and take photos, legally. Despite all permissions nobody will ever look into the underground of the island where are hundreds of meters of shafts that for almost a hundred years fed with its 16 million tons of coal voracious steam machines and the economy of the Empire of Japan. Plans for opening the island to the public are still alive. Meanwhile the island became an official part of the national cultural heritage, however, the public must still wait. Needles to say, the island inspired many filmmakers.

Today a part of the island is accessible. There is enormous interest in visiting the island.

Attached photos will, hopefully, help you to have some image of the island, photos from the history of the island are for example here zde.

Do You Know That? Italian Ghost Town

Published: 15.5.2011
Today's chapter will not be dedicated to the description of records but will be specialized for knowledge of one from most impressive and rather forgotten corners of Europe. So, let's visit South Italia, where deserted rocky small town of Craco is to be found.

Do You Know That? The Smallest State Of The World

Published: 31.7.2011
Vatican, Monaco, or Nairo? To tell the truth, the smallest state and nation is really the Sea Mini-Principality not far from Great Britain!