en.infoglobe.cz » Do You Know That? Norway - Svalbard II.

Do you know that archipelago of Svalbard is the northernmost permanently inhabited place in the world ever? That, what attracted adventurers for centuries was primarily fishing and polar expeditions, and later, after the discovery of mineral wealth, created here a colony of miners, craftsmen and scientists from virtually all corners of the planet. This interest has declined over time, but still enjoys a relatively wide islands of interest among tourists longing to experience something a little north of hardship, even if the conditions of today's comfort or accommodation vessel in comparison with the past is really only a smile.

Of course, you can´t assume that to Svalbard is coming as many travelers as the Canary Islands. Since the end of April until the end of August is the highest interest, the reason is the Arctic summer, when the sun never sets for 24 hours ... half a year. Now is the time when flocks are brought to life the polar birds, polar bears, walruses, reindeer and foxes and tourists. Even the flora is not far behind, but the trees we are looking for in vain. The top of the flora season are tiny flowers, the size of our or lily of the valley. A unique feature is the low forest of the world, consisting of dwarf birch grove forest. 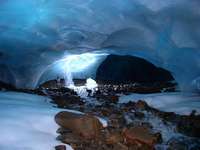 r is also the spring and autumn, while the half-year stage culminates in July, when average daily temperatures attacking at 10 ° C! The coldest month of the year is March with -15 ° C in daily average.

The islands are covered with 60 percent of glaciers, are interspersed with rocky or endless snowy fields and mountains, sharp peaks to reach the eye. The highest point is Newtontoppen (1717 m) in the northwest of the largest island of Spitsbergen, which got its name after the physicist Isaac Newton.

National parks occupy a very substantial part of the island and some of them are even protected so that the human foot is not close to them at less than half of kilometres distance. Restrictions on movement and strict rules are certainly justified step, just as there may be the original natural system of perfectly preserved, isolated and called up while under the supervision of experts - naturalists. Safety precautions are essential in places where there is rampant contact with polar bears on the islands actually doing. In the case of such deadly encounters are virtually all visitors, and especially the expedition, trained in handling a rifle. Active and intentional interference hunting game is strictly prohibited. In addition, bears are usually meet and polar foxes and local reindeer, from the smaller mammals there are mainly the voles.

Currently the resident population of islanders includes around 2800 people, two-thirds of Norwegians are represented here the rest is made by Russians and other nationalities. The economic potential is the number one is fishing and coal mining however the only exporter is the Norwegian state coal company.

does not stop there: In Longyearbyen is the northernmost bank, hospital, kindergarten, library, night club, pub, school, supermarket and travel agency. The city's history dates back to 1906 when he founded the American John M. Longyear, who came here as other than coal.

Near the town is located to store of seeds, known as a Svalbard global repository of seeds. This facility was established to maintain a wide variety of plant seeds from locations worldwide. Equipment should be safe havens of seeds for major regional or global crises. Giant Ice halls of the former mine hiding hundreds of black boxes, frozen at -10 to -20 degrees, so that conserved supposedly last for hundreds of years. Total capacity is 2, 5 billion on seeds ... now it is placed approximately 750 000 seeds from 4200 plants.

The town Longyearbyen is, except the integrated transport system, a full-fledged centre of all social life of the islanders and tourists. Sports, cultural facilities, three hotels, a variety of shops, museums, cinemas and nightclubs are all available. Imagine that you go to 26th October evening in the bar and return to morning, 15th February ... that's could be a good party you think. The rest of the year, during the polar day, then you can sleep late hangover. A very real possibility to visit the islands is to sign up to study at a local university. Svalbard's University is since its founding in 1993 in favour of students from around the world. Frome the Czech universities there is University of South cooperating, especially in science and geography degree programs.

In the capital is in service the small international airport that is not international in the truest sense, as the main link was just to fly the Norwegian cities of Tromsø and Oslo. Anchored here and Russian ferries and icebreakers for expeditions to the Arctic – but we will talk more in the next episode. The main activities for tourists is a visit to the surrounding mountains, glaciers and cliffs with bird reserves, fishing is possible after obtaining a permit. The desired attraction is a ride with a dog team or on the sea kayaking the waters Advent fjord. The surrounding countryside is a paradise for geologists, the place will come here and fossil collectors, if they join to the allowed expedition.