en.infoglobe.cz » Do You Know that? Norway: The Beauty Of The North I.

The first episode journey to the northernmost point of Europe will take us through narrow streets of the fishing town of Bergen.

During our journey we will visit several interesting sites, which are located mainly in the territory of Norway. The southern edge of this kingdom, we have already mentioned our site several times and even in separate articles devoted to such capital - Oslo.

Cities and places such as Bergen and Lillehammer Lofoten had so far been neglected, and therefore I am going to fix it in subsequent articles.

Just the first stop will be fishing town of Bergen, known primarily for its colourful port houses. To Bergen is probably the most convenient and fastest journey by plane, which comes with low cost airlines around 4 thousand CZK, which is about the smallest item, which you can meet the Norwegian tour, since everything else it will be quite expensive. The second, equally comfortable and also perfect adventure travel is by train, which arrives here from Oslo after about

seven hours drive cross nature, which incredible beauty won´t leave take your eyes from the windows of a modern train which passes through rugged mountainous landscape to the north-western Atlantic coast. Journey by train daily journey is around 400 NOK, which is CZK 1200, but prices may vary according to the current course and student discounts as possible (more on the website of the Norwegian railway https://www.nsb.no/)

The town of Bergen lies on the same name peninsula in an area called Midthordaland or a region of Bergen om omland. Location of the city is very interesting, because it is separated from the rest of mainland high wall of mountains, while the other side of its shores are bathed by waters that are in these places dotted with dozens of large and small islands with ports such as Askøy, Flesland, Agotnes, and many many Klokkarvik other.

Bergen is also the capital of the region Vestlandet - the western countries or regions. The city, with its nearly 400 thousand inhabitants (including outlying areas), is the second largest in Norway.

The city was founded around 1070 by King Olaf III., Son of the famous founder of Capital City Oslo King Harald III. Bergen was until the early 17th century the largest city in northern Europe and its original name - Bjørgvin - literally meant "green meadow between the mountains." At the beginning of the 13th century assumed the title of capital of northern Norway from Trondheim elevated. This status had only between years 1217-1299, when it finally became a major residential centre in Oslo. Bergen, however, still maintained a very cordial trade and political relations with the rest of the Nordic countries, especially Germany and Denmark and the Hansa major cities - Union business related cities I otherwise quiet and clean city suffered at the end of 14th century plague, the plague is here probably got one of the many British merchant ships. In 1429 the city was even burned and plundered by German commercial and strategic aggression that ended in the middle of 16th century. 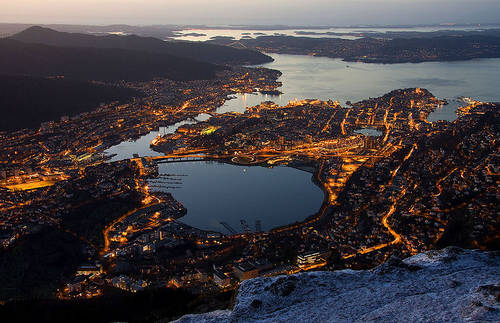 Another disaster here again and it brought the Germans during the war of 1944, when the moored warship exploded along with a cargo of ammunition and explosives, that leveled most of the port houses.

arm sea flow, which also brings significant precipitation in Bergen and a relatively favourable climate, with its average annual temperature of 8 °C, the second highest in the entire Norway. Conversely 213 rainy days a year is one of the highest measured values ​​in Europe. In the winter of 2006, here it rained almost continuously 84 days, a new city record. Rainiest place is Norway Brekke city with more than 3500 mm of precipitation.

The most interesting part of the city, located north of the Gulf Vågen. There is Bryggen, the old wooden houses from the early 18th Century, but the underlying feeling of the ancient Middle Ages. Colourful houses lining near the harbour promenade hides many a mysterious corners. Wooden buildings are also in constant moisture all kinds of twist, bend, so the resulting impression gives a sense of who knows more architectural expression. Furthermore, there are two churches, whose origins date back to the 12th century. Royal residence and Haakonshallen Rosenkrantzská tower definitely worth the visit. Overall, then stroll throug

h the city just rich one day. What visitors should not miss is the ground track to ride mountain Fløyen, where from a height of 320 meters above sea level view of the city is surrounded by seven mountains, which became a symbol of Bergen.

Bergen is also a city of education, where there is a famous university with a capacity of 15 thousand students who are educated here in the main fields of medicine, technology and the law and psychology. Generally the studies here are one of the most popular aims for young people from around the world.

For us it is not just another stop before wandering over rugged and mythic north ...