en.infoglobe.cz » Do You Know That? Norway - The Beauty Of The North IV. 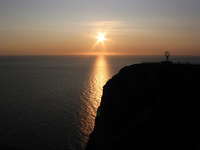 This question is not a big problem for tourists and travelers, because what could be more symbolic of the "end times" over rocks and cliffs falling into cold water the Barents Sea, beyond which lies just the Arctic region. North turntable, a Pole, is distanced from the Norwegian coast, on average, about 2200 km. All of the sanctity of this place have one, not very significant problem.  Cape North Cape is located on the island. It is indeed connected to the mainland through an underground tunnel, which overcomes the tiny Strait, but it's quite shaken by the fact that the northernmost point of the continent is just Nordkapp. Nitpicker, respectively each refractory cartographer, however, will insist that the northernmost point of Europe is about 20 km east cape located Kinnarodden on a peninsula Nordkinn.

But we keep to tradition and Magerøya island on which is located just admired and photographed Globe - a symbol of North Cape. Road connecting the mainland with the island and adjacent towns were built up in 1956. At the end of the museum charts the famous expedition to the northernmost corner of the world appeared before more than 500 years ago.

When in 1553 acquired this piece of land and an impressive 300-meter cliff its official name, that when the British explorer Richard Chancellor is looking for his ship Bonaventura northern trade route to China. Knyskane monumental cliff around which sailed through the storm, since bears the name North Cape - the Nordkapp. Since then the island was an aim of many expeditions, literally from a

round the world. In addition to European sovereigns, noblemen and Scandinavian adventurers here in 1907 and visited the King of Thailand. Since the early 20th century voices grew louder after the conclusion of the Cape for the general public and especially in order to preserve the original landscape and natural values. During the Second World War took place near the North Cape one of the famous naval battles between British imperial fleet and Kriegsmarine, the Battle of North Cape. In 1956 it was already mentioned the first asphalt road. In 1984 the building was made of the monument Northkalott and began work The Royal North Cape Club. Shortly thereafter, was also an extensive underground space containing the cinema, church, exposure Thai King, the exposure history of the Cape and outdoor observation deck. At present, however, the entire complex even more extensive and includes: car park, main entrance, a memorial stone Oscar II, Children of the Earth exhibition, information kiosk, restrooms, public telephone, lifts, cinema, connecting tunnel underground Grotten Bar, The Royal North Cape Club, the Chapel, Thai museum, cafe Kompasset, Kompasset restaurant, coffee bar, souvenir shop, post office counter, a panoramic hall, North East, steel Globe and monument. (viz.Wikipedia.cz)

Northkalott Monument - on the way the midnight sun (Midnattsolveien) was built with the contribution of all directors of the Nordic region, which participated in Norway, Sweden and Finland. Overall, the memorial consists of 12 different kinds of stone from different areas. In 1989, there was a complete children's sculpture project, which included a little above themselves artists from all continents - is a symbol of cooperation, friendship, hope and happiness ... 7 continents - 7 sculptures, which overlooks the sculpture mother and child. Perhaps the most famous photographs and graphic motif is a steel globe, respectively its skeleton. The Royal North Cape Club is the club of those who visited the North Cape and thus have de facto member only advantage that the lifetime free entry to the premises or paid. Well do you not take it?