en.infoglobe.cz » Do You Know That? Russia - Murmansk Harbour

When severe winter covers the entire country under its icy coat, few

lakes or rivers remain navigable. Layers of ice, consisting of tens of centimetres are creating icy highways and imprison ships in ports. Business travel in most of the "big country" so much of the year will remain dead. North Russia does have several major port cities, but few remain throughout the year without ice sheets and frozen bays. One of the few is just the port of Murmansk, located about 200 km from the Finnish, respectively the Norwegian border. More in details examination of the maps we find an interesting fact that Finland does not have access to the northern Barents Sea, so most trade routes leading through the ports of Norway or just Russian. 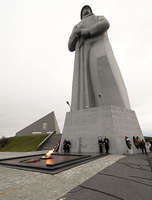 largest cities, located above the Arctic Circle. What people drawn to freeze clamped ends of the Kola Peninsula, to the places where two months of the year Sun does not rise above the horizon? The reason is just a port, the giant docks, factories, engineering works and terminals and especially long bay, which due to a branch of the Gulf Stream is the only northern port freezes throughout the year. This political group in Europe and played at the beginning of 1916 a significant role in the history of this otherwise forgotten area, located more than 1500 km along the railway from St. Petersburg today. The city and harbour were officially established in early October 1916, already mentioned, when Tsarist Russia had a different approach to the international maritime trade than just over the northern region, as during the current first World War II was the Russian coast of the Baltic and Black Sea to the south of the country under the control of enemy troops. Tsar's throne thus earned the decision to build a new port, named Romanov-on-Murman, in honour of the ruling Romanov imperial dynasty. In the same time as the Bolshevik coup in 1917 came the simplified name of the city, Murmansk. During the Second World War were the port and nascent city the target the vast German invasion that practically the entire area levelled with land. After the war whole Murmansk had to be rebuilt. Soviet architects and builders, however, his task with taste and by their daring plans created one of the most modern cities in the world. Heroes of that time still a monumental memorial recalls the heroic soldier "Alyosha," standing on one of the town hill. Murmansk and later won a pretentious title of Soviet Hero-City!

Today is already well postmodern metropolis, has, by virtue

of property through international trade considerable capital, which is supported by the massive production of water floats of all kinds. However, recently was the main source of finances, and especially the presence of Soviet and later Russian Baltic fleet with a large military base, where regularly set off nuclear submarines, capable of carrying nuclear potential in the global conflict destroy the entire planet. One such monster was the infamous Kursk, which in the Barents Sea disappeared in 2000. Golden Era of the city gradually declined and is declining today. Military influence waned as well as trade and economy, which was during the Soviet era controlled by central planning. Neither the strong state support, social benefits and interesting working conditions couldn´t stop the outflow of residents in southern landscapes or advanced Scandinavia. 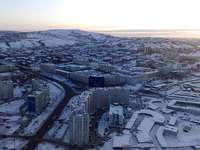 From the city with half of million people, disappeared almost a third of residents between 1990 and 2010. Murmansk, the largest city in the Arctic Circle so continues depopulated. In the Soviet era and worked here as something simple, such as central heating, but it is a thing of the past and so one of the last joy of local public transport remains efficient, largely provided by trolleybuses, which are not functioning transport northernmost of its kind in the world. Near the harbour is also a highly secret submarine graveyard, which several years ago visited the representatives of foreign media, to the horror noted that in northern Russia threatens another nuclear disaster. 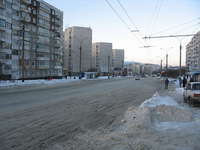 of the coves and many of them are reportedly still in and active nuclear fuel... Once proud city is still an important stop for commercial goods on the northern line. It works here naval academy, teaching and engineering university, which is again focused primarily on technical and commercial fields. Academics are available to the world's largest sailboat - Sedov. As in other polar regions there are two summer months in the sun almost never sets, (5.22 - 7.22) and this is the best time to visit, while in winter the sun is not based two months (29.11. - 15. 1.).

To the city is best to get by train from St. Petersburg, 1500 km distant, the journey takes about 45 hours, or aircraft. The city is also the starting point for trips to the archipelago of Svalbard, New land island, or expeditions to the North Pole.