en.infoglobe.cz » Do You Know That? Somali Mogadishu Today And Tomorrow II.

Do You Know That? Somali Mogadishu Today And Tomorrow II.

Published: 8.7.2012
The city, which story we have in terms of historical context outlined in the first part of our contribution, entered into closer awareness of the early 90 years primarily as a place of immense suffering, chaos and lawlessness. What was later fate and will its people live in better time? This and much more you can know.

The colonial system, however, persisted until 1960, when by the union was established a unified Somalia. Another break point came up in early 90 years, when the militia was overthrown by then surviving a dictatorial regime of President Barre. The winning party, howeve

r, failed to agree on the basic question, who will take power over a free country. The ideal basic of civil war between various factions, which result was the deaths of tens of thousands of people, was total devastation of the city, famine and epidemics. United Nations sent in 1992 to the country, observers and humanitarian units with the necessary assistance. With them are not far from the city and landed on 20,000 U.S. marines, whose main objective was to capture the most radical leader Farrah Aidid. Making a mission code-named Restore Hope is the theme already mentioned movie. Captivity two members of Aidid family consultants and subsequent helicopter operations, downing and fight for his life in the gloomy streets of the town are portrayed exactly as they had occurred in 1993. Losses on both sides: 19 members of the Navy and about one thousand Somalis. Within two years of unsuccessful actions left the country as well Americans

Relatively recently, in 2006, flared up again between the potentially strongest passions pro Islam factions. Resulted were a bloody battles with nearly 200 dead. Government took the radical Islamic Courts Union militia, but hard to enforce strict Islamic Sharia law and in the streets again, there was consternation. In addition, the dispute involved the Ethiopian army and the conflict did not take long to wait. Islamists and fled into the city so he could return again chaos, violence and war, individual clans.

In recent years, Somalia has experienced a relatively calm and clear signs of developing cooperation and foreign investors, which is de facto the only way to restore at least partial prosperity. Even if it is necessary to add that everything would probably be better than how i

t was here the last 30 years. Transaction records the fact that here the influence of controlled economies do not work nonexistent taxes or regulatory fees. Industry especially reigns oil processing and textile production, but international sales are considerably damaged by regular attacks by pirates, as they often hear in the news. The international airport is well marked by years of fighting. Today, 2 times per week fly regularly perhaps Turkish Airlines. Conversely, excellent (for African standards) telephone operators work here and even internet. That does not mean that these services are somehow fundamentally changing the lives of ordinary Somalis. The annual droughts and associated famines decimated hundreds of thousands of people each year, while risk is nearly 5 million more. International assistance from past experience very seriously, foods are traded on the black market and again kill for them.

Mogadishu as the capital of the future! So it tries to render the promotional flyers. A country where until recently there wasn’t exist a foreign embassy 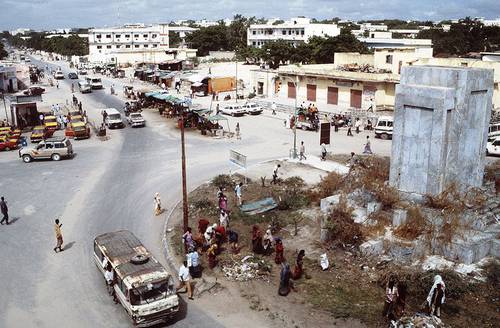 or functioning courts is closer to reality. Great personalities of the country and perhaps the only hope of Somalis, it is the President Sharif Sheikh Ahmed. Or at least it tries. Recently the first decades after the united city, silenced the radical Islamists and the world second set, pale face of the city and country. Local people build the hospital, repair the road. They support the sport! Even the football game was infidel dogs and watching it, let alone a game, was punishable by death. Any form of entertainment was forbidden. This was just to survive. Today it is otherwise returns to the city life, which is after twenty years of civil war actually on time.

I do not know if this post more warning or tip on a trip, but be at your place I would better wait a few more years and rather spend the summer on Máchovo lake, Canary Islands or the Bohemian Forest. But to adventurers I can´t recommend a better enjoyment than just Mogadishu...!

Do You Know That? Somali Mogadishu Today And Tomorrow I.

Published: 1.7.2012
Black Hawk Down - a memorable message of the cult classic war film bearing the same name, whose action story takes place just on the streets of this East African capital, famous for its poverty, cruelty and crime.

Published: 15.9.2010
Somalia is not a country where the toutists travel with interest and pleasure. Despite this fact that actual political situation is not good for the time being, the country merits not to be omitted.