en.infoglobe.cz » Do You Know That? The Biggest Glacier Of The World

Do You Know That? The Biggest Glacier Of The World

Published: 11.9.2011
Our wandering to the greatest glaciers of the world will lead us this time, to Patagonia, where really imposant nature formations are to be found.

Anyway, nearly anybody would find this greatest glacier just in South America. You cannot doubt, of course, about the fact that both world poles belong to the greatest glaciers. Nevertheless, continent glacier will take our interest this time.

This glacier, bearing the name of Hielo Continental Sur, is situated in Los Glaciares Argentinian National Park. Evil-eyed theatre of ice-fields, with background of ice fields of Ands-Mountains, the peaks of which reach, in this area, the altitude of 3000 metres above sea level. Rough climate as well as high precipitation sum, all these create ideal conditions for keeping of gigantic iceberg, the dimensions of which are: 350 kilometres of length and 40 kilometres of width, wheras ice-power exceeds, in some places, even 1000 metres. Total extention makes approx. 14000 square kilometres. We note that in any place of the world (with the exception of both poles), more consistent ice surface cannot be found. The glacier drops subsequently, from several thousand heights, practically to sea-level, where the climate is much more warmer.

And just inside this area, known as Perito Moreno, it is possible to follow effective spectacle, when immense pieces of ice are broken, under thundering rumbling, falling into cold waters of glacier river. The comparison with another glaciers seems to be impossible, as, for instance, the Alps glacier - Alechats - is only one hundred square kilometres great, as far as the extention is concerned. 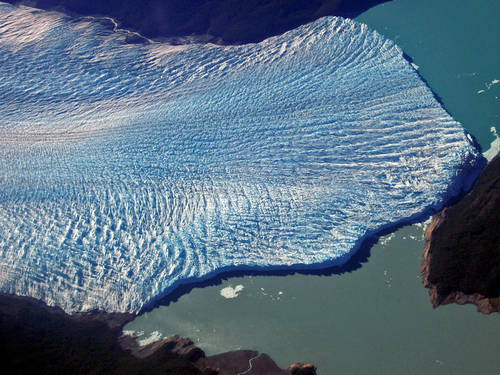 Anyway, the biggest show, which is possible to follow at such iceberg massif, it is repeating only once in the course of four or five years´ period. The glacier needs so much time for a fact, in order to make a barriere, with its volume, one of blind arms of the lake, known as Brazo Rico, filled in with water subsequently, and finally, to break through, with deafened rattle, glacier barriere, in order to be levelled both newly created basins (reservoirs) again. This phenomenon is known in Spanish under name of „rupture“ (breaking through). So, video-film registry of this scenery could be found easily. It seems as if this glacier would resist against actual climate changes. The surface is not reducing but it is increasing, and even its moveme 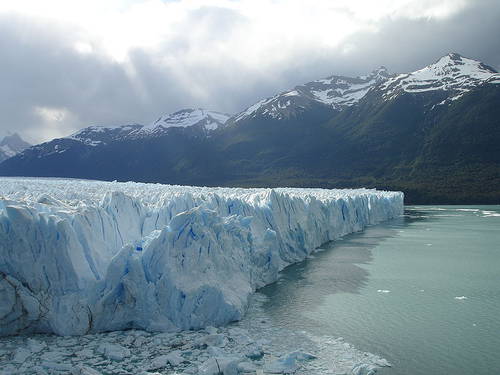 nt is, making comparison to the others,like of rocket - even two metres daily, as this movement would last for another glaciers for hundreds of years!

The access to such glacier chute is relatively good. As the starting point, it is the town of Calafate, 60 kilometres distant. From there, the tourist groups are wandering, in order to visit Perito Moreno area. The excursion takes, towards greater points of civilization, to the airport and Atlantic coast, five hours´ walk approx.

As far as the best favourable time period to visit this area is concerned, it is so called Patagonia Summer, i.e. period between December and March.

Published: 2.10.2008
Svalbard (Spitzbergen), goup of islands, placed on half-way between North Pole Circle and North Pole, rough Arctic wilderness, is a country passing through big changes. Through fjords, where the vessels of hunters and whalers, or coal-steamers flew in past, now, there appeared excursion vessels.

Published: 10.3.2008
Winter season in this year is, however, too mild, and not too favourable for skiing. You have to look for the snow and skiing possibilities abroad where the conditions for your activities are more favouirable as in Czech Republic. This time, you travel to Hintertux skiing centre, 550 kms distant, on border of Austria and Italy.