en.infoglobe.cz » Do you know, that…? The Volcano II.

With a respectable height of 3323 m above sea level is also the highest mountain in Europe in south of the Alps. Its height is steadily decreasing about of tens of meters by repeated eruptions in recent decades. Circumference of the whole mountain is 140 kilometres the base itself is spread over an area 38 x 47 km. It is almost one and a half times higher than Naples Vesuvius. In Europe is it only volcano, what is bigger - Pico de Teide (3718 m above sea level), which forms the axis of the Canary island of Tenerife. This mountain is also the highest mountain in Spain, although geographically belongs under the African continent already. 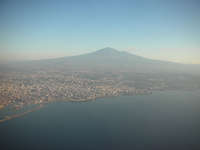 Aetna is one of the most active volcanoes in the planet. Her record of eruptions is almost continuous, but it did not stop Sicilian people to based vineyards and orchards on its fertile slopes. Most fertile area is the south of Catania. Just as Vesuvius also Aetna is a potential threat for the hundreds of thousands of people who just found a home in her shadow. The most famous cities at the foot is the port of Messina, Sicily's third largest city with over a quarter of a million inhabit, then Catania, which already was destroyed several times in history by earthquakes and eruptions, for the last time in the 1669th.

If you would decide to conquer the summit directly, you should know that it is practically impossible, unless you are a crazy or a volcanologist. Aetna erupts regularly every 5-8 days 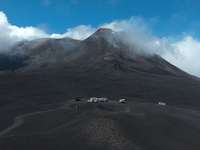 and heat from her throat fells a several kilometres from the nonstop hot caldera. It is possible to get relatively close - on the border of 2700 m above sea level, and you can choose between – cable - railway, off-road or walking. The last lift station is at an altitude of 2500 meters, you can continue only if the local seismological station does not issue a state of danger. It is important to realize that we are standing on the unpredictable mountain which is full of magma. The pungent sulphuric smell, ominous rumble and ubiquitous traces of ages old cold lava flows, creating incredible sculptures and shapes,

gives the idea of ​​how it looks around outside the gates of hell. Real brave gets on their own to see the main craters. Even in 1940 there was only a crater, today there are four - the largest and youngest Boca Nuova, Voragine follow, Northeast and Southeast crater. These are then supplemented by dozens of smaller cones. Most of travellers will use the output to just lift, which together with jeeps to transport the rig Torre del philosopher, to a height of 2900 m above sea level. Walking up would took the whole day, but according to a travellers experience you should walk at least the last part of the journey, because as you will see how incredible shapes and formations proved magma currents shape the age progresses. The path cross the lunar landscape, which is most of the year covered by a discontinuous a little bit grey layer of snow is probably the most impressive experience in the moment before the volcano wakes up alone. Around the trails are still visible

remains of buildings with ubiquitous ash which was buried by wave of lava in last decades.Ruins of the cable car station and observatory are the proofs. To the craters you can get just with an experienced guide and assuming that the volcano is one of their resting phases. Even so, you must have enough luck and courage, because the element of these dimensions does is unaccountable. Trip to Aetna for many people mainly one-day action, but it's certainly good to give the trip three days at least. In winter there are ski and resort operations, and that's really fun for the true lovers of adrenaline.

If you will decide to visit this monumental mountain and definitely do not forget pack the strong boots, warm clothing and sunglasses against the dust and ash.

Do You Know That? European Volcanoes I.

Published: 18.9.2011
Volcanoes - unpredictable threat and also natural work of art. A fascinating spectacle and fear-inspiring mountain, which can ever sweep virtually the entire population in the whole region, as it already happened many times in history.

Published: 30.5.2010
Sierra Madre (Sierra Madre de Chiapas in Mexico) is a mountain range, passing from north-west to south-east, from Chiapas state in Mexico, via Guatemala just up to Salvador and Honduras. This mountain range system takes approx. 80% of Mexico territory. At the same time, it belongs, with its extention, to the greatest mountain ridges of the world.

Trapani Is Placed In Sicily

Published: 22.8.2010
At the beginning of the summer, there was appeared on Bratislava Airport of M.R.Stefanik - till now quite unknown destination - Trapani Birgi. And just low introduction prices became a temptation to visit these attractive places of Italian island of Sicilly.

Do You Know That? The Biggest Glacier Of The World

Published: 11.9.2011
Our wandering to the greatest glaciers of the world will lead us this time, to Patagonia, where really imposant nature formations are to be found.