en.infoglobe.cz » Do You Know That? Unknown America II.

The open plains of the Midwest U.S., which we visited in the initial part of our new serial, also offer more adventurous places than just an endless grassy plain stretching from Canada to the border with Mexico. One such is the Indians revered the mountain bearing the mysterious name of the Black Hills. Sioux Tribe was still on the end of the 18th century the main inhabitant of the Great Plains and not otherwise was the case with this warrior tribe in the case of Black Hills, mountain´s island, which literally towers above the grassy plains on the borders of South Dakota, Montana, Nebraska and Wyoming. After that,

what has appeared in 1870 a military expedition cavalrymen GA Custer gold, was the gradual destruction and assimilation of Indian tribes in the first stage in ambitious plans for Washington. Sioux could face tens of thousands of new immigrants and prospectors who came to the Black Hills to seek his fortune. From that time, namely in 1876, also known story comes the bloody battle at Little Big Horn, where he pitched battle fought in the 7th Cavalry with General Custer with Chief of Runaway horse. Despite the crushing defeat the fate of Indian people more or less sealed. The Battle of Wounded Knee in 1890 formally marked the end of Sioux tribe, when the army massacred three hundred men, women and children. The kind of "war", respectively territorial, local repair of the Indian population was in 1980 awarded compensation for injury and collected at the $ 105 million. 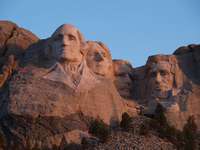 The actual Black Hills, whose highest point is Harney Peak (2208 m), are divided into two imaginary parts - The Southern Hills and The Northern Hills, a southern and northern part. And that latter hides one of the symbols of America - a monument on Mount Rushmore Mount. Giant faces of U.S. presidents Washington, Jefferson, Roosevelt and Lincoln, suggested in 1927 by famed sculptor Gutzon Borglum. Working on an 18-foot faces of 400 workers took nearly 15 years. The author works with the ceremonial unveiling, however, did not live. His own son took over the project, and so in 1941 he could see the light one of the most commonly displayed symbols USA, which annually visited by two million tourists from around the world. Few,

however, knows that the original design and implementation envisaged by presidents are depicted from the waist up. The financial demands, retreating crisis and participation in World War II, however, required structural changes, so now may seem somewhat unfinished monument complete. The whole building, a symbol of American democracy, since its inception eyesore indigenous inhabitants, but torrents of tourists to Indian casinos and souvenir shops compensate for this fact... 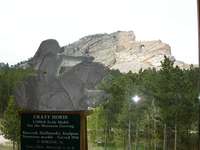 Black Hills, however, offer a number of other natural attractions, such as cave (Wind Cave and Jewel Cave) or climbing the highest mountain peak that is to Harney Peak, which is also the highest peak in the United States east of the Rocky Mountains. Furthermore, we find national parks, such as Custerův National Park, Bear Butte Park (sacred Indian territory) and especially the Crazy Horse Memorial, commemorating the famous chief of runaway horses - the largest statue of the world that still arises. Final dimensions should achieve the following values: 195 m in width, 172 meters in height. The head chief already exists and is 27 meters high.