en.infoglobe.cz » Do You Know That? USA: Broadway Musical

On the New York scene is not customary to set an end, thus closing night feature performances, she comes alone - in direct proportion to the interest of viewers of the show so you can imagine what interest is, even after decades of performances such as Phantom of the Opera or Cats that have crossed the border more than 8000! performances ...even for Hollywood stars of the silver screen has always been famous boards Broadway theaters always something magical, because to succeed as a theater actor, no refined movie magic was and is still evidence of a real actor artform.

Among the most famous scenes include theater as Ambassador Theatre (Chicago musical), Broadway Th. (Evita, Miss Saigon), Majestic Theatre, the main attraction since 1988 Phantom of the Opera - record holder in the number of re 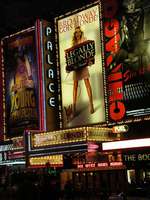 peats, or the largest of the theaters - George Gershwin Theatre with a capacity of 1760 seats.

In short, see the "right" in his Broadway musical environment is really something extra.

However, it has a large hook. Admission is very low, which is said very politely, and so thrifty Bohemians rather buy for the same money something else - electronics, or clothing. The musical will probably get only one who flies to New York as an important work which the host and to invite him, as it is customary in similar ways.

I saw this musical on Broadway only one King, a British governess in which several children visiting the oriental monarch, who Zahori to her great love - after all, the musical was filmed recently and went in our television.

I was on it with a colleague and a few surprises waiting for us. The first was that the 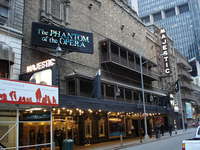 theater, very famous, has no a dressing room. Because we were there in winter, everyone just twisted coat under him, which was a few inches higher and I would be wrong for him to see, but it did the same, everything is settled somehow. The second surprise was that the elements of show - bussines production a person settled in five minutes and he did not come nor any special or disruptive.

Third and the most important was the enthusiasm with which the audience watched the performance of actors. So I am grateful audience in Prague and have not experienced our actors to their New York colleagues can only envy. Perhaps because the New York scene is sometimes inappropriate dream goal, in which they reach the ends of our few.