en.infoglobe.cz » Do You Know That? USA - Monument Valley

After one of the most detestable U.S. cities we will check this time the "wild" west to a place where she wrote much of the history and not just the fil 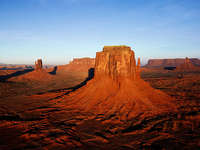 m. Monument Valley in the Navajo language called Monument Valley, which sounds like Indian language Tse Bii'Ndzisgaii. The large Colorado plateau as if she was not of this world. Jagged rocks with a high proportion of iron ore, which in the setting sun plays by all shades of red colours, unbearable hot and by billion stars full night sky. Everywhere just rocks, dust, sand and space bounded only vague silhouette of the Rocky Mountains on the horizon. Straight roads lead through the lonely space, the air shimmering horizon and all around the rock, which monumentality gave unique atmosphere to this place its.

Sandstone rock formations rises to an average height of 300 m above the large pits on the border between the states of Utah and Arizona north to the south. Looking at the map with a little tolerance can say that the entire area falls within the so-called Four Corners point - the point where the borders meet four states: Colorado, New Mexico, Arizona and Utah. This whole area is under the Authority autonomous Indian reservation, whose inhabitants are mostly descendants of Navajo. 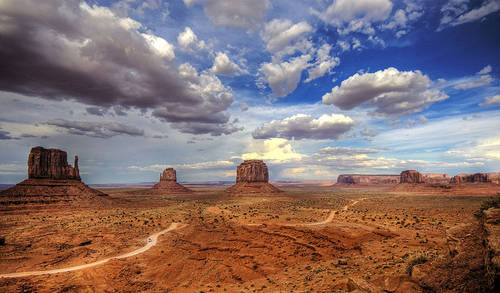 List of films in which he played these stone cone, they would be the envy Many of the stars of the silver screen. The entire list would take more than one article absorbes, even so we can remember the most important and best known:

Were filmed here, most American Westerns, especially those of John Ford and John Wayne in the lead role ... Kubrick's 2001: A Space Odyssey, Easy Rider with Peter Fonda and Dennis Hopper, Once Upon a Time in the West Sergio Leone ... I also ran Forrest Gump Robert Zemeckis! Ridley Scott here planted a scene from the movie Thelma and Louise. His climbing skills are tested by Tom Cruise in the latter part of Mission: Impossible. And always there filming commercials, in which it was necessary to emphasize the romantic landscape of rugged, hard-bitten men (Marlboro), a beautiful car (Mustang) and many, many other films and television spots breathing the freedom symbolizes spirit of America. 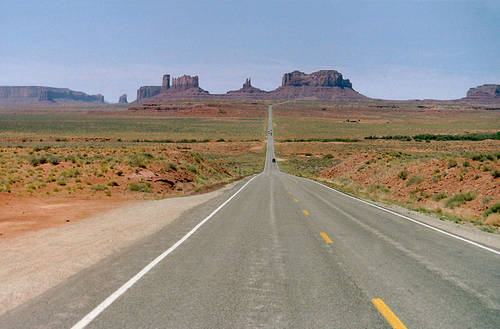 And no wonder that this great country wants a piece of your own eyes and see thousands and thousands of tourists every year, which is also one of the main income of Indian tribes, which, however, after centuries from teepees moved into a relatively cosier casinos and smaller cities in the four interfaces States.

A Visitors of Monument Valley Navajo Tribal Park, which is the official name of the reservation, must pay an entry fee for a particular kind of way. In 30-kilometre long trip on a dirt road they pay 40 to 100 U.S. dollars. Price depends on the use of specific ro 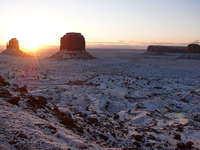 utes, lease obligations to the wizard and type of used vehicle - from the horses to off roads. Who wants to see everything from above, may fall from May to fly a balloon or small plane. The Indian reservations are also subject to strict prohibition, so a cold beer even in this heat is not an option. Maybe it's because alcohol had previously been the scourge of the Indians themselves ... or just a practical administrative decree.

The whole valley is best to see from a considerable distance as well as shooting, it is the only way how to get all the essentials to one shot. Needless to say, the ideal light conditions are early morning and at sunset when the colours are impressive. My favourite motive is also known road No 163, disappearing beyond the horizon just a system consisting of peaks and rocks, Monument Valley, one of the symbols of the U.S. ...