from one lake into the next one. Along plain limestone headlands, between water flow, dense green copse of moss shine through water fog, and these moss copse hover frequently as curtains from wet glittering rocks. Among powerful slopes of Croatian mountains of Licka Pljesevica, Mala Kapela and Medvedjak, National Park Plitvice Lake is protected with fascinating and roaring water world with its wonderful rocks, caves and deep forests. So, sixteen transparently pure lakes of Plitvice basin are created as a result of biological and chemical process, which change water flows all the time, transforming the lakes and creating new cascades.

Twelve upper lakes of this karst basin were accumulated in front of barriers. They are

increasing all the time, thanks to sediments of calcareous carbonate, and the mass is eliminated below. So, the organism accumulate subsequently always hihger and higher limestone piers, stopping the water and creating new and curious cataracts, reaching the height of even 80 me

tres. The travertins are very fragile and sensitive calcareous formations, growing of 1 cm each year. It occures sometimes that the water break off some parts of soft limestone piers, and so, the way to the next lake, situated in lower position, could be broken through. Young moss is green and soft, because no travertine was excluded yet. Anyway, after a year, when limestone connections (lines) come into existence on bottom part of moss copse, the plants turn dark. Older moss is rather yellow, covered with calcite layer. Succedssively,  the mass petrifies and dies. So, biological-chemical combination between minerals and organismus is very sensitive.

The water is polluted and muddy. Even small trace of sediments could destroy completely this easy wounded balance. Just near to the bridge across Koran-river, where you can see signs of origin of new lakes and cascades, the water penetrates so many organic stoffs that travertin

growth will be stopped suddenly. So, from this reason, the visitors are led towards the vicinity of lakes and waterfalls, on wooden pavements only. Four lower situated lakes were developed in just different way. They are karst caves, where their ceiling is fallen through. However, great part of water from upper lakes is soaking through calcite bottom and underground caves are washed out. In the neighbourhood of lower situated lakes, at least twenty caves of such type are to

be found. If their vault falls down, the precipice is established, filled in with water quite quickly, and so, the lakes are formed. Nevertheless, Plitvice Park is changing all the time. So, for example, water level of several lakes stepped of 0,5 m during 35 years only. and so, the forms cascades outlines were changed.

Anyway, the lakes and cascades are fragments from total park extention, which makes nearly 300 square kilometres. Local dense forests, including surrounding karst countryside, are protected as well. If these vast forest areas were missing, so weather influences would quickly disturb

the rocks. Fragments of rocks and gravel would fill up the lakes and so, fragile travertine cataracts would be destroyed. Dolomite soil in neighbourhood of upper lakes and spring brooks are covered with coniferous trees, hornbeam forests and mixed pine-beachwood copse. Limestone soils, situated in the environs of lower lakes, are covered with pine- and beachwood forests. The ferns, maple bushes and heath are growing luxuriantly there, where the wolves and bears are hidden. Nevertheless, you can hardly meet brown bears in free nature (countryside). You can more probably meet them in parking place, in front of park entry. The animals rake over rubbish baskets. 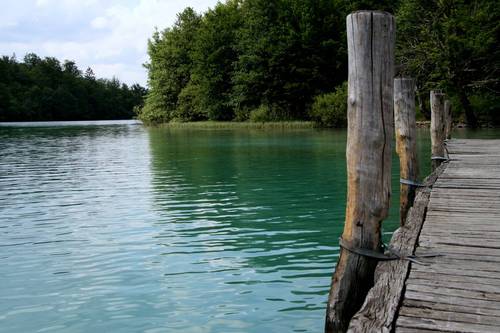