Published: 13.9.2010
Eco - as well as agro-tourist activities become new global trends in relax or advanturous travelling, and many countries, including Puerto-Rico, reply to this direction in positive way.

Eco-tourist activity (as a branch) was developped from ecologist movement, at the end of 1970-1980. A couple of years later, this activity represented the quickest section of the whole tourist branch, and it grew up from 20% up to 34%. In 2002, this activity represented a market in USA corresponding to the value of 77 billions of dollars. Later, in 2004, this eco-tourist activity and travelling in the nature grew three times quicker as world tourist branch as a complex. According to the magazine „Travel Weekly“, this alternative tourist activity could form till 2012 even 25% of worldwide tourist movement, and so, its value could be increased to USD 473 billions of a year.

So, the eco-tourist activity presents, in its substance, consciousness and responsible tourist activity and travelling, aimed at protection and improvement of nature environment, in the same way, as maintenance and beneficence of local and aboriginal inhabitants and their cultures. It is often a question with educational ingredients (parts), which are unique on its each place as well as in each experience, and substitute so called „Consum travelling“, which offers nothing more than quick plaster to our pains or escape from every-day way of life.

So, many companies in Puerto-Rico, as well as of neighbouring islands, reply promptly to

increased global interest for more healthy and better kept life style of travelling. The eco-tourist activity understands all, from organic gardening and farming, via corporal and spiritual (mental) state of mind, up to ecological architecture, the alternative sources, re-circulation of litter waters, use of rain waters as well as re-cyclacion in intelligent way. The owners of small boarding houses and luxurious hotel chains are aware of the ecological - but also economical benefits (advantage) which brings such type of eco-tourist activity.

To one of form of ecotourist activity belongs so called agrotourist activity, specialized mostly for experience from agriculture and farming. Many family farms all over the world react (respond) to increased interest of travellers for rural traditions as well as their life-style. Whereas the farmers, who offer to the visitors their hospitality and education in a range of traditional and organic farming(they have there a chance of their supplementary profit), so,on the other hand, the visitors obtain unique experience, including direct view into „reality“ of farmers´ and rural way of life. 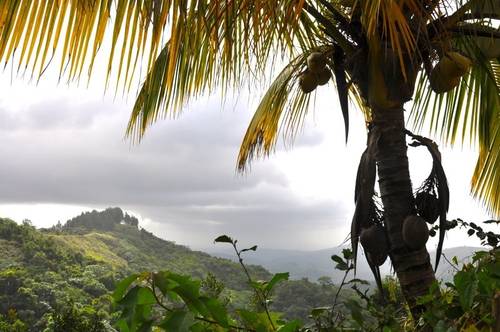 So, we have chosen three completely different localities and environment, (within scope of Puerto-Rico), for intuitive demonstration, as follows:

As the first stop, it was small town of Rincon (it means „snug corner“ in Spanish). The

community is situated on west coast of main island at Caribbean Sea. Just since 1960, this small town developped, thanks to surfing activity, world famous destination. The reason for a fact, why surfing is so unique for presence of coral cliffs. It is a home of menaced sorts, such as elk-horn corals, sea turtles or immense number of cliff´s fish, dolphines and even keporkak - umpback - whales, which came there in order to be copulated. The whales represent the highest register of healthy ocean millieu, including its biological heterogeneity. In 2004,  the reservation „Three Palms“ was founded

there, in order the protection of menaced cliffs and sea life for future generations could be maintained. Most of local companies replied immediately, with education (teaching) of their clients, how responsibly visit local beaches, water sources and nature, including publicity of local fruits and products, with a target to improve life-environment. So, eco-tourist activity is a main attraction mainly for family and group visits. The tourists could prove there all activities, starting from works in local farms with rescued horses, diving among coral cliffs, whales´ watching, up to pickling of various tropical fruit directly from trees. And just the trees gave a base to new development of so called „Tree Houses“, which become more and more popular, as many visitors prefer their holiday in rather private way and way „back to the nature“.

As our second stop,it was mountain small town of Adjuntas, placed along mountain range in

central island, nicknamed (owing to rather cold weather) as „Small Switzerland“ or also „Sleeping Giant“ (according to the form of its highest peak). The combination of subtropucal climate and cold nights (owing to high altitude) offers to this region the ideal conditions for growing of many tropical products, mainly coffee. This product has its specific taste. Its highest quality has got its important position on the international market.

The farms with coffee are main attraction of agrotourist activities at the same time, and are a target for visitors from USA, Europe and also from South America and Japan. We have visited the farm Hacienda La Florida, which is situated along steep hills at the extent of 220 acres. The owners, Sandra and Israel Gonzales, look after28 thousands of small coffee trees, all planted and treated by hand. Except coffee, a rich assortment of tropical fruits is planted there, such as: oranges, grapefruits, mandarines, including unknown fruits, such as: mamey, chirongs, pitahays, tawas, starfruits, caimito, guavu, breadfruits or zappotes.

Our third stop was made in small island of Vieques in Atlantic Ocean, not far from east coast. In past, the island was closed for public (for sixty years) owing to the presence of American Navy Army. So, the tourist activities were not developped there. Anyway, sinc

e 2003, when the army left the island, the area became quickly an attractive destination. At present, the place is published as untouched seat„Old World“, with magic countryside and desert beaches. At present, the place got the reputation, thanks to eco - and agro tourist activities. As a remarkable appearance, there are two original bio-luminescent bays. The first one, known under name of „Mosquitos Bay“has the highest concentration of this luminescent fish of the world. We set out, during non-moon shining night, led by Mr. Aby, local legend, on kayaks, and got detailed information about these one-cell organismus, creating the light just in a moment when they feel a movement at their neighbourhood. The visitors can follow such surrealistic spectacle, when they start themselves to move or swim inside warm waters of this bay.

Several groups in the island make the publicity of real estates, mostly for residential but also hotel use, wh

ich are completely cut off from public electric nest. So, for instance, Hotel Bravo, was changed into small boutique unit for fully function mini-eco-resort, where all, starting from meals and drinks, served to guest, up to needs and products for resort-maintenance, comes from local production. The technology of actual basin is being re-built to salted water, which does not require use of any chemical compounds. In near future, the whole complex  will be supplied with solar energy only. Beside direct ecological incidence, the interaction with local community is also published, and even the educational programmes and international seminaries are being prepared, which could help to support such practice all over the world. 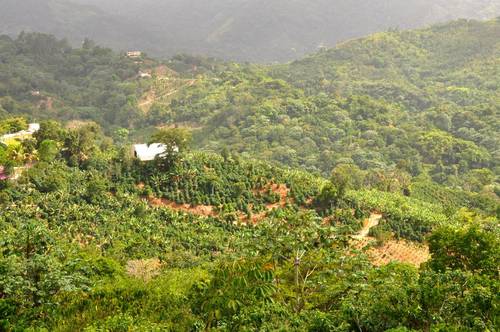