en.infoglobe.cz » Russia: Vladivostok – At the End of a Long Journey I

It is long time since we were talking about

podívali do Russia in our Sunday series. Now it is time to return to this “large country” and find a topic that would give us an idea of the most distant places of the world. We return again to the Trans-Siberian railway that puts interesting places together as beads on a thread. All thanks to work of millions of hands. At the beginning it would be appropriate to repeat some basic facts considering this railway.

The Trans-Siberian railway starts and ends in Moscow. On the other end there is the port of Vladivostok. These two points are 9288 kilometers away of each other by rail on which there are connected many other transit routes. It creates a backbone of national transportation Expresses and rapid transports departure every second day from Yaroslavsky station, Moscow, to their six-day journey. A third of every cargo heading to the east consists of TEUs with 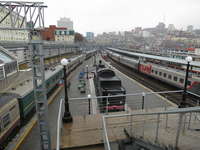 s Chinese a and, mostly, Japanese goods. These goods are unloaded in Vladivostok. Carriages are constructed to withstand temperature from -40 to +40 degrees Celsius. The track goes through 89 cities and over 16 large rivers, it runs across two continents and eight time zones. All for one ticket! A ticket from Moscow to Irkutsk is the most popular destination that is situated by Lake Bajkal, and it costs around  1500 - 2000 Czech crowns, depending on a travel class you choose. There are two, i.e. three of them. The cheapest, folk, is also the funniest and it costs around 160 - 230 EUR, the second cost 120 EUR more. The cheapest ticket on the whole track will cost you (if you buy it soon enough, at least a day before departure) about 230-330 eur, according to a type and speed of a train. If you choose fast transportation SK FIRM you will spend about 20 hours less in train, normally it would be 162 hours. And we could continue on and on. Since we already wrote some articles on the Trans-Siberian railway, this description is sufficient for now.

What we already know. After 160 hours we find ourselves on Vladivostok station. What we can expect of the city the name of which means "The Ruler of the East "? Proximity of China and

DPRK is related to historical influence of south-Asian nations and cultures, mostly Chinese that administered this region until the end of the 1860s. A settlement and small fishermen village changed under Russian influence to a trade crossroads between Europe and Asia that is represented mostly by Japanese export. At the beginning of the 20th century, an important city emerged here that was connected to other Russian and later Soviet cities and important Japanese or Chinese ports. In the 1890s a construction of the already mentioned Trans-Siberian railway began. New hotels emerged as well as theatres, public transport and other achievements of this port city. Towards the end of the Great War,

migration caused that the population quadrupled from 100 thousand to 400 thousand. When Bolsheviks came to power, they caused new migration but out of the city, this implied also to large number of Czech legionnaires. In the time of the Soviet post-war era, Vladivostok was the home harbor of Siberan and later Pacific fleet. The city was closed for immigrants and foreigners until 1992 when life got back to civilian hands.

We will talk more about interesting facts related to this city next week.