Published: 27.3.2009
One of most impressive submarine worlds is situated in places where human race history was written. The banks of Red Sea are firmly fixed with Biblical thema. Nevertheless, most of visitors arrive here owing to beauties and treasuries, found below sea level.

The Red Sea obtained its „coloured“ marking probably in connection with red sea-weed (Trichodesminum erythraeum) which colours the water, within his reproduction period, into typical red shade. Red Sea belongs to Indian Ocean. 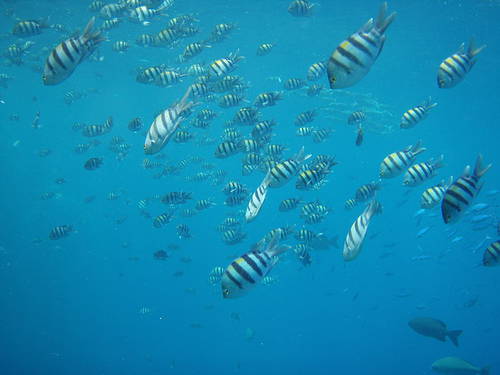 Its waters wash the banks of Arab Peninsula on east (Saudi Arabia), on west African states of Yemen, Eritrea, Ethiopia and Egypt. From north, these waters wash the banks of Israel and Jordan, in the environs of Arab Peninsula. The distance between those worlds is 350 kms only (this is also average width of Red Sea, whereas its length is much more expressive, i.e. 2000 kms). The extent is 450000 square kilometres approx., whereas the greatest depth moves to the border of 3000 metres, and average 600 metres only. This fact helps (contributes) to relatively high

temperature of water. So, local waters literally overflow with life and submarine vegetation.The orientation in these waters is, from this reason, very difficult, as the shore is very rough and inhospitable. There are to be found here relatively few ports, but, on the other hand, Suez Canal has more that international importance. As far as the ports are concerned, there is worth to be mentioned some localities, such as Bur Sudan (in Sudan), Masawa (in Eritrea), Dzhidda (in Saudi Arabia) and Mokka (in Yemen).

As mentioned above, the area of Red Sea plays one of important chapters in Christian´s history. At that time, Moses gave a sign (in places where there is  heading Suez Canal at present), and the waters stepped asunder, and persecuted Israelits could pass on dry sea bottom in Egypt. So, its banks became, in the course of thousands of years, witness of rises and falls of many civilizations. Arid mountaneous countryside of Al Hijaz Mountain Range is, on several places, spaced out with vegetation belts, however, this vegetation steps back (in the course of centuries)

endless sandy dunes. Nevertheless, this phenomenon which allures the visitors, is quite distant from dry and arid places. Red Sea, and especially the world below its water level, is one of really nature wonders (this fact was valued by Jacques Cousteau, world-famous scientist). The diving was for him allegedly best experience. Local sea-waters are more salted as in most other south seas. Local hard winds, together with extreme high tempereatures cause, that the water evaporates very quickly, and this fact creates heavier salt concentrations. From diving point of view, these very popular localities have, howere, its special forms of risk. These are synonymously hard sea streams, which could carry away its victim unto unexpected distances, and it could be hardly impossible to release its influence. The richest submarine area present coral cliffs, situated at West African coast. Local submarine fauna and flora is, except some items, different from those Mediterranean. There is no indigence of sharks, rays, turtles and dolphins, not speaking about enormous quantities of variegated inhabitants of coral kingdom, mollusca and crustaceans. When you plunge into crystal pure waters, you hardly realize that you swim in immense earth cleft,

established 35 millions of years ago, during rugosity of African Continent.So, hot springs are, together with submarine streams, really deceptive risk factor of submarine sporting activities.

Experienced instructors as well as diving basis are to be found practically in each sa-coast village. Here, you can also reserve one-day excursions into certain locality, specially marked out for maximal enjoyment and safe of draught. However, the visitors have to take into consideration quite stressed presence of several sorts of sharks. These animals, naturally, belong here, so they occupy their nature position. The diving is most popular in islands environment (Brother Island). This locality became very popular, thanks to possibility of night diving, among crowds of phosphorescing small fish. Nevertheless, the beauties of Red Sea are not only the question of animal empire, but, first of all, by marvellous coral copse (they can reach up to 30 meters diameter). 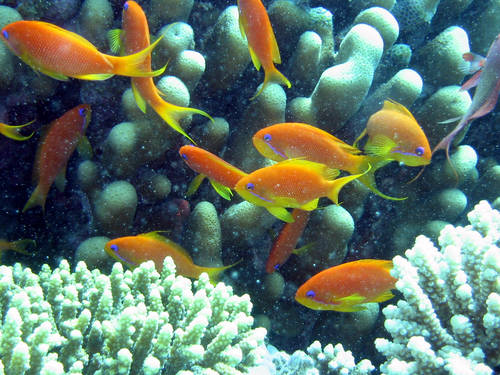 Rough sea bottom offers also many adventure in caves and rocks, even raised with ship-wrecks (they found its tombs here since middle of 19th century till 1980, when maritime navigation reached certain level). In local waters, you can find even untouched merchant ship of 2nd World War, now completely covered with impenetrable coral - layers of strange colours and forms.

In general, it is quite complicated to say something more about the submarine paradise ion indirect way. Nevertheless, it is obvious that you do not remain at one draught only. If you decide to try this special sort of sporting activity, we recommend you to start just here.