In the last episode, we said goodbye on departure from Verona and today will be first part tells the story of one night in Venice. 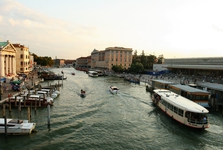 If you don’t have sufficient budget and sufficient amount for lodging in the city, we recommend you use one of the large camps on the mainland, which in Rialto, Campalto or Begaron are several reasonable and coin in them can be rented with a small cottage, which is the challenging Venetian features more than reasonable solution. The campsites are close to most of the local public transport stops, which will take a couple of minor less than 15 minutes directly on the main Venice's Piazzale Roma bus station, which is also the main habitat and the starting point for cruises, provided they decide to spend some time on the vaporetti - slightly variant overpriced city bus, metro and tram too. 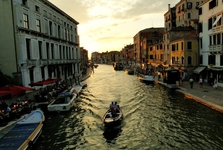 form incomprehensible labyrinth water kingdom. Modest and noble bridges and footbridges, and of course gondolas - symbol of Venice. This vessel was first shown in the 15th century, but in that time the hulls of these ships played virtually by all the colours. Traditional black colour is compulsory from 16th century. Today the channel really busy, but few, however, who knows that until the early 20th Centuries gondolas were just the only approved means of transportation to this island city. It was, except that at one point the water was up to ten thousand of these black beauties. Ships are virtually the only way of public transport today.

Here don’t look for yellow taxis or buses. But let´s get back to our journey. When we checked in and moved to the outskirts to the mentioned square calle 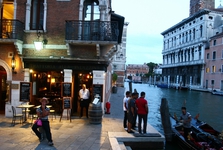 d Roma, which you can´t miss, even if you can park your car in a nearby parking monstrous tower awaits a decision where to go further. You might be taken aback that the maps are in short supply in Venice, but despite this fact I recommend you buy some, because the feeling that somehow always did find it, it is not entirely the right. Even if you go with a crowd of tourist on busy promenade and just for a moment lose orientation or you will go off the main corridor, you can get stuck for hours in the maze of confusing and blind alleys, passages, courtyards. Hopelessness increases with walked miles and culminates when you go out for the third time on the same deserted square.

About the information boards, maps, or perhaps just a small advice from local natives you can only dream of. If you meet someone after all, and he will give you advice, you have 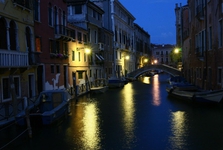 immense power to develop an understanding of the direction of travel, which proud Venetian try to explain to you. Nevertheless, it is clear. Five left, three right, then straight on for a long time to walk to the water, which is actually in Venice council of gold. Thank and go on the journey. After twenty minutes of brisk walking come back to it deserted square, and then sit down on the stairs of a smaller church or palace and want to cry.

In the few hours spent by marathon in one of the most luxurious and most expensive cities in the world, except you Piazzale Roma bus station and saw virtually nothing, even though the courtship, after all that Venice is not only attraction of the tourist gu 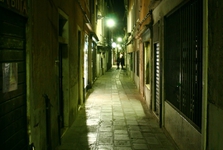 ides. Do you know where the north and south where, not to mention the other side of the world. Smart phone with GPS are either already good discharge, or have it as I forgot the campsite. Your partner starts to have either hungry, thirsty or wondering how you sold or exchanged for a last opportunity to see their neighbours, before finally falls from exhaustion. Cafes and restaurants close slowly, approaching midnight, and the Piazza San Marco, Your initial goal is God knows where. Resign and again luck in trying some of the other streets. Have you do not care that you do not see famous Rialto Bridge, you do not give your wine on the banks of the Grand Canal, you won´t feed pigeons in St. Mark.

When I'm in one of the many guides read that in Venice maps de facto needless due to the perfectly-arranged marking the main tourist attractions, I would like the author of this post personally met and walked with him the night city. Yes, Venice has certainly clear signs, but only in places where we have no chance to leave the tourists flock extremely motivated. But at least give the little arrow to the side streets, that indeed no one thought ... well sweet Italy.

As our tour ended, you will learn as early as next Sunday. So fingers crossed!