It is very close for us from Gobernador Gregores town down to El Chalten. Only 300 kilometers. But it is not a frequented road so it is almost impossible to hitch a ride. We wait the whole day but we don't give up. We hitchhike on the following day as well and finally get lucky when Joe, a women from Nez Zealand stops her car for us. Eventually we would ride these "mere" 300 kilometers about 7 hours. Why? Well, first there is about 60-kilometer section of unpaved road, second we often stopped to take pictures as Joe is a photographer. I was glad that I hadn't have to ask her to stop. Third, we helped local farmers to catch a calf. The three-day old calf got lost and way on a run. It wouldn't survive long in this hostile landscape. Fortunately, we caught it. 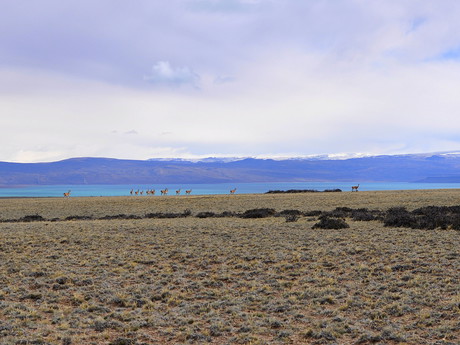 El Chaltén has this atmospehre of a classic tourist resort. All the towns along Ruta 40 road down south were rather transit towns. Here one can see that tourists flock in. We don't want to stay at a hotel for we could have an apartment for two for almost the same price. Cold and windy weather prevents us from staying in a tent. It would turn out a good decision as it would be snowing and windy on the day to follow. Well, it is not a weather one would set out to the mountains in. We wouldn't see anything.

El Chaltén is the youngest town in Patagonia. Hence don't expect to learn much about its history for this is purely a tourist town. Tourists who love mountains and hiking flock in here from November till May. We are quite surprised that to enter Los Glaciares National Park one doesn't pay any admission. Moreover, there are places marked for camping for free. 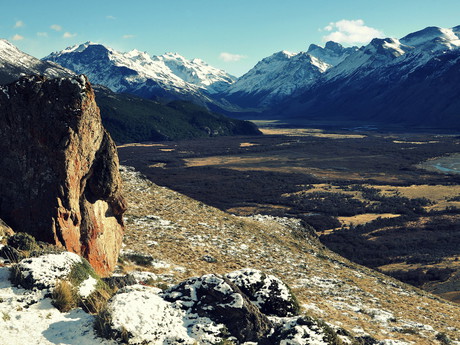 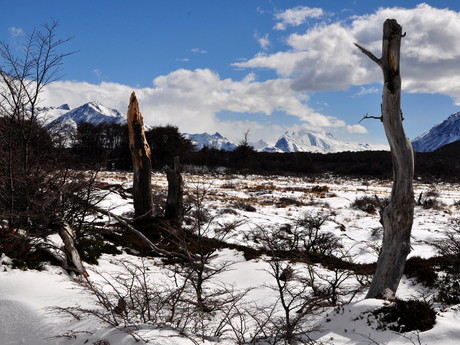 The trek to Chorrillo del Salto waterfalls is probably the shortest one. The waterfalls are situated in close proximity to the city. Our first trip goes to Laguna de los Tres and

then to Fitz Roy mountain. The latter is quite a special mountain. It is 3 405 meters high and is among the hardest mountains to climb. Even though it is not that high it is still whipped by sharp wind and covered with ice. The indigenous people called the mountain Chalten which means Smoking Mountain as the mountain seems to be always veiled in clouds. Therefore it was beileved in the past that the mountain was actually a volcano. Francisco Pascasio Moreno named the mountain Fitz Roy in the year 1877. The name goes by the captain of the ship Beagle – Robert FitzRoy. 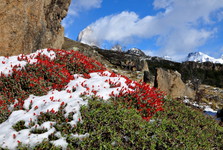 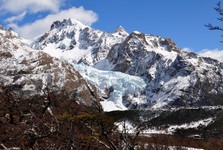 The weather is good and more tourists make trek at this time. It must be really crowded during the main season for even now the number of tourists around here is quite formidable. At first, the slope is quite steep yet nothing too dofficult. We pass Laguna Capri and reach the lookout point in about 4 hours. However, we don't go directly to Laguna de Los Tres for the trail is covered in snow and difficult to pass. We use the trail which passes Laguna Madre and Laguna Hija to get back. The number of tourists here is much lower. The main attraction is the vista over Fitz Roy. The entire trek took us about 8 hours and we walked 26 kilometers and crossed 500 meters of elevation. 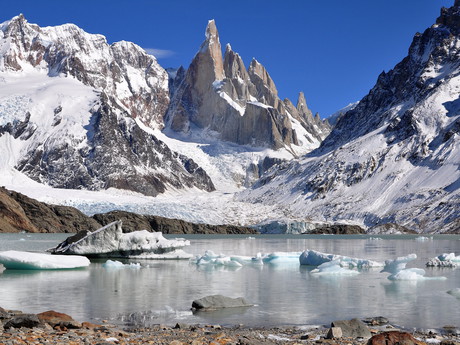 Next day we go toward Laguna Torre where we may enjoy the vista over Cerro Torre mountain. The only disadvantage of such trek is that you return along the same route. However, the vista over the lagoon and pieces of glacier flowing in it is sure worth it. We walked 21 kilometers in about 7 hours.

People who love mountains and wild nature will enjo El Chaltén with its surroundings. They surely shouldn't miss it.