en.infoglobe.cz » Austria: Alpentrip XI. – By Car To The Roof Of Europe I.

And because our holiday is under the passwords that the journey can be a target, we de

cided otherwise tedious and annoying for many and a return to diversify crossing one of the most highest mountain roads in Europe, around the mountain Grossglockner.

Everything nice must finish once, as well as our journey, thanks to last the mountain stage was named Alpentrip. From the sunny Carinthia, after three days spent hanging out at the lake Weissensee, in one of the most beautiful parts of Austria, we headed to the northwest. Most travellers and holidaymakers Adriatic passes this province more or less unnoticed, since the region around the border town of Villach are crossed at night or early in the morning, during a trip for Croatian beaches. But we were still interested to discover the interesting places off the main highways, and so the choice fell on relatively nearby alpine road goes across the ridges near the highest Austrian mountain Grossglockner (3798 m). Short meeting with a map, tracing the route and return to the places that I visited during the peak of puberty, when I travel any longer rather annoying and most I've slept. Not so Grossglockner Hochalpenstrasse, that I remember well, despite the years more, and I already knew it once I conquer himself as a driver. So today is the day when this dream comes true I guess. 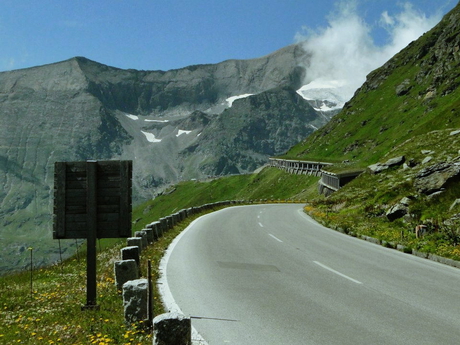 True, it's not the shortest way home, but as I have already indicated, certainly was not the purpose or intention in any way to hurry and she was in the game yet another stop near Salzburg Hallstatt.

About an hour crossing of Lake Weissensee to the foot of the Grossglockner, ran quite quickly. For windows alternated beautiful scenery and even weather hinting that today's the perfect day to visit one of the most remarkable places of this part of the Alps. 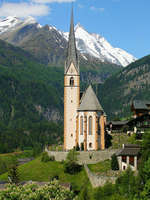 bly the most famous alpine road leading into the heart of the National Park Hohe Tauern, High Tauern, therefore, begins in the village of Heiligenblut, which itself carries the finest quality law degree village whose dominant feature is also already mentioned mountains especially slim tower, which is supposedly hidden One of the most sacred relics - bottle with the blood of Christ (blut). Earlier today the chapel and the church dedicated to St. Vincent, was the place where the body was found Brikcius Danish prince, who was killed in 914 during a snow storm on his way from Constantinople. And it was he who was transporting ONU mentioned and later found relic. Today's splendid altar and honour this place are evidence of piety local highlanders that persists for centuries.

Heiligenblut is a village actually with a non-stop tourist season. In winter there are wide ranges of ski activities and in summer the surrounding peaks attract 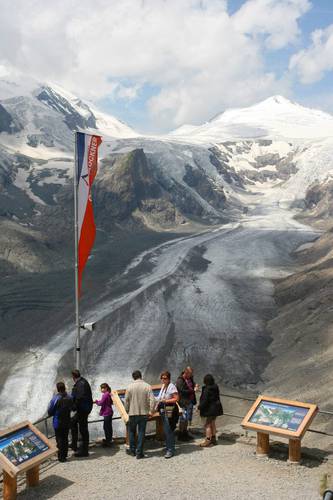 hundreds or even thousands of lovers of alpine adrenaline. As I already mentioned, begins, or ends, here she road on which we go then.

After passing through the village will soon welcome us toll gate, where for a fee € 32 per car or 22 euros for motorcycle / electric car, obtain permission to enter a brief tourist leaflets, even in Czech translation. Maybe someone will argue that the price is still a bit high, but I am saying that this investment definitely pays off, as you will see in our illustrative images, with your own experience is truly unique. From the toll gate you then waiting nearly 50 km road with dozens of switchbacks, views and places to stop and short walk, for example, to one of the waterfalls. A separate chapter is then stop at the famous lookout Kaiser Franz Josefs Höhe, except that of the majestic Mount Grossglockner we can admire one of the fastest disappearing Alpine glaciers - Pasterzenkees.

View point from where we have a whole scene at hand, is located at a height of "only" 2369 meters. Why only? Because we will go even higher and conquer a mountain pass in the grip of jagged rocks, the highest point of this road extends to the magical border of 2 500 meters! But up in the next part...