en.infoglobe.cz » Austria: Alpentrip XI. - To The Roof Of Europe By Car II.

In the last part we finish our journey at the viewpoint of Franz Joseph, about that is also necessary to mention some interesting information. First, however, we have to say something about the very high mountain road, today joins two prominent Austrian villages – Carinthia´s Heiligen blut and Salzburg´s Zell am See. Even more than 70 years ago, this now popular ski resorts were connected by not easily surmountable footpath, the first proposals for the construction of a full road fell through in 1924. Father of this idea was the court councilman Franz Wallack. The first construction work began in August 1930, with the opening ceremony, this masterpiece garnered five straight years from the first trench, so the 3. 8. 1935. In 1934 has already been made available to the prospect of Edelweissspitze (2571). In record time came up a unique building and a length of 48 km with an elevation of 1748 meters. Highest pitch, a full 14%, is located at the turn already mentioned the prospect, which is also the highest point of the entire route, which is situated at a height of 2571 m a. s. l.

In good weather it is possible to see up to 37 surrounding peaks whose height exceeds the threshold of 3 thousand meters and also 19 glaciers. The very main road reaches a height of 2,505 m record at the 311-meter tunnel Hochtor. During excavations in the highest parts of roads were found artifacts, from those the most famous bronze statue shows the presence of the Romans already in the 1st century AD. From historical sources, however, that the

Romans in these parts, especially the vision of attracting gold deposits than they would Hohe Tauern mountains near the highest selected as the most feasible trade route to the rich Salzkammergut.

The average snow depth reaches 5 meters here. More than 250 days a year it rains or snows here and there is nothing exceptional in the middle of the summer stuck in a blizzard or less not pleasant torrential downpour which of the already rugged piece of land does complete Mordor! (Dark, mountain and extremely depressing landscape of the mythological world of Lord of the Rings, ed. Author)

The road is open from start of May to early November, and its passage is charged from 22 to 32 Euros. It is also necessary to monitor the current conditions of passage and the specific opening hours for the season respectively months, which can be partly changed several times during the season.

Now back to the viewpoint of Emperor Franz Joseph, which is the first one of the possible turns of the main road. Parking and terraces FJ-Hohe all summer are bursting with tourists who are overwhelmingly drove their metal darlings. On the way we often pass even those athletes who have decided to hundreds even one thousand meters climb literally own, whether on foot or by bike. And there aren´t definitely a just a few!

At the end of dead end road Gletcherstrasse for all travellers wait exceedingly impressive scenery formed by majestic mountain Grossglockner, below that lies the largest glacier of the Eastern Alps. To the glacier of Pasterze leads from Joseph's prospects also a short funicular, so nothing prevents glacier adventure that can be undertaken under the guidance of an experienced guide.

At the first sight of the terraces you will come across the glacier panorama literally at your fingertips. Compared with the highest peak 1500 meters and its steep eastern wall of the perspective of the whole scenery seems extremely distorted up to the moment when you see tiny dots moving somewhere far below you. Yes, they are same adventurers who went to the ONU glacier excursion. Immensity of the scene will then come literally monumental.

Unfortunately, during our visit to the top of that mountain was hidden by the clouds and was not willing to peep even after purchasing a large quantity of very overpriced bottles of local spirits, festooned with ornaments in the form of strange hairy creatures, whose m

odel was originally probably weighted population and the main mascot of the local coasts - Mountain marmot...

The building itself at the emperor's prospects, situated at an altitude of 2369 meters, also offers an extensive gift shop, restaurants and non stylish high density multilevel parking and a museum with an exhibition devoted to the highest Austrian mountain-climbing, ecology and Pasterze glacier, which is unfortunately considerably from year to year shrinking. 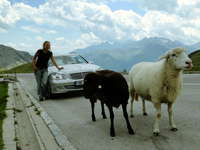 ntain range, around lakes, waterfalls and cascades to the places where in addition to stone, snow fields and inhospitable landscape is nothing. And right this nothing is fascinating. Even in these inhospitable lands live animal as he should be careful every visitor and especially the motorist. That dreaded "predator" is not a polar bear, silly Dutchman altitude sickness or mountain dreaded flea, but peacefully-looking lamb. It is this cute creature, soft hero nursery tale, with short breaks during your turn into hungry "alligator rock" that He enjoys any part of your inventory that we have to go give up, if you want to buy out from his favour and successfully complete our journey . Unwary traveller, seeing the sad eyes of the hungry animal often stops, which proves fatal for him and I can ´t imagine what would happen if he did not hand over something to eat. Sheep act instinctively a

nd immediately. The wolf pack tactics surround your car and bloodthirsty beast eyes make clear its sinister intent. This is what happened to us, and the entire event culminated my grotesque short run for the slope with donut in hand, followed by a small herd of feral sheep. Just to leave the landing and successfully continue the journey.

The trail descends from the tunnel again. You can see more greenery, serpentines make you dizzy and brakes suffer. Otherwise enjoyable consumption of about 6 litres of diesel during the first - stage riser somewhere to climb to the level of 10 litres, to then descend again during 20 kilometres fell into tolerable limits your expected budget.

If you have read this text this far, you should know that our vacation and with it also the series of Alpentrip is nearly but surely over. Next week we meet here last time. We arrive home and assess the pros and cons of this journey that takes our portal accompanied for three months...