Graz (the word is of Slavic origin), is the second biggest Austrian city, whic 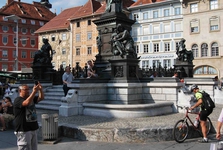 h lies near the border with Slovenia's and its Maribor city, located less than 70 kilometres. Capital of Vienna lies about 200 km to the north. Approximately one-sixth of the total population of Graz are students who are studying in its six universities.

After arriving to Graz you will be amazed of its refinement, purity and beautiful historic architecture, which is located on the border of cultural influences in Central Europe, Italy and the Balkans. Therefore no wander when in 1999 the city was declared a UNESCO World Cultural Heritage Site and in 2003 became the European Capital of Culture. 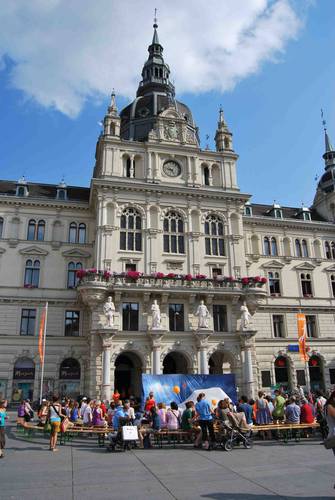 To explore the historical centre, it is enough when you decide to walk, but you can also use an extensive network of public transport that is particularly well-secured in the centre by tram. Graz is among other things a city that gives plenty of space to bicycle traffic. Wherever you go, you'll see bicycle lanes, so if you like riding a bicycle, Graz is right place for you. 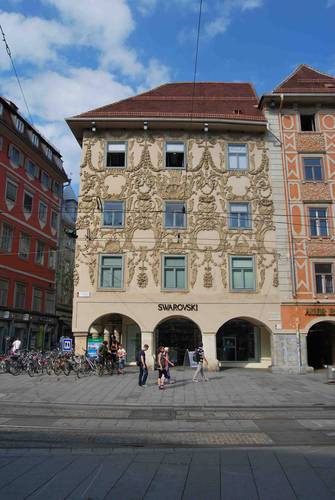 While walking through the historical centre don’t forget to visit the main square with dominated beautiful Town Hall. The former Town Hall, which soon proved to be too small, used to stand in the Jewish district. In 1550 was built a new, in the Renaissance style with a very austere exterior, which was only on the corners of buildings beautified ornaments. City Hall also served as a police station and prison. The building that can be seen today, it was built between 1805 - 1807 on the ruins of the old, which was taken down. The current city hall building is designed in a neoclassical style. 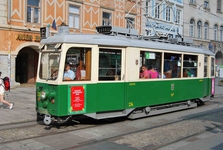 Adjacent main square (Hauptplatz) is the true heart of the city. Its centre consists of a fountain of Archduke John, whose core is formed Archdukes statue larger than life. Around it are the other statues represent four rivers - Mur, Sava, Drava and Enns.

The edges of the square are lined with many important buildings. House Luegga include there. It was built during the 15th and 16 century. Its baroque style is enhanced with beautiful stucco.

Another important building in the square is the Palace Stürkh, which originally belonged to the same merchant family and was gradually assembled over th 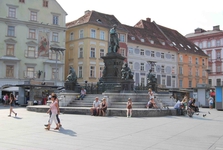 e centuries, from the Middle Ages to the 20th century. In a small arc between the windows, note the statue of the Virgin Mary.

Christoph's townhouse was built in the 17th century. It was named by the fresco of St. Christopher, which decorates the front gable.

Another interesting house, which can be found on the corner of the square is the building in which nearly five hundred years house Adler Apotheke pharmacy. The current form of the building dates from the 17th century.