According to tourist guide, the Cathedral, situated in Vienna city centre, is visited each year by at

least of three millions of tourists. Stephansdom - St. Stephan´s Dome - is placed in the centre of historical nucleus, so, it is natural that most of tourist sightseeing tours starts and terminates at this place. The introductory part of the church could be free entered, whereas back section of its main navy is fenced with grates, so that the tourists could not disturb the believers sitting on the banks. Anyway, the entranc

e could be limited on festive occasions, as the church is often a place of extraordinary events, participated with the representants of State, and sometimes also during important concerts. Nevertheless, the entrance to the church is limited from rather simple reason: it is big number of visitors, trying to penetrate in. Inside the church, at the grates, dividing the space for tourists from divine service section, there are available the monitors with tourist information in several languages. It is not necessary to pay a fee but you can give back a contributon, according to your consideration. Anyway, most detailed information about the history and interesting details of the church could be obtained from the guide, for a charge of couple of EUR, of course. Or, you can buy a guide in book-form in various languages, just inside the book-shop (similar book-shop is to be found inside the tower). 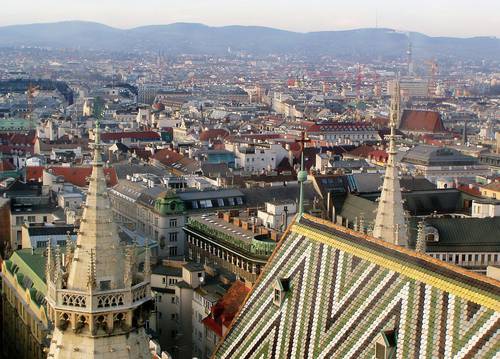 St. Stephen Dome is a testimony of construction styles evolution, from Romanesque ones (the oldest parts were preserved especially in the introductory west part, close to the square), via Gothic style (main navy and the highest south tower) up to Renaissance style (lower north

tower) and Baroque style (the interior). Original St. Stephen Church in Romanesque style was consecrated in 1147. Since 15th century, the church was declared as a seat of Vienna Bishop. The construction was one of the highest buildings of the old continent. This fact symbolized one from most powerful monarchies, but, on the other hand, some fatal consequences of war conflicts did not evaded the church, at the end of the 2nd World War, for the last time. Nevertheless, it is an interesting fact that original handicraft workshop is working there,

consisted from representants of rare handicrafts. This section is continuously looking after maintenance and reconstruction of such unique monument and jewels, hidden there. Anyway, these are not only medioeval handicrafts, but even lift-maintenance worker belongs to them. The elevator (lift) makes an important service for tourists. They can be carried out just towards the bell, placed in lower north tower.

Adrenalin climbing to the tower top

Inside the Cathedral, you can descend into underground. Here, you can see body-rests of many Church, Emperors´ as well as noble personalities from the past. On the other hand, we were allured with heights and the outlook of the town from birds´ view. Nevertheless, the North Tower (Nordturm), was not a target of many to

urists (during our autumn visit there), despite the fact that, except the lift, only 75 stages led there. Maybe, the inverse weather was the reason which kept a smell at the earth (coming from long queue of cabs) situated just along this part of the church. Anyway, South Tower could be originally higher, but the construction remained unfinished from Middle Age time period. Inside the tower, main cathedral bell is to be foound, and from there, an outlook to

wards typical patterned roof could be enjoyed. On the other hand, much more bigger interest was for the sightseeing of South Tower (Sudturm), known also as „Steffl“. You enter there from low watch-house, marked as: „Aufstieg zur Turmestube“ (Ascent Towards Tower-room), added to church-navy. At present, the space serves as ticket-office (the fee makes EUR 3,50, the children up to 15 years of age pay EUR 1, and groups of students pay EUR 2). However, no lift is available there, you

have to mount 343 stages along rather narrow spiral stone staircase. During the ascent, you are forced to have a stop (not only owing to your respiration) but, especially owing to a fact that some visitors could descend down. The only more spacious rest place is situated close before mounting in a room where so called Pummerin Bell was placed in past (till damage of the church during bomb attacks in April 1945). This bell was manufactured in 1711 from rests of Turkish guns, confiscated after successfull town´s defence. At present, you can find there small collection (lapidarium) of original stone tower details as well as information table, regarding consecration of eleven smaller bells, placed inside this tower. 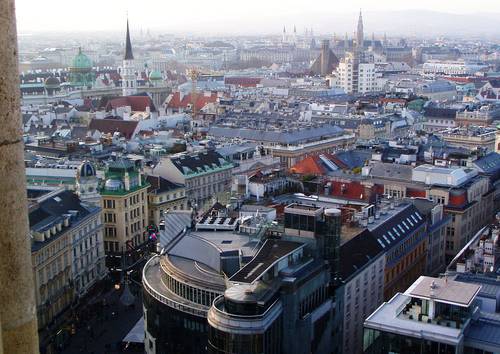 The bells look after regular ringing, which belongs to every-day shade of this big city. However, a small disappointment could wait for some of non-informed tourist at the end of this route. The tower ascent terminates in so called watch-room (Turmerstube), where lived a watchman, informing about fire danger or possible enemy attacks. This room is situated in the middle  of the tower (in the height of 67 metres, from total height of 136,7 metres). The outlook of the town and its environs is enabled by means of four rather small windows, orientated towards all four world parts. Inside, there is placed even small souvenir shop. The best opportunity for good business and profit comes during a moment when crowd of persons is gathered at the windows, and the tourists, waiting for such special outlook, find some free space just at sale counter. Nevertheless, the outlook is worth to be enjoyed. You understand fully, why the other persons let you to wait for longer moments, and could not step back the window. It is true that the town looks like from bird´s view in another way, even the dominants are diverse. All, what seems to be magic from the pavement, with its height and majesty, changes fully the view from upper position. You can make some comparison from added enclosed photos.

Published: 12.4.2020
Approximately 30 kilometers south of Vienna, in the province of Lower Austria extends spa town of Baden (unofficially Baden bei Wien), which was at the time of the monarchy popular place in Austria's elite and now offers a unique atmosphere full of elegance and grandeur.