Published: 19.3.2008
Baikal Lake is situated in southern part of Eastern Siberia in Russia. It is deep, dark blue lake, by Russian people named as "Holy Sea". The lake has some magic power of attaraction, beyond all description. The name of a lake means a "sea" in a language of original inhabitants of area - Buriats.

Lake Baikal is 1648 m deep and contains one fifth of volumen of sweet water on the earth, so 23000 cubic kilometres. Its form reminds halfmoon, stretching  in length of 635 kms - from town of Irkutsk on south up to Nizneangarsk in its northern part. Lake-circumference makes nearly 2000 kms. Its width reaches nearly 50 kms in average. The lake is placed on famous Trans-Sibirian Line which has its stop just in Irkutsk.

Baikal is placed in deep trench cavity in so called rift-zone. This would be a test for splitting of Asia-continent. According to geophysical research, there are situated - under water mass in various parts of basin - sedimented layers of even 6000 m thickness. As a beginning of Baikal trench and its fulfillment with water is, according to scientists, taken end of Tertiary formation (paleocene and early neocene) - i.e. lake-age  is 25 millions approx. Anyway, its tectonic movements continue also in present time, so many earthquakes in area prove this fact. These appearances are accompanied by visible falls of bank-parts and lake-bottoms. Baikal lake is placed on three independent hollows, joined each other in the course of millions of years. The lake was made to today´s form  before 2 millions years approx. The deepest is the middle part, from confluence of Selenga river to Golden Nose peninsula.

The data regarding the deepest place are not unique and  there are diferences in Russian technical literature sources, as a valid infcormation is taken those stating the deepest point of lake relating to 1648 m. This cavity was closed in past  by a range in southern part stretching from Holy Nose over greatest Baikal island - Olchon (730 square kilomentres). The range got  declined later, the greatest peaks and waters of two ancient lakes reminded and joined into Baikal. More than 336 rivers flow into Baikal lake, but only one river runs out. It is river of Angara which flows to the south  in length of 1779 kilometres and  mouths into river of Yenisei. This river  has great hydroelectrical potential. It is to be found here a cascade of four dams (Irkutsk, Bratsk, Ust-Ilimsk and Bogucansk) with water power stations. On lake there are 27 islands, 22 of them are stable a 5 lakes are inundated periodically. The greatest are those of Olchon (730 kms²) and Great Uskanij ( 9,4 kms²).

In past, this enormous lake was used as a source of drinking water, taken by people of 40 small towns and villages, situated along both banks. However, the water is polluted with chemical industrial  litters and waste at present. In spite of this fact, the water can be taken as clear. In spring days in May, when the first ice is disappearing, you can easily see 40 metres under water level! To most important towns belong those of Sljudjanka, Baikalsk and Babuskin, further you find here the ports of Baikal, Tanchoi, Vydrino, Ust-Barguzin, Nizneangarsk and other. Most of them are situated along southern and southeastern bank. On bank, you find also tourist chalets. In an area, teher are developped mining and paper industry, ship-construction, fishing and fish-working.

Baikal lake has an influence for hard continental Sibirian climate, anyway, it is expressively softened with its watermass. At the beginning of October, the surrounding mountains are covered with snow but water surface freezes over during Januray. The ice-thickness is moving from 70 up to 120 cm. This fact enables crossing of lake surface even with heavy trucks. On places where the motionless water froze, the ice is transparent as a glass. So, it is possible to see and observe swimming fish. However, this appearance is unique, as bitter cold and stretching of ice-mass creates crooked mosaic of  broken icebergs. Cracking ice terrifies any person as you hear the sounds as gun reports. Last ice-rests thaw at the end of June, in August the water has 15-20 degrees of temperature. However, only one windy day is sufficient for cooling down of water temperature of 10 degrees.

Baikal climate can be treacherous in any year season, as isolated atmospheric circulations pass through high over huge water level, bringing sharp gusts of wind and weather inconstancy. The frightened appearance is Sarma, coming in winter, reaching the speed and power of hurricane. Further quite apprehended phenomenon – these are the winds, regularly lashing the shores and islands of Baikal depression. Such winds have its names – southern kutluk, verchovik and berguzin.

Life conditions are cruel, anyway, for Buriats. Mongolian nation, living in this area, the lake was all the time the seat of  God.  Its main God, Burchan, lives, according to the legend, on Olchon island, famous especially thanks to its Shaman Rocks.

Baikal has enormous importance as far as zoology area is concerned. They are living there more than 1000 rare (endemic) sorts. Vegetable as well as animal world is very rich. From water level down to deepest places are inhabited with more than 600 sorts of plants, and thre quarters of them are to be found  in this area only. As to plants - there are many sorts of sea-weeds (approx. 300 sorts). A special sort is formed with Baikal fungi, many worms, mollusca and crustaceans. These crustaceans are an important ingredient of food for fish. In lake there are staying 50 fish-sorts of seven species. A group of obstinates fish is most numerous (25 sorts). Anyway, main industrial importance have salmon-like fish species (omul) representing     two-thirds of total year fishing out.

Most important representant of water fauna is sturgeon fish - reaching the length of 180 cm and weight of 100-120 kgs. From fish being not fished out for industrial purposes, it is holmenka, endemic fish species, and golomianka, transparent thorn-fin fish, 15-18 cm length, with small, clear pale pink body, effecting an impression of lightening. Golomianka fish serves as a main food for Baikal seals – Nerpa. 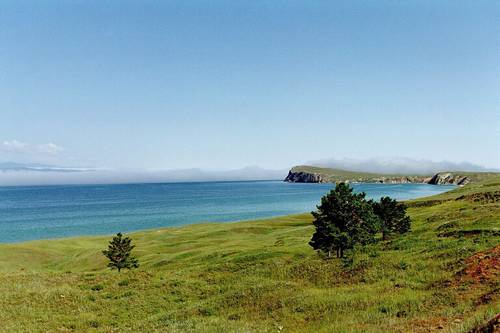 Lake Baikal was written on a Survey of World Heritage UNESCO in 1996. Provided you would be interested to visit this marvellous area, we recommend you to study the offers of outdoor travel agencies. They offer fortnight walkings of Baikal beauties for a price CZK 35000-40000 per person.