Strážnice landing place is to be found quite easily. It is situated close to skansen, in the direct neighbourhood of local castle building. Even popular cyclimg route is passing there, as at the information centre (and ticket office) a group of cyclists of various stage of age is having a rest. Sightseeing ship „Amos“ has the capacity of 30 persons, and it does not feel too trustworthy in narrow river-bed. Nevertheless, the ship is leaving its anchorage-ground without problems and plunges into deep waters of narrow tunnel, overgrown with bushes and trees along both banks. A woman-guide, bearing her sailor´s cap, is very pleasant, that, in past, the banks of original canal were completely plain, owing to horses, towing the boats along. At present, all actual green covering is original (fifty years work) of nature, and this fact is confirmed with variegated composition of woods and bushes. The navigation is passing slowly, comparable with a speed of holiday cyclist. The water in canal is not moving a lot, and a ship can whirl up water level. 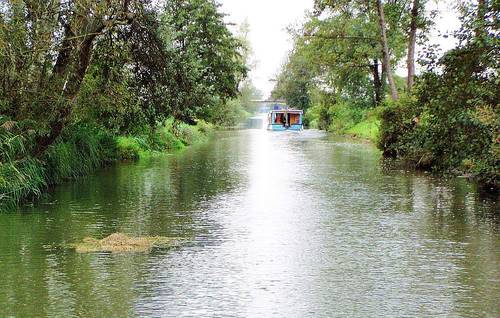 As an introduction - several information of technical character

Total length of Baťa canal makes over 50 kilometres. In fact, the canal is consisted of several mutually non-connected sections. From theoretical point of view, the route could be navigable just from Kroměříž up to Hodonín, provided is would be succeded to finish or set in operation again several technical equipments. A part of Baťa canal is leading through original river bed of Morava-river, on some places, the artificial canals, or arranged irrigation canals were constructed. Its depth makes only150 cm, so the navigation of ships with a draught over 80 cm is not recommended. The width of a canal is moving around 12 metres (shipping corridors were originally projected for a width of one ship - i.e. 5 metres). The bridges, foot-bridges, weirs, including some technical specialities, such as folding bridges, belong really to construction monuments.

Leaving Strážnice, the copse along both banks is missing. Anyway, the view is not changing a lot, as relatively high banks prevent better circular view of the countryside. Moreover, we are sitting in our benches against each other so that we can see better the faces of another passengers and cannot follow the scenes along river banks. We cannot even oppose as low cloth (installed there instead of a roof against bad weather) prevents us better view around. For the next time, we prefer obviously an independent boat or ship with open roof.

On several places along the bank, the traces made by beavers or another rodents are to be

found, on some another places, the banks are washed away (so, the ships would not drive there too fast). The guide describes numerous quantity of animals as well as plant sorts in the meantime. To tell the truth, I miss the orientation, if she is speaking about birds, flowers or insects.Finally, a change is coming: we arrive to Petrov barrage. Several boats and houseboats are mooring in front of the sluice. Most of them are not expecting free passage but their crew made a relax-time on the bank. Some of watermen  take their refreshment at kiosk, waving passing ships, the other prefer a walk to near village. This community is well-known with its unique complex of preserved wine cellars in quarter of Plže.

The efforts for embankment of Morava-river start from Middle Ages. This fact is documented with messages and notices regarding construction of anti-inundation piers, draining of marshes, digging through of meandres, with a target to level the river-flow. Just during 19th century, goods transport (wood, coal, tobacco) on boats was in operation on low flow section of Morava-river, on boats from Hodonín to confluence with Danube-river at Děvín Castle ruin. On return way, semi-empty boats were drawn by horses from the bank. Such short experience inspired obviously the founders of Baťa, well-known family company, to an idea that lignite (brown coal of the second quality) from Ratíškovice mines could be transported to their factories in Zlín and this would be much cheaper as traditionally by railway. So, the project of inland water way, known as „Baťa Canal Way“ was estabished.

importance (against-inundation, irrigation, etc.). Its construction was started in 1934, financed partially by Bata Company, partially by means of state share (contribution) for unemployment decrease, when economical crise decreased. Shortly before the beginning of the 2nd World War, the first boats of exactly stated parametres, regarding length, width and draught, appeared in Moravia Canal, in order to correspond smooth navigation on all sections of this water way, including barrages. Each boat could contain a load of 15 railway carriages.

However, this project remained unfinished, and when the War was over, no continuation followed, despite the fact that the reflections, regarding construction of water connection Danube - Moravia - Odra are still actuel. However, some non-maintained sections were consequently stuffed up with mud and were overgrown. So, these unique technical equipments ceased to exist, and were out of opeartion. Later, with coming changes of social relations at the end of the century, some enthusiastic persons presented an idea regarding canal-renovation for tourist water way. It was their merit that new chapter started to be written in a history of such remarkable work.

Traffic light is green, so our captain obtained an approval to enter the navigation corridor. Behind us, the gate is closed and we start to drop to the dept of three metres approx. After 30 minutes, the second gate is opening in front of us, and so, our water wandering continues ahead. The next  landing port, at one of most remarkable technical monuments, is appearing in front of us. This pouring site at the community of Sudoměřice would serve for coal re-loading from railway carriages into boats. So, very ingenious equipment lifted a carriage, so that its contents would be poured out with its open frontal part into a boat.

Despite a fact that the rails from near railway line are missing, the parts of original equipment wer

e preserved till now. At present, this non-overlooked building on the embankment serves not only as a technical monument, but also as an interesting look out tower on arranged roof. Not far from this pouring site, we enter the intarnational waters. We can follow, along banks of the canal, red-white frontier stones „C“ and „S“ on opposite bank. However, falling out of Bata Canal back to Morava-river, at small town of Rohatec, is not finished, so, our navigation will finish in recently built, freshly new landing port, close to the town of Skalica. Anyway, you can see immediately, that main tourist season is over (since May to October), so that our ship is returning empty. Deserted port will be rather busy when arrives wedding couple, in order to take the photos there, inside such extremely pleasant nature millieu.