Published: 2.8.2013
Cochabamba is the capital of the Cochabamba Department that cover the area approximately of Slovakia. This department is well-known in the country for its fertile soil thus its nickname is “granary of Bolivia”. Among agriculture products cultivated there are grains, tobacco, sugar cane, potatoes or cocoa beans.

Thanks to its fertile soil the region has been settled for thousands of years by various native tribe/civilization Incas including. There are several nature parks in this region such as Currasco (area approx. 6 thousand km²), Tunari (3 thousand km²) or the largest Isoboro Sécure (13,7 thousand km²). 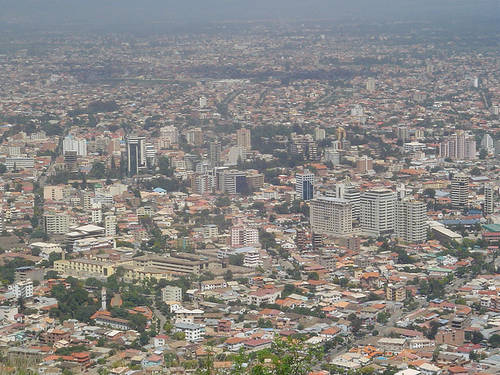 Cochabamba’s name consists of two words meaning “lake” and “plain”. When the Spaniards conquered Latin American and started mining silver in Potosí, Cochabamba prospered as well. In the 18th century, when mining declined the city declined with it. 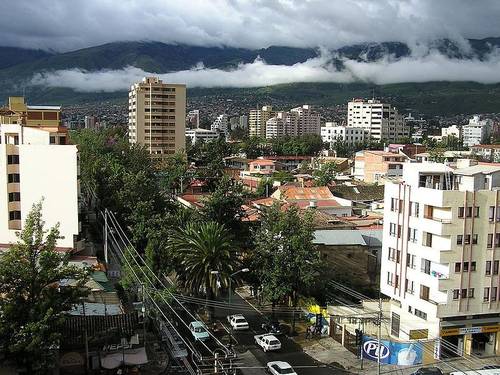 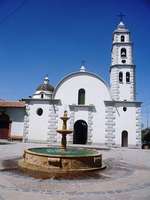 today it is among the most progressive Bolivian cities. Its districts for example around Plaza Colón represent modernity in the city for there are modern buildings and companies have their residences there.

Good reputation of the city harms the fact that it is known as the hub for cocaine cartels. Allegedly, cocaine cartels’ bosses are the forces standing behind a real estate boom in the city. Also, when you are in the city you should beware walking on streets in the night for gangs often rob people. The best is to move on streets where are crowds.

You may visit many museums; see historic landmarks and other tourist attractions. Among museums there are Museum of Medicine, Archeological 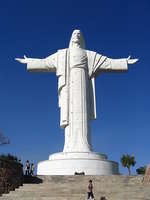 Museum or the Museum of Natural History.

Cristo de la Concordia – perhaps you know the statue of Christ in Rio de Janeiro. Christ in Cochabamba is bit larger than the one in Brazil and until the year 2010 it was the largest statue of its kind in the world. Then the Polish Christ surpassed it

Plaza 14 de septiembre – is considered the center of Cochabamba and it is designed to suit needs of tourists and pedestrians. There are small places where friends meet, or celebrations are held as well as performances of local street artists.

Parque acuático – it is a theme park focusing on ecology and water sports in particular. It is popular mostly among kids for its fun rides.

Published: 19.9.2016
We leave sunny Copacabana and travel through La Paz to Coroico, a small village we deliberately chose to spend several days in nature. There goes direct line of public transportation (collective) from La Paz. It takes about three hours and ca. 150 Czech Koruna. We need to go from the altitude of 3600 meters (La Paz) even one kilometer higher. Then we would go donw serpentines to Yungas region (a region between the Andes and lowland forests). In this region there is the “death road”, a Bolivian attraction. Since 2006, there has been opened an asphalt road. Therefore the muddy road which used to be “world’s most dangerous road”. Every year allegedly 300 people died there. Today, only bikers use it.

Published: 26.9.2016
La Paz interested me the most of all places in Bolivia. I have always considered its unusual altitude interesting. I have always thought about how people live at 3600 meters of altitude. After I have spent some time at these altitudes in Ecuador or Peru, I have found out it is not hard at all. One gets simply used to it. Still, La Paz is quite a phenomena among large world cities for how high it is located. The city looks like it lays in a crater. Brick houses are built on slopes. It seems organized. Once you get closer, it is chaos of streets and houses-in-progress. There are high-rise buildings among historical structures down in downtown. It is quite an interesting mix. People travel by cable cars which simulate rapid-train system or subway. It is the fastest way how to get form one edge of the city to another.

Published: 3.10.2016
The fastest and easiest way to get to Torotoro village from La Paz is by night bus from Cochabamba. There you transfer to colectivo (local form of public transportation. We wonder through the terminus in Cochabamba at 5:45. A lady at the information stall is even more sleepy than we are. Yawning she told us that we have to go to another terminus. The only buses depart at 6 a.m. Therefore, we need to hurry. A cab driver makes use of it. Therefore, we take a two minute ride with him to the adjacent district. It is dark there. We get off at a garage. He says to a group of people idling at a van that he brings two foreigners. For this he receives 15 BOB (55 Czech Koruna) and put a smile on his face.