You can use mass transit system and visit Blagaj right from Mostar. There is Turkish spa, mosques, Islamic school, four stone bridges, and a cloister. Moreover, there is Stari Grad (a medieval castle), Careva Dzamija (royal mosque), the Kardjoz-bega bridge. The latter and the former were both built in the 16th century. Blagaj was heavily bombarded during the WWII. The town was renovated in the 1960s. We leave our car on paid car park (2 euros) and set off to what is the main attraction here. It is a cloister built by the Islamic order of the dervishes (tekija) in 1520. The Buno river spirngs right beneath it (Vrelo Bune). 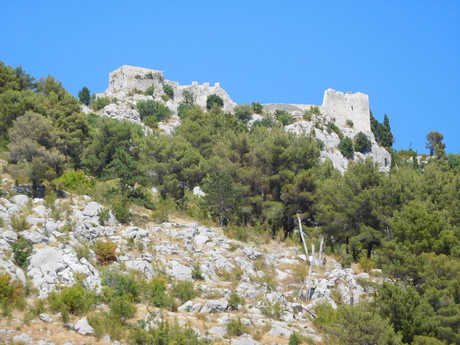 We pass many souvenir stands on our short walk. There are being sold many different kinds of honey, syrups, garden flowers, dried herbs and classic souvenirs for tourists - postcards or hand-made fashion jewellery. The road folows the Bruna river. Should the cloister not interest you, you need to cross the bridge to the other riverbank first. This gets you to outlook (not charged) where you would see the spring. However, we are headed towards the cloister. The entrance fee is 2 euros. It also allow us to walk in the compound around the cloister itself. 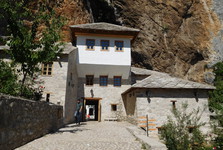 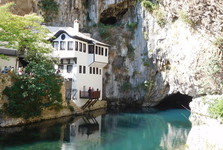 The Dervish cloister looks different than its 16th century predecessor. It was rebuilt in the year 1851. Visitors are asked to cover themselves just like Muslims and take off their shoes before stepping inside. Only then are they let in. Cloister's room are

traditional. Ceilings are made of wood, floor is covered with colorful carpets. There are also social rooms, bathrooms, prayer rooms and so on. A classic tourist may find the interior quite simple. Apart from Quarans on display and colorful carpets there is not much to look at. However, Muslims do not agree. It is apparent that this place is very important for them. The vista from the first floor over the Buna spring is beautiful. In front of the cloister (almost right in front of the balcony) there is a staircase going down below the river stream. Here may visitors even get a taste of Buna's water. The dervish cloister is a combination Ottoman and medieval architectonic features. It is considered a national landmark. 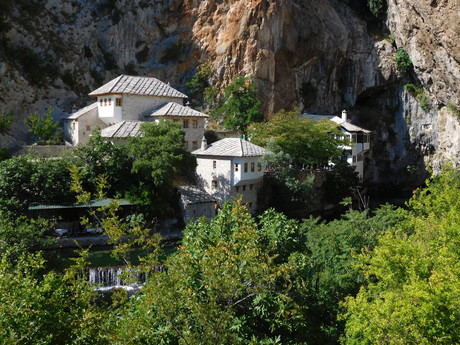 We leave the dervish cloister compound. By crossing a bridge over the Buna we get to the other riverbank. Stone trail gets us on a rocky projection offering a vista which is perfect for panoramatic shots. Eventually we reach the most popular place here. It is the karst spring of the Bruna river. After 19 kilometers it springs to the surface from under huge lime rocks. There is a 100 meter high upright rock wall. The speed of Bruna's stream is 43 cubic meters per second. The water temperature is mere 10 °C. Is turqouise water is very tempting to take a swim in summer heat. The bruna flows another 9 kilometers away from the rock before it flows into the Neretva. 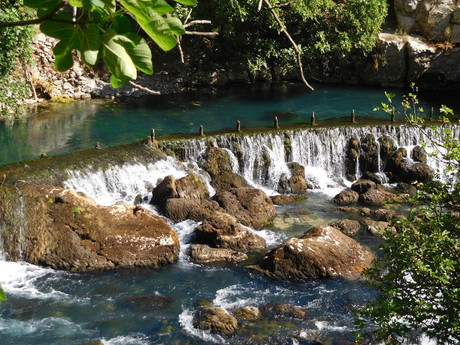 Visitors can also pay for a raft ride down to the cave where the Buna springs out. However, it is only a short visit. The guide uses the hanging rope to move to the cave entrance and after a while he gets the raft out. Much better experience is to sit at some of the local cafes and restaurants and enjoy the view from there. These are situated along Buna's stream. 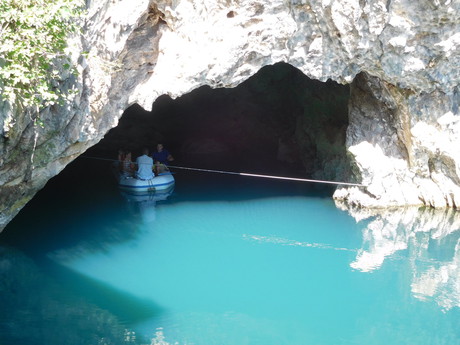