en.infoglobe.cz » Bosnia And Herzegovina: Mostar Mysterious Rises From The Ashes As The Phoenix

It is located in Bosnia and Herzegovina and the centre of the river Neretva. From each side, surrounded by high hills, and it is their merit that one can experience what it must be in hell. In summer there is devilishly hot. Rocky hills prevents against the wind and also from them roll into the valley waves of heat. The local people are used to and instead looked exhausted and endows you a bright smile or try to speak with you.

As far as the river Neretva, it enchanted me perfectly colour, which is something between azure and emerald green colour. He could only look at it, to realize the incredible purity. Any plastic bottle or pollution caused by humans. Just beautiful colour of the river banks and maintained. The man has the feeling that it is located in a protected natural park and not in the middle of the city. 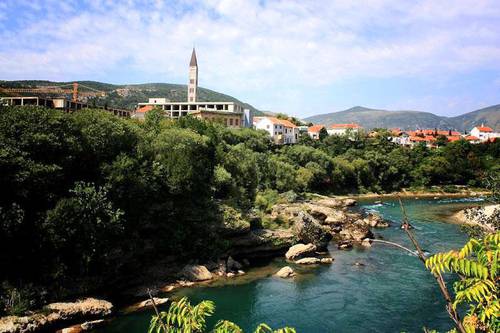 Mostar was founded in 1522 under the Ottoman Empire. The current name came about 44 years

later, when the Turkish builder Hajrudin built to command the current symbol of the sultan of this city. Beautiful bridge is connecting the two banks of the river Neretva symbolized the connection between the Christian and Muslim world. Maybe that's why it meaningless in the civil war in 1993, destroyed by artillery fire. Under attack by Bosnian Croats were in the desire to erase traces of Turkish domination. War not only marked the bridge, but the whole country. During his journey is hard to defend against sad emotions at the sight of ruined houses.

Even in Mostar glimpse at each corner of dilapidated buildings. Some have managed to put together, but for some of them are still not finance, so they are waiting for their turn. If ever will. One can only with difficulty present, looking at the ruins of what it had to be there in the middle of the front line. Evidenced by the cemetery built in the city centre where data of death on monuments are the same as the term of civil war.

In 2004 the old bridge with the help of Turkish and foreign support builders reconstructed, so the city has again a symbol. Today, after it passes the number of tourists who come especially for him. It is typical for his next, very frequent attraction - the jumpers. Young men at the top of the bridge rustling collect cash, and when collected enough money, or it's been bored, just jump through few meters nothingness into the river. Man is only during the consultation over the railing dizzy, let alone still had the taste to jump down.

The bridge re-unites two worlds - Christian and Muslim. On our question, how based on many

years, we responded with an indulgent smile - if not, on the other hand, do not go. However for foreigners concern is unnecessary. Muslim traders like to welcome tourists. Do not just mean profit for them. And the river bank around adorable covered market. There you will find all sorts of fictions of the world, mainly tourist souvenirs typical of orient. Mostar has always been a proud self-made copper products. A few years ago, when someone walked in this market, it could almost every second shop, he heard a soft klepot, resulting from under the hands of artisans who are directly in the workshop behind the shop created a curious new sight and new artwork. Whether fancy jewelry or copper picture. The borough also found numerous cafés and restaurants that are cheaper than here or in Croatia, so entice many a visitor, who refreshments in air-conditioned café in the middle definitely comes in handy steam.

The town has several mosques during the war also damaged. The largest of these is the mosque of Pasha Kosko Mehmed. It dates from the 17th century and contributed to the restoration of the Turkish government. It stands on the banks of the Neretva River and includes a small but well-kept yard. On it is found fountain, people used to wash before entering the mosque, where impure person must not enter. Unbelievers can go inside the mosque - for a fee of course. In today's world, it also deals with faith. If you come to the end of Justice, you'll be able to see a beautiful view of Old Bridge. This picture postcard of decorated and certainly would be a shame to let it go.

Surely visit the gallery from the time of war. It is located just behind the bridge on the right side in the Muslim part of city. Inside you will find lots of photo, detail depicting the tragedy of the city, even there projected a video of the attack on the bridge and its demolition. It is a little chilly, but definitely interesting. And why did he miss? Because you will have the unique opportunity to see what was fixed in last few years. Mostar was one of the most war-torn cities of Bosnia and Herzegovina. I still catch sight of a number of tracks that could not be deleted. After all, when walking around town almost everywhere you will see reconstruction of buildings. Because Mostar slowly but surely rising from the ashes to become again what it was before the war, one of the most important cities in the Balkans. 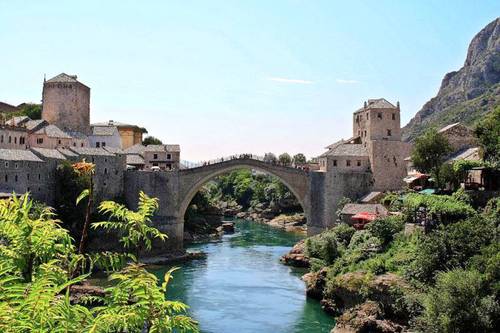