Published: 20.10.2010
In our days, there was a proverb that the same number of people and bears are living in one square kilometer. Yes, you are right, it is not true at present. There are existing such places, of course, where more grizzlies could be met as their admirers. And just Khutzeymateen Reservation, not far from the town of Prince Ruppert, placed close to Alaska border, belongs to such localities.

A glimpse at the map confirms that the entry to the reservation would not be too easy. It is true:at first, the bears´ lovers have to be embarked on board of hydroplane, and be transferred, above peaks of mountains and lake waters, towards a place, known as Palmerville. It is a houseboat of standard dimensions, where (during summer - or since spring, better to say - till a moment when the bears fall asleep) - Greg Palmer with his family is living. It could be an eccentric fellow or heroe, it depends of point of view. And just this man will accompany his guests for unforgettable excursion on boat-steamer around banks of the reservation. Would you believe that you will have a chance to follow grizzly-bears from such short distance that you would not meet him under standard situation.

A Bear is a Sovereign Here!

So,during three hours´ drive, Greg is narrating the stories about his bears´ friends, following them carefully in the reservation. He knows all of them according to their names, is informed about their foods, and even the fact when they suffered from diarrhoea for the last time. He is ready to relate so long that their listeners are following his stories with great interest. When he becomes silent. the attentive hearers will know that something is on. The boat motor starts to be silent, and Greg will dress, including with their crew, non-elegant, but practical rubber suits. The boat is swinging on welles towards the bank. And you can see well-developed bear with wonderful coloured fur. „It is Buddy“, Greg introduces the bear, informing about his age,  character and last injuries, got from the fight with the other bear. Nevertheless, Buddy will idly look at the boat, turns aside with his back, leaving his place to the forest. He is not in a hurry, nor looking round. He knows very well that this area is his dominion. 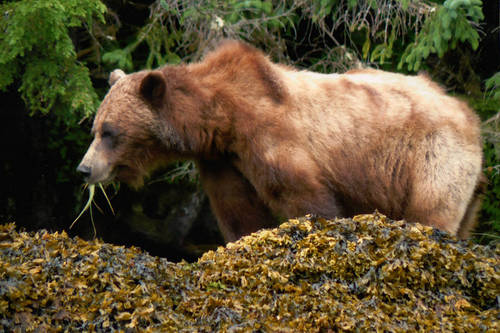 A Breakfast on Stones

Several hundreds meters ahead, we have the chance to follow majestic Jackie, with his small child-bear. Greg is approaching with bravery to a distance smaller than five metres. From the beginning, Jackie seems to be rather nervous, and, to tell the truth, we have similar feelings. But immediately, when she recognizes, which type of  boat arrived, will become tranquillized, let us to enjoy with her figure as well as lovely falls of her descendant. The bears are acquianted of Greg and know that he does not do wrong. The rule is obvious: we will follow these strange figures, ow they are looking for stuck shells below stones and small fish, and they, as a reward, will not be too clamorous, and do not throw away anything which could be dangerous for us. Greg agrees, and any general smacking will be punished by pole poking into ribs of  delinquent. This is bears´ area, and the man is obliged to respect this fact.

During three hours´ navigation with Greg, we could saw six bears and one small child-bear. We were informed about their behaviour, what they are fond of, and how they are disappointed when a man penetrates their kingdom. So, they are united in Khutzeymateen Reservation from this reason. Only Greg is entitled to enter there. And he is also - according to an affirmation of his wife - a big grumbler. 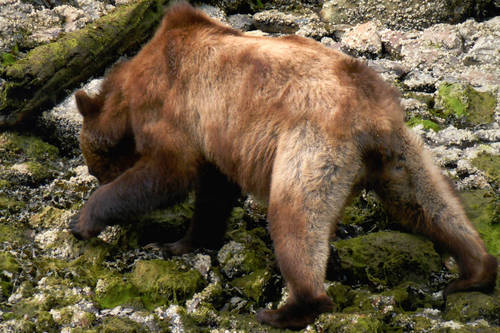 Published: 21.12.2010
Small town of Port Hardy, placed in Vancouver Island, British Colombia, is not beautiful nor interesting town at all But all lovers of nature observation would remember such locality, for sure. It is offering, not only the entrance into Cape Scott Provincial Park, but also as an experience which could not be granted in any other place.

Let´s have a look at Canadian reservation, where the bears live. Video: Zuzana Dastychová