en.infoglobe.cz » Cambodia, Angkor Thom: By Bike Through Jungle At Night

n temple should be mentioned. This old stone temple was built between the 12th and 13th centuries. It was the central temple of the capital Angkor Thom. Therefore, it is situated at the center of the original city. The first thing you notice are many towers - there are around fifty of them. Everyone has huge relief faces on every side. Therefore, over 500 eyes look at you while you are at the temple. Some researchers say these represent Avalokiteśvara. Others say it is Emperor  podle jiných je to tvář panovníka Jayavarman VII who built the temple.

There are numerous bas-.reliefs on bottom galleries. These depict the then life of Khmers - battle scenes where they fought Chams or scenes from daily life such as cockfihgts etc.

Ta Prohm is very popular. It is one of the few temples which has been preserved in the more or less same condition when it was discovered. Its walls are covered by lush vegetation. Movie Tomb Raider drew inspiration from here. No wonder then that it is really overcrowded. However, the atmosphere is tranquil in the evening hours without noise of hundreds of tourists. 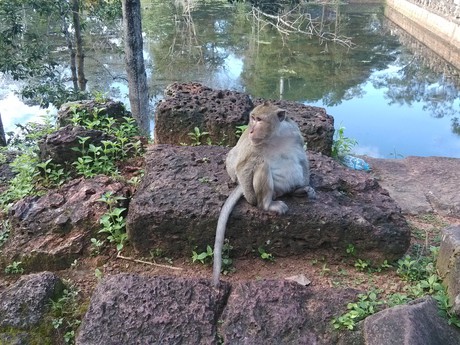 We took bikes to ride through the entire area. Also, we got to Neak Pean, an artificial island with a Buddhist pagoda standing on it. The artificial water surface supposedly represents mythical lake in the Himalayas. Its water is said to have healing effect. The ruler also wanted local water to have healing effects. This place was one of the many "hospitals" he ordered to be build. 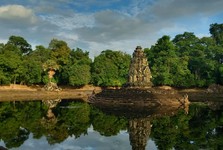 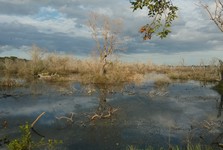 Bikes made us more mobile then if we walked. Therefore, we could travel to remote places. Once we were out of reach of many tourists, we found ourselves among rice fields where buffalo calfs were on pasture. We ate a soup at one crossroads. It was difficult to recognize its ingredients apart from the banana tree blossoms and noodles. Yet the soup was delicious. 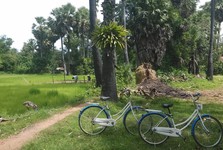 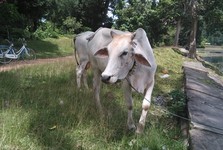 The last day was upon us and we would get up early. With several dozens of kilometers under our feet we returned back to our room for couple of hours. We intended to enjoy the third day.