Angkor Wat is one of many temple built in the former capital Angkor Thom. It's present name comes from the 16th century. It means "city temple". It is situated about six kilometers from Siem Reap town. It was from there we wanted to start our trek to the famous temple. However, we left the best for the last. First, we set off to the other side- Phnom Krom, a smaller temple. There are special bikes in the city costing just couple of crowns per day. Therefore, you are not limited by local public transportation or trying to catch a tuk-tuk. Moreover, by lending the so called white bikes you give some of that money to charity. 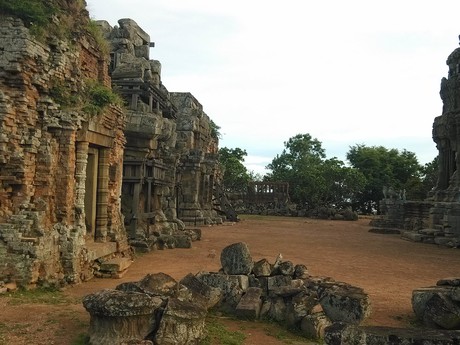 Phnom Krom is situated about twelve kilometers south off Siem Reap. It sits on one of the hills above Tonié Sap lake. The Hindu temple was built at the end of the 9th century. It is devoted to Shiva, Vishnu and Brahma. Not much of it is left today. Yet it is famous for its great location and many tourists come here to observe the sunset above the lake. 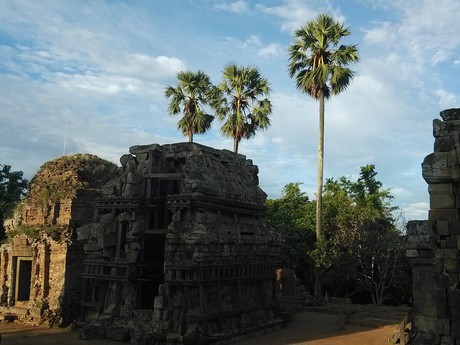 The sunset we also did want to see. Yet on our way already we encountered couple of interesting things. We were riding down along the river and observed children and animals playing at hosues on stakes. Houses either stood in the water or animals slept among their stakes. Also, we sa a small Buddhist temple there. At first, it seemed abandoned. Soon we discovered there were many curious eyes. It was almost scary at this quite place, except for a section where rites of mourning happen. Once we saw the temple we passed by a monk with a chainsaw, huge pig and an angry dog. Then we reached stupas - tombstones of passed away monks. 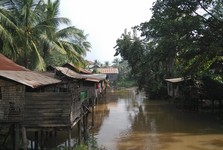 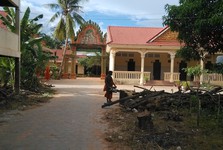 There was not much time left. Therefore we hoppend on our bikes to continue down to Phnom Krom. Once we were ascending the stairs it staretd to getting dark. Before we reached our point of interest a guard stopped us. We forgot that you need a ticket to enter Angkor. And such a ticket is valid for every of local temples. Yet het just smiled at us and let us go for couple of dollars.

Once we climbed the hill the sun was just setting. It seemed it wanted to swim in the lake. Its gilded rays spread across the surface. We were lucky there was nobody there. 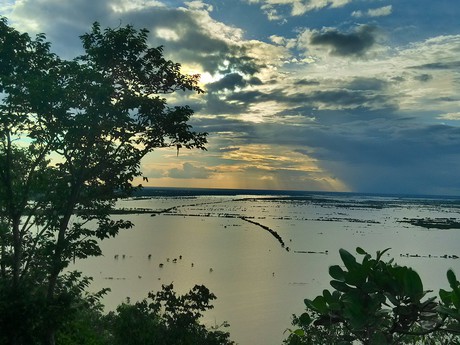 SIlently we observed the ruins of the temple, gilded lake surface which was turning red. We couldnt wait to see other temples including the famous Angkor Wat. A night jrouney by bike (yeah, no street lights) was the last merry adventury on this strenous day.