Over three hundred mass graves were founded in Cambodia

. The one at Choeung Ek is one of the most well-known. It is situated fifteen kilometers from the downtown of Phnom Penh. You can get there solely by tuk-tuk. While on our way we took a look at poorer parts of the city and breathed in huge amounts of dust. The driver waved back at us and said he would wait for us at the agreed-upon time.

We somehow expected it to not to be a pleasant visit. Still, the experience was really deep. They offered us headphones at the box office with a talk of one of the survivors. You get goose bumps on such a tour. You walk across beautiful landscape, feeling sun rays on your shoulders and cold air in palm shade. But in your headphones, you hear that these palms were murder weapons. At branches where palm leaves fell off were left sharp spikes on which the victims of genocide were impaled.

The talk takes you to every place the victims went through. The killing was done mostly at night. The victims often did not expect what would happen. „Magical Tree “ had loudspeakers with music turned on loud to howl down screaming of people being murdered. To spare ammunition which was expensive, usually heavy and sharp farm tools were used – sickles, scythes, hammers...

Traces of chemical tools were found in mass graves. These were used to increase the speed of body decomposition or kill heavily injured. The most cruel thing of all was the „Killing Tree “. If your question is what the Khmer Rouges did to new-borns and children… Well, this tree provides an answer. Small bodies were shattered at its massive trunk. The murderers held bodies by the legs and hit the tree with full force. 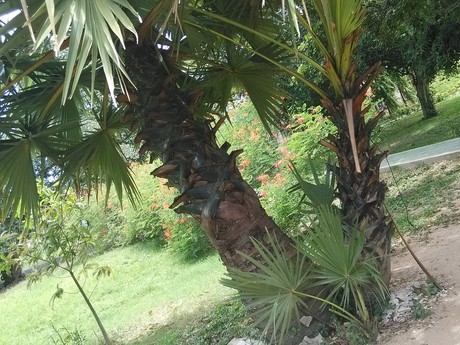 Our last stop was the Buddhist stupa, the most noticeable place at the entire memorial. It seems as beautiful as other Buddhist buildings in the city. Its golden roof glitters in the blue sky. Once you get closer you can recognize its walls being made of glass. Inside there are over five thousand skulls of the victims of the Killing Fields.

These places are going to stay in your memory – half revealed mass graves, impressive stupa, palms which can easily become weapons… Cambodian government even ask tourists to visit places linked to the cruelties of the Khmer Rouges. It is a good idea. Horrible things that happened there shouldn’t be forgotten.