Khmer Rouges led by infamous Pol Pot seized the country in the middle of 1975. He started his cruel rule on the basis of deformed Marxism-Leninism, Cambodian nationalism and some religious additions. Their goal was to transform Kambodžu from a feudal country to the state of comunism, the most advanced state in history according to Marxist history. Pol Pot started to destroy cities he considered bases of capitalism. He resettled their inhabitants to the country. He decide to re-educate them through work. Pol Pot's residents was in half-empty city of Phnompenh. 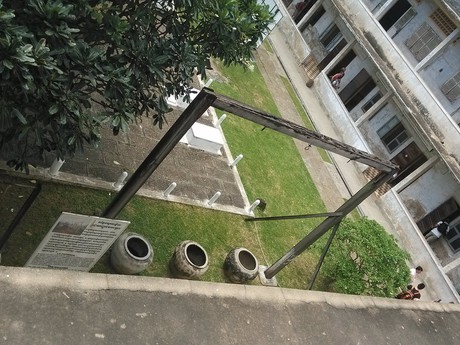 The Khem Rouges canceled money , trade, unified clothing and the life of Cambodians. People toiled all day on the fields, fishing was forbidden, or gathering

fallen fruits. Married couples were allowed to see one another only on set times to make children. Then the children were taken from there to be raised separately.

In the yers 1976–1978 bloody purges were done. Tuol Sleng, the prison and a torture room became the symbol of the purges. Today, there is the Museum of Genocide . Unbelievable Barbaric executions were done there. People were sent to the “Killing Fields” to be shot there, trampled down by the elephants, executed by machetes, or killed by hoes. Many were tortured even worse and longer. Their bodies were then thrown into mass graves even though they were often still partially alive.

The tyranny of Khmer Rouges was put to an end by Vietnamese in 1979. The relations between the countries deteriorated and Vietnam invaded Cambodia.

The Museum of Genocide is one of the places which is a memory of these cruel terrible years. Once a school the building received the sign S-21. About 16 thousand people were imprisoned here. Only twelve of them survived. Pictures were taken of every new prisoner. Then he was put into his cell and was forced to abide by absolutely absurd rules. Prisoners were sitting tied up. They couldn’t move nor turn. Then they were tortured and forced to confess. The confession was written down and the prisoner was sent to the execution grounds. Even children were among executioners. 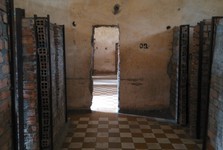 When you walk through the rooms where prisoners were tortured it is hard to comprehend what extent of cruelty was performed there, how many people died and how much did they suffer. Palms on the courtyard were witnesses to all of this. On this courtyard, prisoners were soaked in barrels, tortured and execuded. But the palms are quiet. Pol Pot, the main architect of this horrible theater, died peacefuly long time ago.