en.infoglobe.cz » Cambodia, Phonompenh: Shall We Talk with the King in Czech?

The royal palace is the greatest lure at Phnompenh. For Czechs it is even more interesting. King Norodom Sihamoni is the only monarch who speaks Czech fluently. In 1962, his father dispatched him to Prague to study the art of dance. His father was the famous Norodom Sihanuk who had many wifes and lovers. Norodom Sihamoni has twelve step-siblings. Only with one brother does he share the same mother and father. 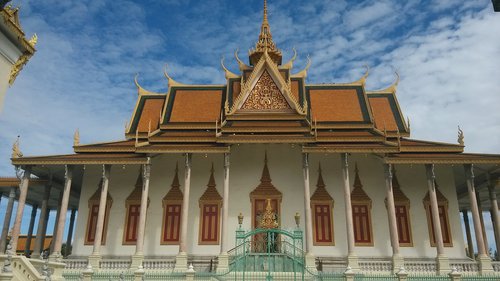 In 1967, the King began his studies at the Prague Conservatory. Beginning 1971, he started to study dance, music and theater at AMU. He returned to Cambodia in 1975 but then the country was held by the Khmer Rouges. The young prince was forced to work hard on the fields. Thanks to his father who claimed his son would attend a graduation ceremony he returned to Czechoslovakia. From there he traveled to North Korea where his father was a guest of Kim Il-sung. 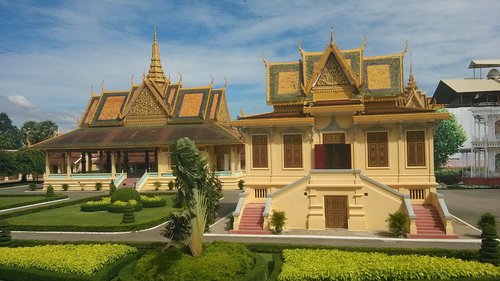 Sihamoni was lured back to Cambodia by trick in 1976. This ended in his house arrest. Once Vietnam liberated Cambodia, the royal family left to China and the prince later for Paris. There he founded a dance school and also served as ambassador of Cambodia at UNESCO, Paris. In 2004, he was elected a king after his father resigned. However, his role is rather ceremonial.

Ten years ago, the king visited the Czech Republic. He was granted the Prague citizenship as world's only monarch. Yet he spends his life at royal palace. 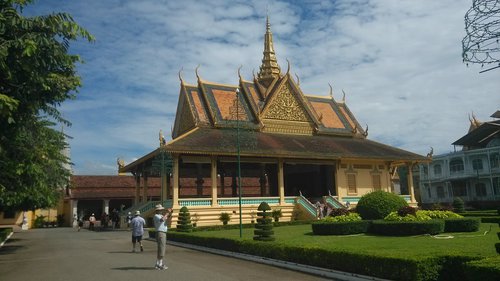 The royal palace was built in the beginning of the 19th century. Its pompousness makes it look like the palace in

v Bangkok. Only some sections of the palace are open to the public. Still these are worth visiting. Everybody needs to cover their knees and shoulders. You will feel heat but the vistas are worthy reward.

The most well-known structure at the palace is the Silver Pagoda. Its name was given to it for its silver floor. At some places, it is covered with a carpet. However, at some places you can see that the silver floor is truly there. Another lure is the amazing Emerald Buddha statue . The Throne hall is another interesting place at the palace. You cant enter it and you are even not allowed to take pictures of it from behind windows. Wise faces of white Buddhas face all four directions on its towers..

We were amazed by the palace. However, we knew there would be less pleasant spectacle on the following day. We planned to visit the Museum of Genocide and the Killing Fields near the city.