Published: 1.9.2012
Again our bus is going on the new highway, which I'd read that it was probably built for only one reason - to make available the Tibetan Buddhist monastery Ta'er. And really, this time not waiting for us any boneshaker dirt road and conveniently parked outside the gates of a large complex at the foot of greenish mountains. 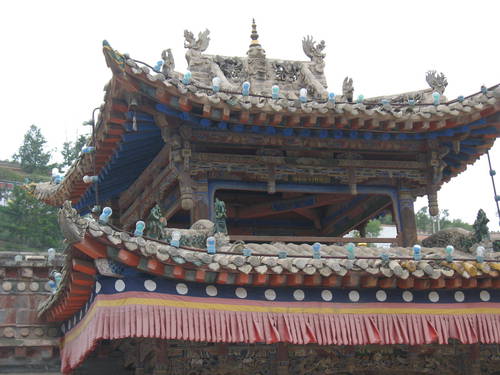 Suddenly we are among white stone buildings with russet roofs, among them are palaces, temples with golden arches, many built as terraces over them. We pass the pilgrims, who are a colourful assortment of all walks of life and nationalities. Virtually everyone holding a prayer wheel mani khorlo, with which mainly older people incessantly spinning. I ask our guide, what does this mean, and I find out that each turn of the little mill sends a prayer to heaven and the owner confirms the journey to the next life, which he wants to reincarnate in a better being.

In few moments I feel like I'm in one of the past century. Llamas in burgundy robes and clink brass bells standing around or through all around us, before entering temples sit beggars in tattered rags, dozens of women with braids kneeling on the ground, hands weeded forward and provided a kind of wooden pads on the palms, puts the whole body on the ground and inch of the ground to a standing position. Mechanically it repeated many times in a row. It is said to also the preparing for reincarnation. 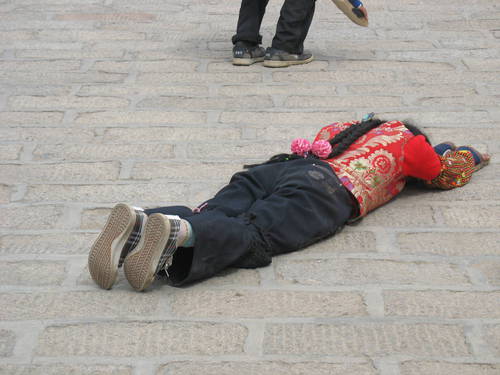 Here no one look at us strange way, we are not a rarity in the monastery are obviously used to tourists, including those from the west. Although we do not meet any such, but Chinese youngsters in baseball caps and girls in dress with umbrellas over their heads are proof of a vibrant tourism industry. For a fee, of course, which caters to our guide, we enter into the very heart of one of the temples. We are in the twilight of low buildings in a sort of lobby, which is decorated with hundreds of Buddha statues, there's a smell of incense smoke and the smell of yak butter specific - this is fill for lamps that are constantly lit before each of Buddhist statues.

The walls are decorated with thangkas, some relics you can see just behind the glass case. We walk into the next room, which is just as dark, no windows and at first glance it is clear that this is a bedroom of monks. In long rows side by side is a wooden bed on them multicoloured pillows or blankets, all tinged with the smell never ventilated space. It makes me a little dizzy, and I am glad to find myself outdoors - in the courtyard of the temple, which is surrounded on all sides by stone archways lead from there and narrow winding streets toward the other buildings of the complex. Atrium is used for meditation as well as prayer, under the arcades are spaced pads on them and dozens of monks who either sit motionless, or lie down on his knees and rise again - nourishing exercises, many of them have pretty dewy forehead. 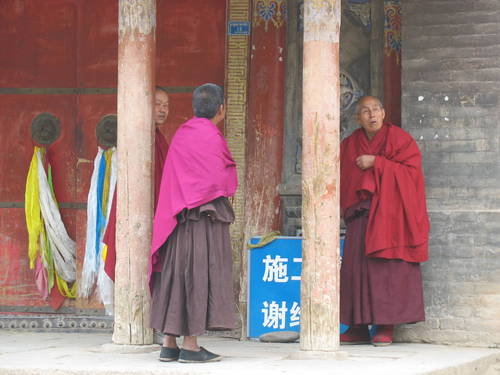 With interest and respect for the complete silence watching (we got command) life in the monastery, emotionally moving on to far into the past, when there are a lot of fast-discuss - you will hear the sound of a typical mobile phone, and I stare at the monk kneeling near the corner, as interrupts his contemplation, peace and mobile lifts hushed voice discussion with someone. His head got a little tangled - with whom you can talk about a Tibetan monk? This I won´t know, unfortunately,...

Another walk thru Palace but shows, however, that this was not an isolated phenomenon.  We meet monks everywhere and I see more and more with the phone to your ear. When we come out of the temple, shiny Mercedes passed us, obviously full of shaven heads in burgundy robes. We could see an interesting combination of millennial religious traditions and innovations of the 21st century. 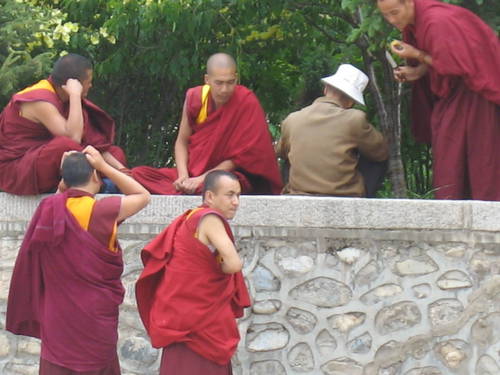 I would like a photo of a monk, but only to one of them and sneak hint of what I want, waving a dismissive hand. Will move a bit further on the vast square, and suddenly I see two monks with the guy in the straw hat alongside grinning into the camera lens. Came my moment and head there - luckily I notice material circumstances – hiker gave each of them note as farewell. Resolve to try the same method and my success - I and the residents of the mythical Buddhist monastery Ta'er are immortalized.

Published: 25.8.2012
Qinghai Province fascinates me at every step, or rather at every kilometre. A mixture of Buddhism and Muslim world humbly exist together is incredibly interesting phenomenon, especially for journalists from far, accelerated, often impersonal and intolerant Europe. This time we are heading into the valley that lies in Rebkong area, the centre of Tibetan art in the province.

China: By Journalists Eye XIV: Back to 19th century

Published: 18.8.2012
The third day we devoured spell of western China and the knowledge that we have somewhere "behind" Tibet is our "ugly," said attractive. There, under the auspices of the Chinese Foreign Ministry, certainly can´t go, but Tibetan culture we meet at every step.

Published: 11.8.2012
Our bus finally stops at the end of a long, dirt track, in which about an hour ago has changed as if by magic a modern six-lane highway. My worries we will finish up on the roof, fortunately not materialized, we drove past woods and gouged out before us, football pitch right and green has left. Everything was dominated by ground shabby, battered gray building - school.

China: By Journalists Eye I. - Fight On Tiananmen Square

Published: 12.5.2012
Finally Beijing. Our journalistic team has battled a series of security checks and we find ourselves in an endless airport lounge. The feeling that the local crowd have to absorb us was not correct. Then we see a smiling Chinese lady and in minutes everyone sit in a luxury air-conditioned bus.

Published: 13.2.2012
China - land of unlimited possibilities, a country which, unlike the developed world is growing and whose economic growth in today's world seems like a miracle. Country with many cultural and historical monuments, a country, that sends a man into space.

China: By Journalists Eyes IX: Among Chinese Students Of Czech Or "Around Hradec"

Published: 14.7.2012
China's hard work and discipline accompanied us at every step and a visit of Beijing Foreign Studies University just confirmed it. Here we had a chance to appreciate even more characteristic of Chinese - adaptability.

China: By Journalists Eyes V: China: Life In The Streets Of Beijing

Published: 16.6.2012
From the bus window, we could see Beijing crisscross, authentic atmosphere of the streets and alleys and hundreds of thousands of people in them, but we sucked up in the role of hikers and then of course after "bedtime" is ended with an official dinner with selected potent and our tired guide disappeared behind hotel room door.

Published: 18.2.2012
Huge China is a country of contrasts. It consists of several climatic zones, there you can find a noisy city full of glass skyscrapers and smog, but also the traditional mountain village with mud houses and rice plantations.

Published: 19.5.2012
Being in China and not visit the Great Wall is equal to savagery. The official program that the Chinese government has prepared us is this trip only alternative and we have to earn deserve it. From early morning we sit in the Red Hall headquarters of the Communist Party of the People's Republic of China and pretend to listen to propaganda papers enthusiastic speakers.

China: By Journalists Eyes IV. - How To Ride In Beijing

Published: 2.6.2012
We "elect" could see the Chinese megalopolis through largely a luxury air-conditioned bus with a smiling dude behind the wheel. It is also part of local standard, certainly not just for a small group of natives and of course for wealthy tourists.

Published: 21.7.2012
After four days in Beijing we packed suitcases and with our guide got on the plane. Before us is a big unknown - we are moving into one of the poorest provinces of China to west to the Tibetan border. It won´t be surprise just for us, but also our girls will visit Beijing - Ai Qing the first time in their life.

China: By Journalists Eyes VI: Around The Chinese-Covered Table

Published: 23.6.2012
The first dining experience in China didn’t impress me too much. Five stars beautiful hotel, a lot of fuss on arrival our journalistic delegation - a bow and waving fans welcomed us beauties in traditional dress, from the table.

Published: 25.2.2012
Ancient city of Xian, or Si-an is about 3000 years old. It is one of the most important places throughout Chinese history, since it is here that housed 11 Chinese imperial dynasties. At the time when Beijing was a mere village, golden Si - an shone by bright colours of temples, wide boulevards and architectural excesses.

Published: 26.5.2012
World media today proclaims that the Chinese state television CCTV triumphantly finished its job and officially opened a new headquarters in Beijing. The futuristic-looking building that should symbolizes the emergence of China on the world stage, journalists dubbed it - thanks to the remarkable shape for her grace in the world called the Chinese "Great boxers."

China: By Journalists Eyes XI: On The Yaks Farm

Published: 28.7.2012
Morning view from hotel window in Xining reveals a breathtaking backdrop. The city is surrounded by high mountains, over which the sun shines and I'm really looking forward for today's trip, which has sometimes copied the former trade artery between Asia and Europe - the Silk Road. The fact that I wet my feet in the Yellow River, it is still like science fiction.

China: By Journalists Eyes VII: The jump to the Chinese market 1.

Published: 30.6.2012
Beijing is for us concentration of paradoxes. Endless skyscrapers, luxury living residences, shops of all tech brands on one side and then thousands of artifacts, ancient Chinese culture. We are interested in both of it, but the traditional one is but much more interesting.

China: By Journalists Eyes VIII: The Jump To The Chinese Market 2.

Published: 7.7.2012
Visit of Beijing food market and edibles of all kinds, shapes, smells, often of unknown origin and a long life even more dangerously we were really stunned for a moment and quietly wandering Chinese traders staring at the blonde, which move at a rate of marathon runners. Phew. We are off and miraculously in front of us pleasantly familiar signs shucks "Starbucks Coffee".

China: By Journalists Eyes XII: To See The Yellow River

Published: 4.8.2012
Our bus goes on the perfectly smooth highway, where we ones a time meet some man in a hat, with a scarf over his face and a broom in his hand - he is alone, far from him you can´t see anything of civilization, the high mountains on both sides, and he sweeps the shoulder.