Published: 8.9.2012
Ta'er Monastery stands in its place under the mountains near the capital city of Qinghai province since 1560. Main wings shining with colours, teeming with monks, but the buildings with curly roofs that stand up in the hills, doesn’t seem so vividly. In the past, there supposedly lived about 3 thousand monks. Today, there's a fifth of them.

In the 50 years of last century, namely Chinese and Mao Zedong's "Cultural Revolution" mercilessly destroyed everything old, traditional and religious that did not fit into their idea ideal communist society. Tibetan Buddhist monasteries with their deeply rooted religious traditions have become one of the major targets of systematic "exorcism". Mao's Red Guards left to stand a mere fraction of the monasteries and all the rest were with part of its inhabitants buried.

With the reconstruction of devastated Buddhist settlement began only in the 80th the last century. The Chinese government is in "opening the West" embarked on efforts to "preserve and develop the original Tibetan culture and religion." Repairs century palaces definitely don’t run as fast as construction of highways and railways, the result is visible and we - journalists see and here we are again, from what we preach at home, how nicely Beijing takes care. 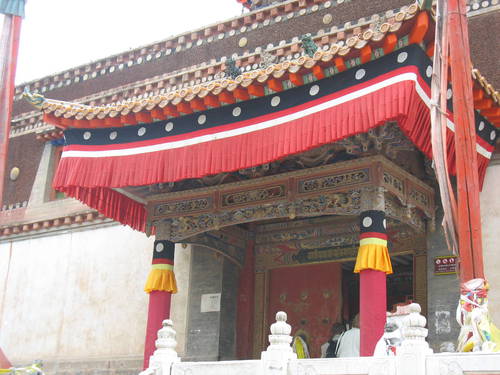 Ta'er monastery belongs to one of those in which they have invested a lot. Moreover, as our guide points, getting traffic to your generous amount of money from the state and believers are not too stingy. Sources of finance are surely the tourists - There is even a great gift shop and a café with a terrace overlooking the countryside.

Typical decorations are statues of Buddha in the yellow hat, which depict Tsongkhapa, founder of the Yellow Sect caps, whose head is the Dalai Lama today. Tsongkhapa was born one hundred years before he began to build the temple, and it was at his birthplace. The most beautiful and most precious temple complex has a gilded roof - the sun's rays reflected from 100 kg of gold. Without dark glasses that look even unbearable.

I enjoy all the beauty, but tinsel it was enough and tourists to qinghai ratios as well. I want to see some more and I know where to go. Quietly slip away from the group colleagues and I will get through the next few stone steps uphill. After a few steps, you can enjoy an amazing panoramic view, and I look forward to seeing you at the top, out of all the major palaces, temples and roads. 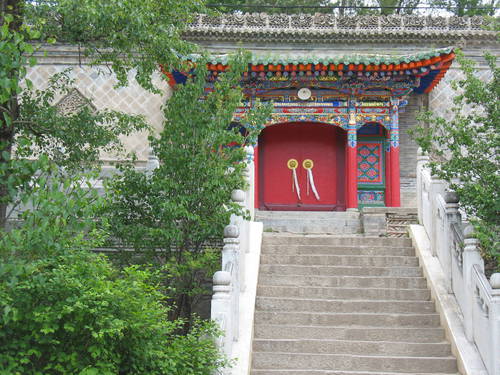 On both sides of the stairs standing houses, terraces set above each other. To rectify of them wasn’t enough money - they are battered and faded, the more I take heart. Walk up all alone, it looks like no one lives there, meet a few cats on ledges. Finally, the last step and I find myself in an ordinary garden where sheep graze, and in the distance I see three very old monks who sit under a tree. I do not want to disturb them, so just enjoy views and the peaceful atmosphere seemed far away from civilization, which is a few meters below us.

View of the watch is relentless, in a few minutes we leave. Once again, therefore, turn around and trot back up the stairs. Suddenly I pass a narrow alley behind one of the houses, which moves slowly aged monk. It hunched, he sees me, I think you point the lens and clicks, I can´t resist. The sound of the camera lets him know about me, and before I get a grip, just flies around my head and a huge stone monk begins loudly cursing and threatening. I'm running as my legs just did not want to offend him, but I was really shocked reaction - enough for a few inches, and I had a hole in his head. As you can see, even Buddhist monks can pretty furious. 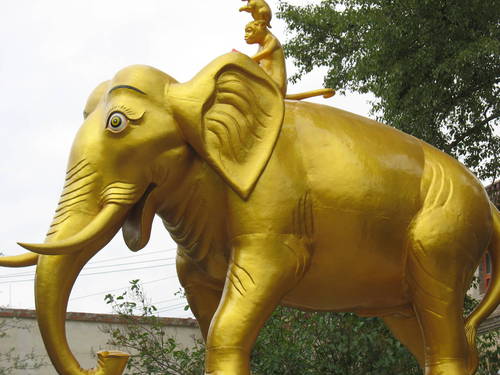 Published: 11.8.2012
Our bus finally stops at the end of a long, dirt track, in which about an hour ago has changed as if by magic a modern six-lane highway. My worries we will finish up on the roof, fortunately not materialized, we drove past woods and gouged out before us, football pitch right and green has left. Everything was dominated by ground shabby, battered gray building - school.

Published: 25.8.2012
Qinghai Province fascinates me at every step, or rather at every kilometre. A mixture of Buddhism and Muslim world humbly exist together is incredibly interesting phenomenon, especially for journalists from far, accelerated, often impersonal and intolerant Europe. This time we are heading into the valley that lies in Rebkong area, the centre of Tibetan art in the province.

China: By Journalists Eyes V: China: Life In The Streets Of Beijing

Published: 16.6.2012
From the bus window, we could see Beijing crisscross, authentic atmosphere of the streets and alleys and hundreds of thousands of people in them, but we sucked up in the role of hikers and then of course after "bedtime" is ended with an official dinner with selected potent and our tired guide disappeared behind hotel room door.

Published: 19.5.2012
Being in China and not visit the Great Wall is equal to savagery. The official program that the Chinese government has prepared us is this trip only alternative and we have to earn deserve it. From early morning we sit in the Red Hall headquarters of the Communist Party of the People's Republic of China and pretend to listen to propaganda papers enthusiastic speakers.