Published: 12.9.2015
Dali 大理 je belongs to the Pai 白 minority. At the first glimpse you realize the city feels differently than Han 汉 (i.e. ethnic Chinese) cities. Once we accommodated ourselves, we walked in the streets surrounding our hostel. Somehow we managed to find rooms in an area where were no foreign or Chinese tourists. A pleasant change.

We couldn’t have miss it as we stayed only several meters from Erhai lake 洱海 . We were shocked by its vastness despite the fact that we assumed it would be large. Children cooled down in shallow water at the shore. Old ladies washed clothes right next to them, waitresses gathered flowers for their restaurants, and fishermen tried to catch fish. 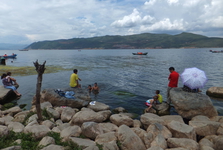 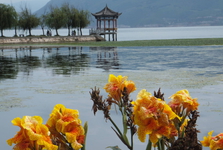 We reached a wooden summer house. From afar, we had already noted hunched people inside. 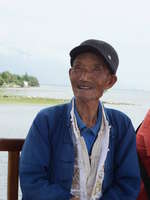 When we got closer, we realized that mysterious figure was an old man in traditional clothes . He wore a blue hat and an embroiled shirt. He smiled at us and greeted us.

Once we started talking he showed me his picture when he was young. A true handsome man was there. Once again we realized how fast our world changes. Then it was our turn. The old man convinced he collects photos of foreigners and foreign currency. He also drew his wallet and showed us pictures and different currencies. Then we truly regret we didn’t have any Czech money...

We had talked with the old man, took a picture with him, and returned back to the hostel. Freshly made bet awaited us and our landlady’s happy puppy as well. And, in my case, a fever...

I still felt pretty sick on the following day. P and B went for a trip in the mountains alone. Only T was my company. We accepted our landlady’s offer to lend a bike. One was bit rusty but still faster than walk. 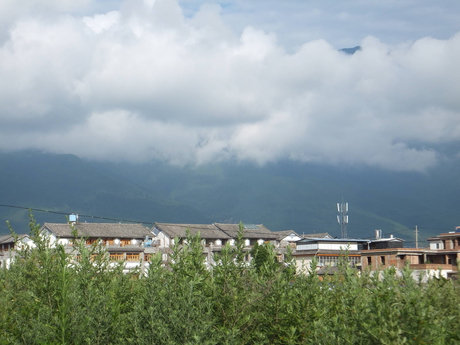 So the adventure might finally start. We stayed only couple of kilometers from Dali’s historical quarters. It was easy to reach it. Me and T simply mounted bikes and slowly set off straight ahead.

After while we realized, that we were at higher altitude than we had been used to at home. Hadn’t we seen city walls, we might have had hard time to actually return back. When we reached the walls, we locked our bikes and took a deep breath. We didn’t even know that the best would only come – well, it would be a pity to tell it now and not to save it for later…

China – All Is Well That Ends Well

Published: 20.2.2016
It was only couple of minutes before the departure. T and P were about to fly back to the Czech Republic. Me and B were ready to travel to Vietnam for another adventure. There was much to remember. T and P looked pretty tired. It is no easy thing to travel across China in one month. Many say they haven’t experienced cultural shock but still China is much different from Europe.

China: Just Talking – No, They Are Not All the Same

Published: 30.1.2016
The day had finally come. The day of T’s and P’s departure. The girls were preparing for the departure. Me and B had still some time before we left China. The best moments of our one year stay in China were running in our minds and we also give a thought on T and P. They would surely face many questions regarding China.

China: Just Talking – Yes, I Know How to Use Chopsticks

Published: 6.2.2016
When me and B were thinking at the airport about all prejudices our Czech friends have, we realized even our Chinese friends’ idea about our culture is not much accurate.

Published: 12.11.2015
National Museum’s depositories are rich on items. When they are open they let us to see the remnants of distant pass, distant lands, and troublesome journeys. “The Chinese Empire” is a new exhibition at Naprstkovo Museum that brings you China between the years 200 to 1650 AD.

Published: 29.8.2015
Next day morning, with thick rice cakes filled with delicious filling we attempted for the second time a trek to the Bamboo Temple (Qiongzhusi筇竹寺). To make matters more unpleasant, the sky was clouded and it started to rain. The bus didn’t arrived. So didn’t other buses.

China: Studies – Lijiang: A Secluded Place at the Lake

Published: 26.9.2015
Our time of departure from Dali 大理 had come. We still liked the place thanks to nice house-lady, her father and their gigantic pup even after several days. We took our backpacks and set off to a bus stop.

China: Studies – Niujie: There Are Mosques Even in Beijing

Published: 1.11.2014
I have written about one of Chinese minorities, the people of Hui (回族) in one of my previous articles. I praised their cuisine and their kindness and knowledge about the place of my origin.

Published: 1.8.2015
Kunming 昆明 woken us up to cloudy sky and light rain drumming into our window. It didn’t seem as if the weather was about to get better. We put our raincoats on and set off to adventure.

Published: 11.10.2014
In couple of articles already I mentioned the same topic – hot water drinking. Since young age I have been frightened to drink hot beverages when ill. It is easier and tastier to use just syrup with water, I had been always saying. And then I left to China.

Published: 11.4.2015
I am of those people who cannot enjoy shopping. Mostly I have this feeling that the time spent finding something could we spent much more efficiently. When I decide to go somewhere shopping I need time.

Published: 11.7.2015
Finally we were in the bus. We had to pay some yuans extra yet the likelihood of us eventually getting to Xichang 西昌 on time was growing. We had to catch a train going further down south.