We leave the town of Tunja for the capital. We don't want to go there much. But we plan to walk through the colonnial city and go away. On our way to Bogota, we manage to taste local arepa. It is quite different from the one we had in Cartageně. This one is sweet, like Czech pancakes. Moreover, we learn that Škoda car is called here "a Mercedes for the poor". 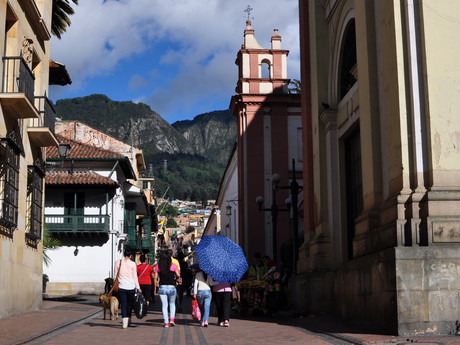 We move to La Candelaria district once we reach Bogota. Most buildings were built in the colonnial style or republic style. Most of them were declared historical or cultural landmarks. The most well preserved part of the district is to be found between the streets CAlle 9 and 13 and Carrera 2 and 5. Some houses are 470 old bamboo rooftops, and walls made of pigskin. There are over 500 organization, and art groups, museums, research centers, libraries, and universities. There are many hostels so most visitors go here. We visit couple of hostels but the prices are too high. The same goes for staff. In Colombia drogs are too cheap, cocain especially. Many travellers go there to enjoy cheap drugs. We take a look at the yellow church La Candelaria and then we leave this district.

Bogota's dominant colors are green and red, at least they say it. Green is the color of city parks and the mountains. You can see there Cerro de Monserrate, and Cerro de Guadalupe. The color red constitutes of many brick buildings. First, we go towards the main square called Plaza de Bolívar. It is Sunday. The city is full of people, and street artists. We There is so much to see. Dancers, musicians, entertainers, guinea pigs racing on which people bet. Street theater, a military parade at the palace... We simply don't know where to go first. Well, its sunday in the capital. People are off work so they want to have fun. 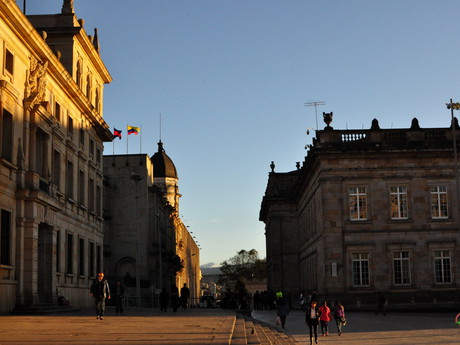 Plaza de Bolívar is the heart of the historic center. Before, this place was a public circus and a bull market. Today, cultural and social  events take there place as well. oreover, there is teh Congress - in a classical Greek style building (Capitolo Nacional). Opposite to the Congress there is Palacio de Justicia. Catedral Primada was completed in 1823. It is Bogota's largest temple. The only colonnial style building here is Capilla del Sagrario situated next to the temple. We sat for a while on the stairs to see it better for ourselves. A minute later, a beggar comes to us. For the third time, we rather stood up and walked away. There are many homeless in Bogota. Often we see some laying in the streets. Further out of the city center there is the park Third Milennium to which we walk into. And how surprised we get of how many homeless there are. They gather into groups so we rather walk away from the park. In Bogota, it seems better to stay inside the historic center. 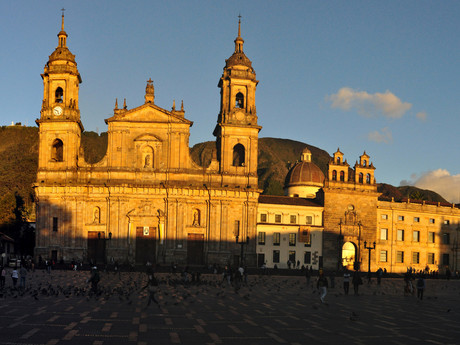 Its Sunday. This means the entrance to many museums is for free. First, we visit Museo Histórico Policía. There is quite a curiosity to see, Pablo Escobar's harley, or his jacket he was wearing when he was shot. Then we move to  Museo del Oro. There are over 13 thousand gold and 20 thousand clay jugs. These were made by all important pre-Hispanic cultures in Colombia. Galerie Museo Botero holds over 208 works. It was founded by the most famous Colombian artist Fernando Botero. The gallery holds 123 items by Botero, and 85 items by other artists.  Muzeum Casa focuses on history of periodicals. However, we are quite tired to go there. There is a lot to do in respect to culture and history in Bogota. We walk through sevreal streets, and see Iglesia San Francisco church. It was completed in 1611 making it the oldest church in Colombia. 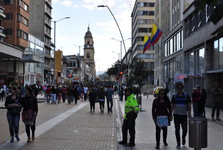 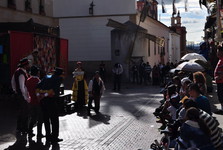 Simply put, Bogota is a city of extremes. Historic buildings vs modern skyscrapers. Local culture vs cosmopolitan culture. This can be a great place to start your trip to explore the past, taste local food, and enjoy the culture. Once you get tired of the big city as we did, leave for more tranquil place. Like Salento. This is exactly we are going to after Bogota.