en.infoglobe.cz » Colombia: from Medellin to Cartagena across Santa Fe

Santa Fe de Antioquia  town was founded in 1541 by Jorge Robled. It is the oldest town in the region and it is considered the "cradle of local people of paiso (antioqueña)“. Ciudad Madre because it was considered the capital of the province. It was declared a national cultural landmark in 1960. Everything here seems clean and fresh. Not many cars ride around here. Someitmes we had to avoid some motorbikes countless of which are in Colombia. 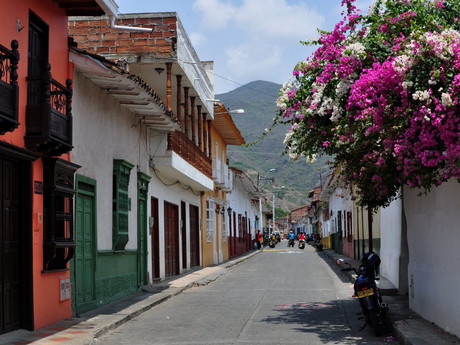 There is a water fountain and trees on the main square. There are also Colombine-themed souvenir stands - they sell key cases, products of leather or typical candy made of tamarind. The squre, the fountain and the church are beautiful lit at night. La Catedral Basílica Metropolitana was built between the years 1797 and 1837. A 47-meter tower dominates the church. 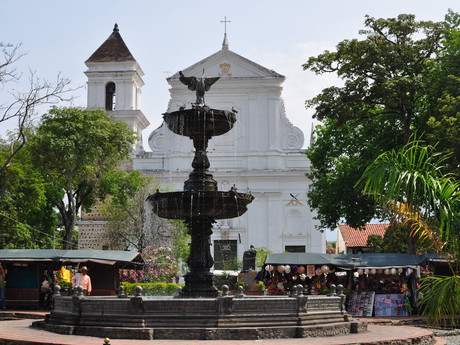 Plazuela Santa Barbara square is full of flowers and trees. Iglesia de Santa Bárbara is a baroque church made of brick and stone in 1728. Local poet Julio Vives Guerra called it the "grandmother of all churches in Antioquia province". The church of Nuestra Señora de Chiquinquirá (built between the years 1863 and 1868) used to be a cemetery at first and also a priest prison. We walk through local circular cemetery where we see a little church of Nuestra Señora del Carmen. Regional museum Museo Juan del Corral holds a collectio nof 496 items like documents, colonial art, archeological or ethnographical artifacts. Unfortunately, we didn't reach the bridge of Puente de Occidente. It was completed in 1895. The bridge is situated 5 kilometers behidn the town. 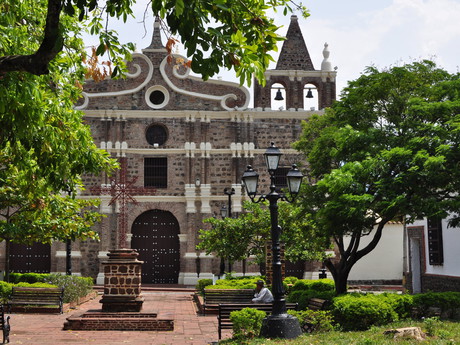 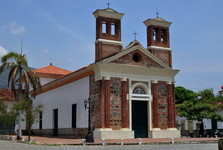 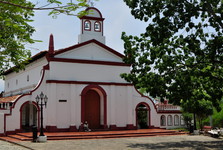 After two days in Santa Fe, we hit the road again. We try to hitchhike to the town of Turbo. Some drivers show us vulgar gestures, some show like they were cutting throat. Some get off their car and warn us about local guerillas and that we should quickly go away. Eventually, one driver stops and calms us down immediately. There are guerillas indeed, but we have no need to worry. In 2012, FARC announced that they wouldn't kidnap civilists any more. Moreover, there is the military and the policy guarding the area. The worst what could have happened to us would be a dead motorbiker on the road. They drive like crazy and don't wear helmets. When it rains accidents are very likely. We spot dwellings of local natives. They sell hand-made jewelry by the road. 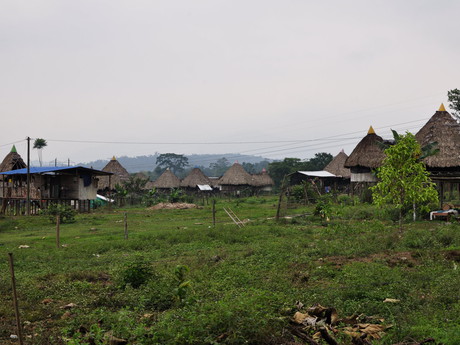 Eventually, we don't get to Turba and we end up in the village of Mutatá. The good thing about Colombia is that if you get to any village where you need to stay over night, it is easy to find a cheap hostel or some restaurant. And the police who try to keep things in order. There is not much to see apart a quiet square with a church. Kids with roller skates look at us and pose for photos. It seems they don't see tourists here often and apparently they are happy to lay eyes on some. 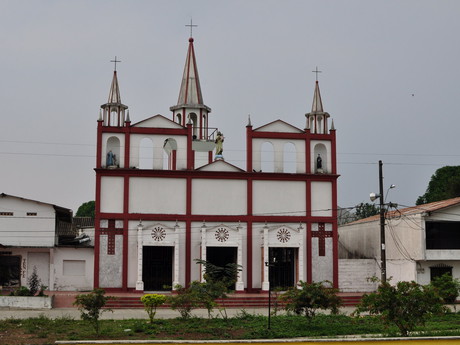 We drive through the ugly town quckly. Necocli is a town which is our next stop and we soon find out that for Colombians it is a very popular destination because they travel there to be on the sea. Therefore, the town is noisy and full of hotels. If one has lack of good night sleep, he wouldn't sleep here very well. Music plays all around all evening. We go on the beach. It is quiet there. Some people are still in the water during the sunset. Kids jump to the water from wharf. Boats float near the shore. It would be a beautiful place unless there was not garbage laying all around. El Carmen de Bolívar is our last stop before Cartagena. We stop there because it is getting late and it is about time to find some accomodation. It is simply another small town or rather a village we drive through. People look ta us curiously probably thinking where did we come from. But there is nothing to be worried about except music which could be playing all night. The Colombians love to have a beer on a terrace of a pub. They even have no need to talk to each other. Listening to loud salsa coming from speakers seems good enough. 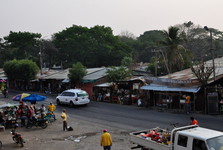 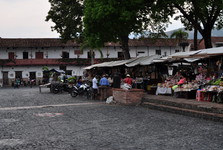