We reach Tunja on wavy, colorful terrain. Sometimes we see a waterfall or two and we are going uphill all the time. All of a sudden, we found ourselves at hihger altitude which gives us slight headaches.

What points out to the importance of the place are colonnial buildings, sights, and art. The main square is called Plaza de Bolívar de Tunja and is one of the largest squares in Colombia built under the Spanish rule. Also, there is a large statue of Bolivar. This public space is lined by colonnial buildings such as Catedral Basílica Metropolitana Santiago de Tunja; Casa del Fundador Gonzalo Suárez Rendón, and Alcaldía Municipal. 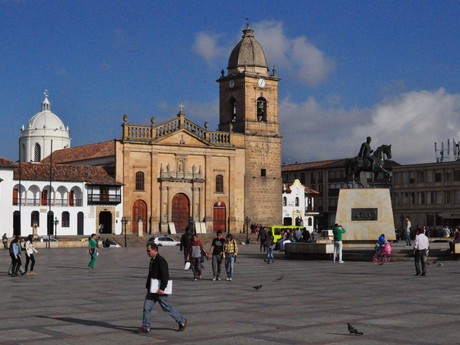 Catedral Basílica Metropolitana holds the remains of town's founder – G. S. Rendón. The building consists of three Gothic style aisles and four chapels. Inside you can find paintings by Gregorio Vasquez de Arce y Ceballos.  Casa del Fundador Gonzalo Suárez Rendón is a noble mantion constructed in the first half of the 16th century. Its stone front facade, and marble decoration made it one of the most luxurious mansions in the town. We plan to visit the mansion. A policeman opens it for us and he walks us throug the entire museum. The ceilings have rich murals depicting people, animals, and scenes from mythology. 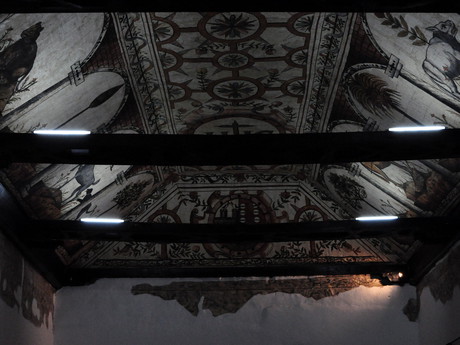 Tunja is a town for religious tourism. Churches are beautiful, Spanish era edefices. Some are made in the Mudejar style - a combination of Gothic and Moor architecture. This style flourished in during the 12th and 16th centuries in Spain. The style is the most apparent for its casette facades of cryptes. A great example of such architecture is church Santo Domingo built in 1658. Capilla del Rosario is a chapel which belongs to this church and is considered the "Sistine chapel of the Baroque style in Latin America“.

On the following day, we plan to visit Villa de Leyva, a village about an hour away. It was founded in 1572. In 1954, the village was declared a national landmark. Visitors can learn a lot about culture, history, nature, and see archeological sights. Villa de Leyva amazes tourists in its every corner. There are beautiful colonial buildings with with walls, and colorful windows. Basically, there is no modern architecture. Unlike Tunja or Bogota, the climate here is warmer and overall more pleasant. The inhabitants of Bogota, therefore, go here on weekends.

Na hlavním kamenném náměstí se nachází kostel Nuestra Señora del Rosario church is situated on the main stone paved square. It was built in the mid-17th century. In the middl,e there is a water fountain. When walking down stone paved streets we see other churches and cloisters among them Nuestra Señora del Carmen constructed in 1850. It was constructed by joining two existing chapels. The smaller, and simpler one is dedicated to Virgen del Carmen, the larger one is called „Iglesia de Mamá Linda“. 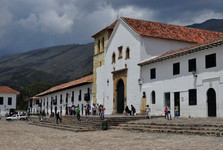 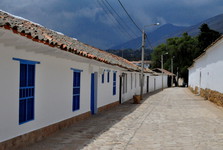 st laws in Colombia upon the declaration of independence.The Museum of Antonio Narino gives you more information on the life of the man who translated the Unversal Declaration of Human Rights from French to Spanish. Then he printed out and distributed it

Three blocs from the main square, a market takes place each Saturday. Unlike quiet streets in the town, here it is busy. People sell here clothes, tools, or food. We buy baked potatoes and local sausages. Then we move back to Tunja. We have some problems with money withdrawal as we tried to do it at five ATM machines. Then we say our farewells to these colonial towns.