en.infoglobe.cz » Croatia: On the Islands Of Hvar II.

In case, you will decide for a slight increase adrenaline in your blood, I recommend to try rafting on the Cetina river (it depends from the company you choose, from your age, physical abilities and health status), or pass the island on a safari car field, with whom he get to the point and path where you would ordinary passenger car, although possibly get, but I would rather that than risk. We have chosen on the recommendation of Rafter, with whom we were really bored. By mix of Croatian, Czech, Slovak and English languages he told us something about the river and surrounding countryside. Our raft was about the only one with the number six passengers in the boat plus one leader, which is much better than when you are on a raft twelve and every oar takes the wind, all shout and nobody can´t hear commands and a raft leader. Among other things, we were also probably the only raft that was completely wet, swim in a ten-degree water in a cave, climbed the slippery rocks in the dark in the same cave, and then jumped off a cliff from a height of five and ten meters (of course, who did not want to try might not). Believe me, if you really will not catch the nose, such as sinus irrigation you've experienced before. An added bonus was accompanying kayak whose owner us photographed three hours of rafting. 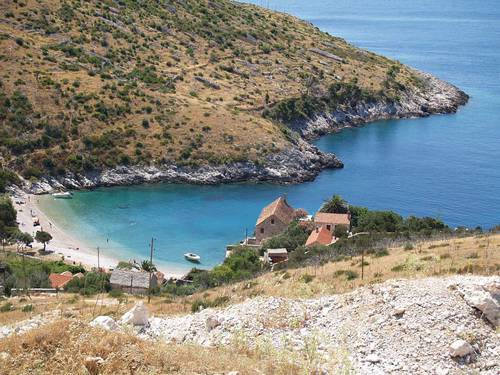 Don´t take anything that you can destroy when you are rafting, or that shouldn´t be wet. Wear swimsuit, your feet fitted with the anti-skid water shoes (and quite cheap enough, just to make you slipping in them), or special sandals designed for water sports, and a raft Include a bottle of water. Leave all valuables at home or in a waterproof bag, which will be secure by raft leader or you can leave everything in the accompanying vehicle. Finally, be sure to cream paint in the sun - the water level in clear weather acts like a mirror. And one more detail: be sure to dry off in a car, clothes and shoes to change. 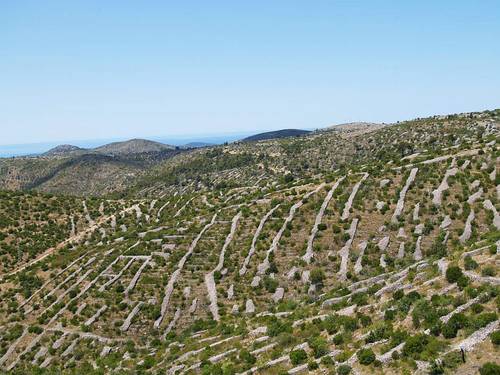 Hvar island is about 70 km long and has the most sunny days a year throughout Croatia. There is no mountain too high, although a few steep rocky cliffs where you can find. Although a few years ago almost half of the island fire burned, it is still very picturesque, smells of lavender, rosemary and other herbs. Like us grow apple trees and pear trees, there grow olive trees, vines, fig trees and lavender, from which you can pick fresh figs, anywhere on a hill on a tour of the island. By the way, you can eat fresh figs with skin (what we knew before we told the island guide). Fresh ripe olives are amazing - they were part of my meal every evening and I was one that was between them and the black ones, which I don´t like too much. 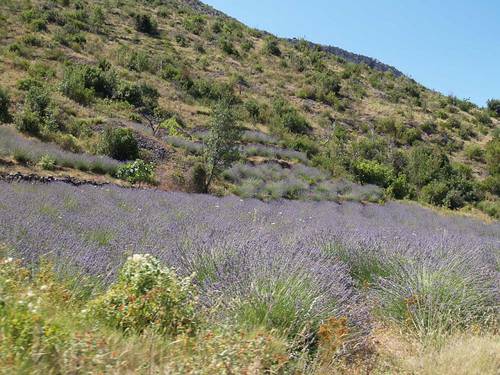 As for Lavender, you will be surprised of the fields on which it once people grow. Fields are

enclosed by stone walls, where there are hundreds of kilometres. At first we did not understand what these walls are the remains before us by our ignorance and bizarre attempts to consider the causes explained. The fields in the lowlands of the island used to be grown in large olive trees and vines. The lavender not left the place, so people began to cultivate it in the hills. The problem that had to solve was that the hills were dotted with tons of stones of various sizes, so they decided to collect these stones. So this way came up the stone wall, enclosing by single lavender fields.

In some places the fields are called trims - small mounds of stone with a hole through which you can see inside. Trims served working in the fields to rest during the great heat, or protect them in the rain. Can you

imagine? Everywhere there are fragrant lavender and stone walls - a wonderful combination. In this case it was not a creation of the garden, respectively island architecture, but a trade. Lavender was once valued herb that was dried or made into lavender oil used today in medical and cosmetic purposes. On the island today buy its wholly owned version. Today, lavender is grown on the island only a few peasants and tourists is intended as a souvenir in the form of scented sachets, dried bundles or pure oil. The reason is prosaic - price. Countries such as France to use its processing machines, which price of lavender and products dropped. Manual processing of herbs ceased to have meaning. Guide to the island, we guarantee that Hvar lavender is now very good, yet it takes so little - the sun, stony soil and can get by with a minimal amount of water from the sky.

The visit of island I recommend anyone who likes peace, sun, picturesque rock cliffs washed by the waves of the sea, and those who like to seek out and discover a magical place created by nature. You will find a lagoon with crystal clear turquoise water, which can be reached only on foot, when leave your car on the road over the sea, you will discover an abandoned stone houses, wild horses grazing on dry slopes of hills, a large white cross, towering majestically over the island or observation on which turns firemen with their hunting dogs, supervisors and protecting the island before the fire. 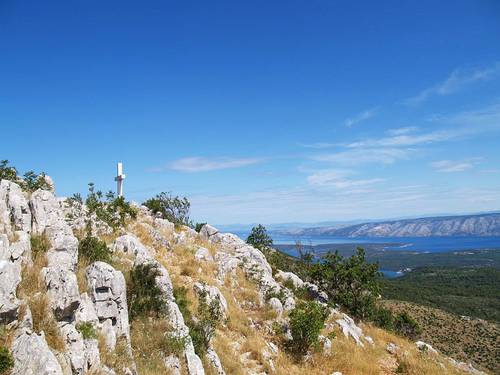