Bus would have been cheaper but we decided for this option – for it guaranteed us comfort and safety and also air conditioning makes buses unnecessary cold. 17 degrees Celsius is considered a normal temperature inside a bus. Anyway, we experienced thigns worth remembering. We would have rather gone uphill on foot. Breaks squeaked dangerously and the car looked liked it was about to break done anytime. Everybody passed us on the freeway (expect deadly skinny horses). The promised two hours of the ride lenght eventually became four. The cab driver was ok to stop and have a snack. Well, that's just Cuba. 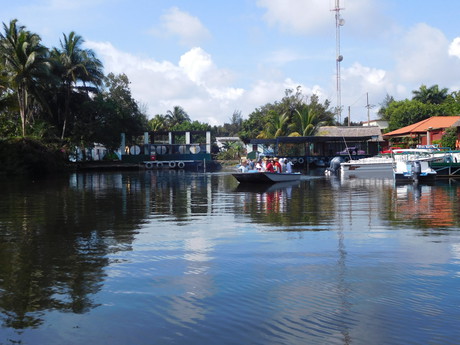 Playa Larga is situated in the historic Bay of Pigs (Bahía de Cochinos) on Península de Zapata. The River Hatiguanico flows through this territory. It is the largest marshalnd in the Carribbean. Also, the Montemar National Park is situated on this peninsula. Mangrove thrives on this peninsula. Some may even spot a manatee swimming in the marshlands. Moreover, many different species of birds live here as well as crocodiles. Any national park may be entered (if not through designated tourist entrances) only with a tourist guide. 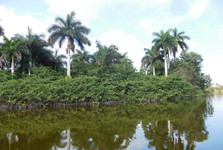 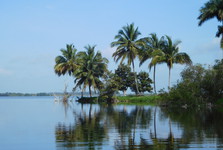 On the following day in the morning, we set off to Guamá. It is only about 15 minutes of a car ride from Playa Largo. Statues to Cuban soldiers who were killed in the Bay of the Pigs invasion stand along the road. There are two attractions in Guamá – a motorboat ride to Laguna del Tesoro which also features a tour on Villa Guamá island and a visit to Criadero de Cocodrilos crocodille farm. The first trip costs 12 CUC (about 260 CZK) for an adult. I highly recommend it. We were thrilled to be there. Hopefully our photos make it apparent. The motorboat ride is very refreshing. Seeing a village with huts is charming. Moreover, there you can buy cheaper souvenirs than at the cashier's desk. 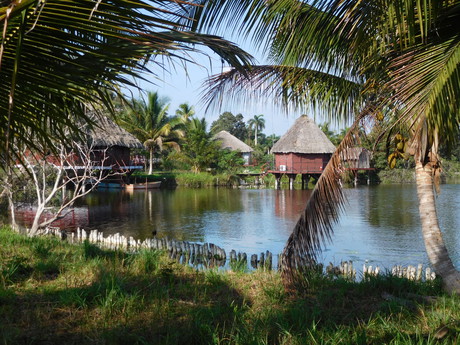 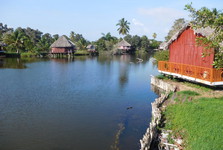 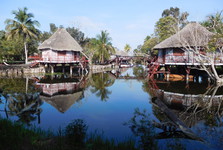 Initially, we hadn't intended to visit the crocodille farm. There are many more interesting things to do in Cuba. On the other hand, we were already there. Therefore, we went to see it. The tour costs only 5 CUC. Apart from crocodilles, the farm also features turtles, hutia kongs (known as tree rats or tree coypus), and iguans. The farm would be better described as a beautiful parm park featuring a lake and water lillies. There are wooden houses housing a restaurant and a souvenir store. Somewhere in the middle through the park, there is an unpleasant spot where visitors can have a picture taken of them with a baby crocodille which is leashed and its mouth is wrapped around so it wouldn't harm anyone. They put the baby crocodille anywhere and even put a straw hat on its head. You can even nestle a baby crocodille in your arms without it being unnecessary leashed. Large crocodilles are the greatest attraction over here. You can feed them for 2 CUC. You don't exactly throw meat to their mouth but you get a rod with a fish hanging on a cord down from it. Clicking of their huge mouths and the force with which crocodilles take the fish is an amazing experience. However, be aware of the guy who staffs this activite for he will frighten you somewhere in the middle through the feeding. 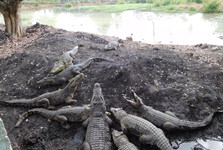 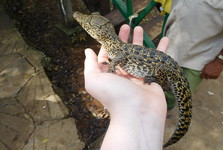 Once we were done at the crocodille farm, we set off to observe hummingbirds. This activity is a vailable at Mr Barnabe Hernandez Ulloa garden (bernabe.hernandez@nauta.cu) which is about 5 kilometers  from Playa Largo. Mr Bernabé is very pleasant. He shows you his humming birds as well as his personal pet – a  hutia-congu who loves to be rubbed. The entrance is free of charge. 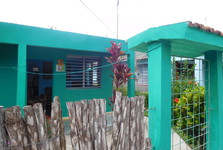 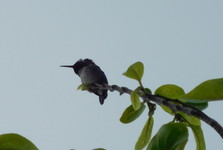 We spent the afternoon on a beach. Howover, we were greatly disappointed. Even though it is at the Caribbean Sea, nobody maintains the beach. The beach here is very shallow and the sea bad is wavy. Not a place sutiable for swimming. On the other hand, if you like to kite, you will have fun here. 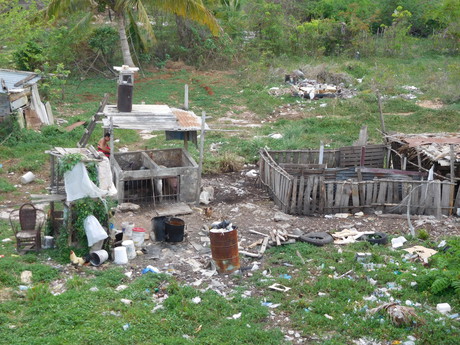 Trinidad, a colonial city in the south, was our next stop. Here we made use of the official taxi colectivos. Man was our experience filled with adrenaline...

Published: 21.12.2019
Today, together with us, you will set out on one of the most popular trips in the Dominican Republic, namely the tropical Caribbean island of Saona, which belongs to the del Este National Park. It is about an hour's drive from Punta Cana, the rest of the way by speedboat. You can also choose Czech guides who have lived here for several years. The trip is all inclusive, so the price inherently includes the possibility of consuming local rum, soft drinks and meals throughout the day.