I arrive at vesničky Dipkarpaz village. In this village, a church, mosque, Turkish tea shop, Greek kafenio, Turkish school, and greek school stand adjacent to each other. People live here together without any problems. Perhaps this is due to the proximity of the St Andrew's site of pilgrimage. St Andrew cured eye problems. Turkish as well as Greeks make pilgrimages there. The bishop arrives at the village whenever there is a wedding or baptism. Even though Karpaz is well known national park and iti s forbbiden to build houses, or hotels, people can be engaged in agriculture. Moreover, the soil is very fertile here. Olive trees are all around, as well as carob trees, and flowers. however, I haven't seen any orchids so far. 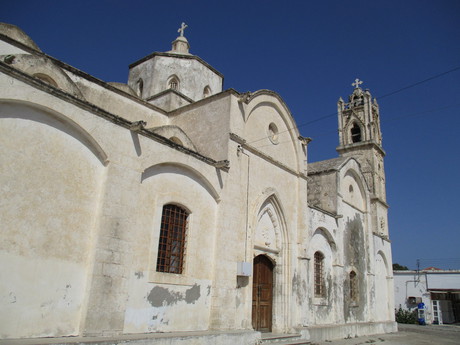 I stop by on scenic vista above the "Golden beach." I go through the gate and a large fence and head to the miraclous water of St Andrew stream. I enter the church with amazing frescoes inside. A herd of donkies roams around on the yeard. I bought them some carrot. Now I am about to step on beautiful, long, and crowdless "golden beach". There I see a flock of dolphines in the distance. 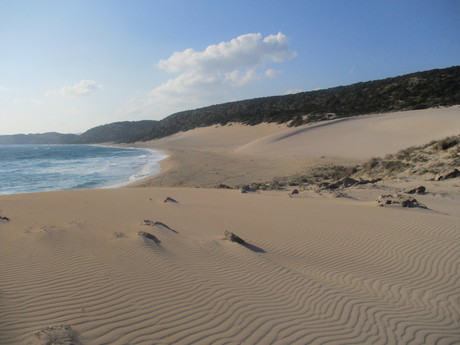 We are returning to Famagusta. Then I am crossing borders to the south of Cyprus – the former capital of Pafos. The city has massive fortification. People here were very rich. Therefore, there are over 100 beautiful mosaics to which I am really looking forward for. The road goes through Larnaka first. There is also an international airport the Greeks built 7 months after Turkey seized northern Cyprus and the then Ercan international airport 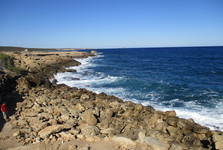 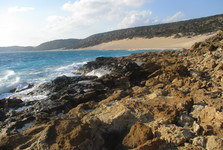 On our way we see the Troodos volcanic mountain range. Its highest mountain is Olympos (1957 m). They mined copper in the mountains, and also cut cedar trees to build ships.

Then I travel by Lefkara village known for their production of embroidery. Also, they produced marble slabs for tables. Believe it or not Leonardo da Vinci visited the place. Allegedly, he bought one slab. Jesus and the Apostles sit at this slab on his Last Supper.

Now I pass by two places known for excavations which brought evidence of settlements in the Prehistoric era. People lived here in circular stone houses, the dead were burried into the ground in the middle of their dwellings. They put a large stone on their chest so they would stay underground at night and didn't haunt around.

Now I see the large city of Limassol. It name means "between two". It was situated between two kingdoms - Kurion, and Amasos. There is a large port, and a salt lake just behind the city. A wine festival takes place around here in fall. 14 villages in the area produce famous Cyperian wine, there is a carneval in February, and flower festival in May.

Next Saturday we will reach our destination – the town of Pafos.