When I enter the modern districtof Famagusta I pass by a roundabout with a mosque on it. They built quite high minarets to it. Architect M Sinan wouldn't like it at all. According to him, minarets should be as high as only the third of the cosntruction. Howeover, I like this sight. Now I see huge walls of the old town surrounded by water moat. Thanks to this moat the Ottomans were held outside the city for over 10 months. However, they fired over 100 thousand cannon balls onto the city during this period. There used to be 360 churches. These were left without roofs and damaged. Still, the city is amazing. 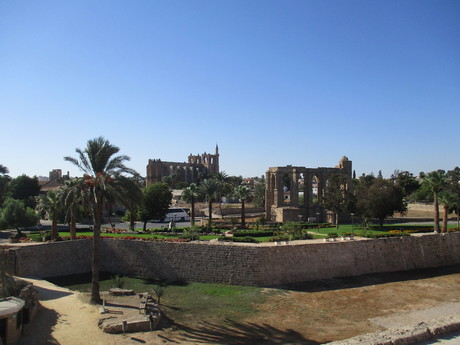 In the Middle-Ages, it was in its peak and much more picteresque than many European cities. There were more diamands and gold than in European royal courts. The city was rich thanks for its port and its free trade zone. All important and prestigious European companies had their offices there. They say that also there were the most beautiful courtesans. During the reign of the Lusignan kings many Venetians and Genovans settled here. Once they found themselves in bloody struggle who would pull the King's horse by the right side. It was of high symbolical values for it revealed status in this opulent city. Many people died as a result of this conflict. 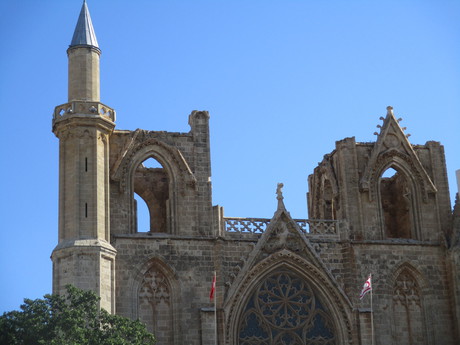 St Nicholas church is situated in the center of the city. It is beautiful and later was renamed to Lala Mustafa Pasha mosque after the conqueror of the city. The front facade looks like the cathedral in Rreims, France. Also, there is the crown of the kings of Jerusalem like in Selimiye mosque in Nikosia. The minaret adjacent to it doesn't look bad at all. It even reminds me of architectonic combinations such as in Andalusia. There it was the other way round - they made churches and Christian palaces out of mosques and Arabic palaces. Upon entering it I love simple interior. The Ottomans didn't leave there any statues or decoration. Thus one can truly humbly contemplate. 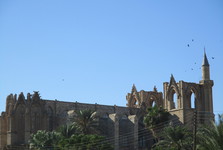 While walking around the city, I see many damaged churches, the prison of poet Kemal punished by the Sultan for writing verses against him. I walk around Venetian Palace and its three arches with columns from Salamina in between them. Then there is a church of the Knights Templar. Richard Lionheart gifted them the island. However, the templars were harsh on local inhabitants and later were expelled from the island. Then Richard gifted the island to the Lusigans who were forced to leave Jerusalem. 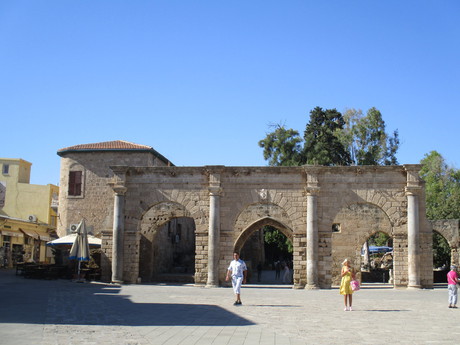 One bastion along the wall is called the Sea Gate because everybody who arrived at the city by boat would enter through the gate. There is a monumental St Mark's lion 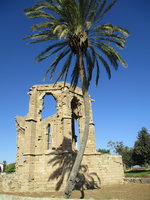 at the gate. The legend has it that he comes to live once in a while and opens his mouth. Those who bravely without any hesitation put a hand into his mouth would get out huge treasure. You "simply" need to be on the right place in the right time...

Lastly, I am about to visi the Othello Tower which inspired Shakespeare to write his Othello. It was here where the Venetian black fell in love with beautiful Desdemona. Her family condemned her. They both lived here togetehr. However, he was very jealous and one day he killed her. There is a small yard and I can see how thick the wall was. They say that even the famous Leonardo da Vinci helped to build them. There used to be a theater on the courtyard. A cannon with a cannon ball are on display in stables. I try to pick the ball but it is really heavy, 30 kilograms at least. I try to imagine 100 thousand of such cannon balls fired on the city.

Next Saturday we visit Salamina.