Bohemian Paradise and vicinity of Hrubá Skála is also one of the most important places four mountaineering. Dozens, maybe hundreds mountaineers cover local sandstones during the summer months, they are nimbly conquering white rocks surrounded by an impressive scenery of forests, castles or Trosky Castle.

In the last part, we talked mostly about works of men today we will speak about wonders of nature. The most important natural sight is the Hruboskalské Rock Town . The name marks a region between Valdštejn and Hrubá skála, a content of the first article. More than 400 sandstone towers offer unprecedented experiences and outlooks from where you can see the CHKO Bohemian Paradise. Height of individual rocks is around 120 to 380 meters. Narrow valleys beneath are crossed by many tourist path dominated by theBohemian Paradise Golden Route that connects 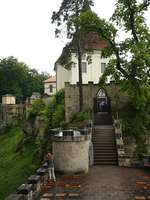 the most beautiful and most important places of the region. This “path” has 103 kilometers and it leads from Mladá Boleslav to Jičín throu many outlooks, deep valleys and in northeast it runs into rocky “towns” hidden in shadows of medieval castles such as Valečov, Kost, Trosky, Hrubá Skála, Valdštejn or Frýdštejn. No wonder, that Bohemian Paradise was one of the first areas where signs of the Czechoslovak Tourist Club were placed . The first propaganda movie about this region was made during the pre-war years, in the year 1937. Since then much has changed there, mostly due to a land redistribution and construction of modern infrastructure. Current red marked path crosses following towns and cities: Mladá Boleslav - Bakov nad Jizerou - Mnichovo Hradiště - Valečov - Drábské světničky - Příhrazy - Kost - Nebákov - Dolní Mlýn - Trosky - Hrubá Skála - Valdštejn - Turnov - Frýdštejn - Malá Skála - Besedice - Kozákov - Tábor - Železnice a Jičín. 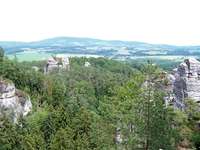 At least few sentences should be devoted to all these localities, towns and sights but we have no space for this however, I hope you will learn about many of the in other articles on our website on travel.

Well, lest get to place I promise you to tell you, Valdštejn Castle.

Original castle located on a steep, 380 meters high cliff was built during the years 1260-1280 probably by Jaroslav z Hruštice or his son Zdeněk. He was a descendant of the Markvartic dynasty, an influential north-Bohemian dynasty, which was related to the Valdštejn dynasty that ruled in Pojizeří, for example. The castle became a property and residence of the Valdštejns who ruled there over a century. In the end of the 14th century, the Vartenberks (related to the Markvartics) replaced them there. A difficult period of the Hussite wars

stroke also in this land and after Turnov was plundered the dominions of the Valdštejns were plundered as well. Since then the dominion was in decay. Bandits for some time who were replaced by more or less important lord replaced pro-Hussite lords. Around the year 1550 the historic period of the castle ended since a large fire plundered the rest of the castle. This fate that hit many historic landmarks also hit Valdštejn. Lost ruins of once great residence were alone for almost 200 years. Towards the end of the 17th century the place became more alive since pilgrims and hermits met there. The ruins of the castle remained in the Valdštejns property until the year 1821, in that time they allowed a construction of a romantic pilgrim site. The place flourished and its owners were the Aehrentals until the year 1945. Since the beginning of the 1950s there was created a center of mountaineering. Today, Valštejn is one of the most sought wedding places in the region. No wonder, picturesque views and unprecedented romantic atmosphere of the ruins makes this place truly wonderful…

There is a parking lot about 1 kilometer below the ruins (90 meters of elevation). You can get from there to the castle along a red tourist path. During the summer months there are possible paid guided tours.