As many other streets, romantic arcades line the whole square. Except for this we can find there the museum of the first horsecar in Europe. It connected Budejovice with Linz, Austria, and a 13th-century Dominican monastery. 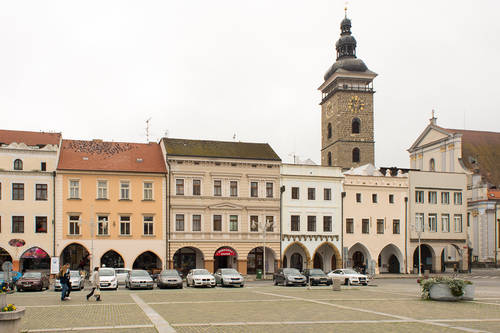 The forecast promised sun. I took off to Budejovice for an afternoon trip. It takes two hours by train to get there from Pilsen. Travelling from Prague is, unfortunately, still complicated due to a train corridor construction and the D3 construction. It takes you about 3 hours to get there by train. By car 2 hours, if traffic is good. I arrive at noon. The forecast didn’t do a good job. The sky is grey and I am thinking about taking my gloves. 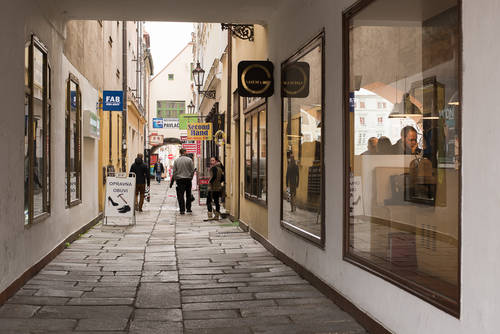 I start my trip in a new café near the square. I have to admit that I haven’t met so pleasant and natural service. Not even in famous cafés in Berlin. Refreshed by an excellent cappuccino I set off in the streets. I walk about in beautiful center. I am surprised that the streets are crowded with people. I am even not the only tourist here. 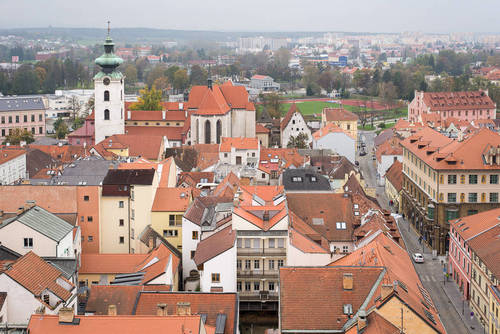 Ceske Budejovice was founded by King Premysl Otakar II in 1256. He wanted to reinforce royal power in this part of the country. Yet Budejovice long was less important city in this area. Only in the beginning of the 19th century, the importance of Budejovice raised. Then the regional administration moved there from Pisek and Tabor. Moreover, the first horsecar to Linz was opened in 1825. 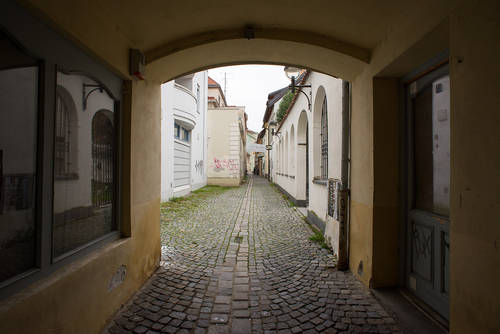 I climb pretty dangerous stairs up to Cerna Tower, a 16th-century building next to the cathedral of St Nicolas, just a few steps from the square. There are 7 bells to be see on individual floors. None of the, fortunately, rang. Still, one can hear south Bohemian melodies by a carillon. It is a beautiful view on the top. It is worth paying 30 crowns and the effort. Visibility is not the best yet still I can see Hluboka chateau and a couple of moutains in Sumava. 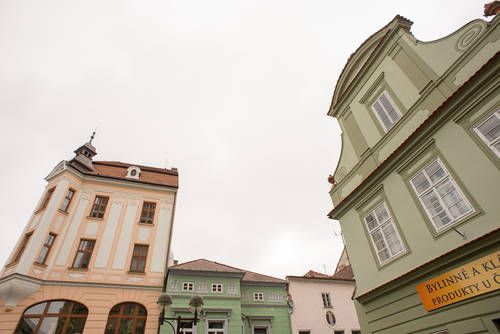 I slowly go back down (I didn’t hit my head at all but got stuck with my large bagpack a few times) and I go to Solnice, a Renaissance building with a museum displaying motorcycle. I head back to a former Dominican monastery. Piaristicke square is the place where you can find both places and also is a place among the most popular in the city. I cannot write why but I can feel there the hundreds upon hunders years old history the most. It seems as the time stopped there. By the way, the monastery and church of the Virgin Mary Sacrifice , který k němu patří, byly založeny ve stejném roce jako samotné město. 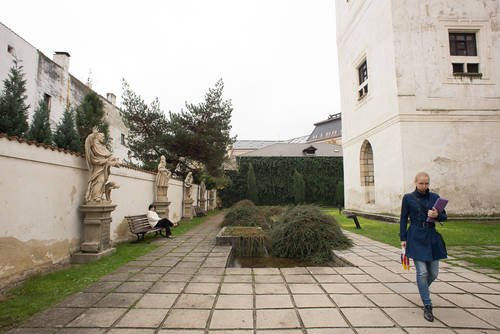 The sun, as promised, shows itself for a couple of seconds yet the autumn greyness returns instantly. Large flocks of pigeons and ravens are flying above the square (they have a large nest in one of the parks in Budejovice). It is getting colder and colder. After a small (very late) lunch, I return along Lannova Avenue back at the train station, board my train, and absolutely on time, surprisingly, arrives in Brno.

In my opinion, Ceske Budejovice has a huge potential in developing tourism. Except historic sights there is a number of events, exhibitions, interesting museums (the afore-mentioned Museum of Horsecar and South-Bohemian Motorbike Museum are among them) you can enjoy the atmosphere in the city. I think that Ceske Budejovice doesn’t suffer from what other smaller cities in our country suffer - you can have a meal for a very affordable price and of a good quality. You can sit in a couple of nice cafés that serve great coffee, or have an accommodation in a quality hotel, or a cozy family pension.

Published: 14.12.2015
We set off early in the morning with a long way ahead of us. We are looking forward to a lake cruise. In 1873 the first steam boat Emperor Franz Joseph I had set sails on the lake and cruises have been made there ever since. The steam boat was a technical marvel the then. It is 33 meters long and also was used as a propriety in couple of movies because it allegedly looks romantic. You can also take a ride by this boat as it is still part of the fleet.