Published: 16.6.2013
Today we visit one of the largest castles in Moravia. Its glorious history begins at the beginning of the 13th century. How the life at the castle which successfully defended against Swedish siege in the Thirty Years’ war? 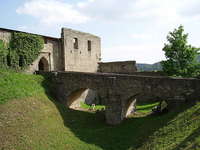 Within a triangle between Frydek-Mistek, Fernstat p. Radhostem and Pribor there is ruins of a castle which is still impressive despite its uneasy fate. We don’t know exact date the castle was founded but it is assumed it was built around the year 1250. First owners were earls of Hückeswagenu, Arnold and Frank. Their clan used to live in Pribor, a birthplace of Sigmund Freud, however, it is a different kind of story.

Since the castle had different owners, for a long time also bishops of Olomouc. Since the end of the 15th century till the half of the 16th century the castle expanded. This continued until 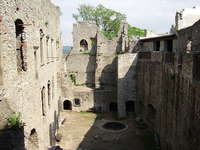 the first half of the 18th century, to the year 1762 when the unpopular and uncomfortable castle was definitely abandoned. Ruins of one important stronghold which had to defend local trade route from Morava to Krakow in Poland. But the place was soon forgotten for next several centuries. Maybe young Leos Janacek , perhaps the most famous native born in Hukvaldy, used to play here. An international music festival takes place regularly within the castle’s walls. The name of the festival is Janackovy Hukvaldy. The XX annual festival in honor to famous native is going to happen this June (more information is available here:: http://www.janackovyhukvaldy.cz/cz/festival/ )

The history of the castle, its owners, its purpose and how it was used is long. So many names have only few buildings. We can name few of famous figures related to the castle such as Sigismund of Luxemburg, Jan Capek of Sany (chief commander of the Hussite army), lords of Boskovice, Jiri of Podebrady and many others who had Hukvaldy in their possession. Some of the famous figures also used to hide there from a plague, Tatar or Turkish raiders or were there just imprisoned there.

In the present the most well-preserved part of the castle is its St Andrew chapel built toward the end of the 17th century. The chapel was the only building maintained even in times when the castle itself was abandoned. Thanks to its great acoustics it is a place where many cultural and musical events are being held. Adjacent preserve gives you an insight into life of forest animals, fallow deer, mouflons etc. 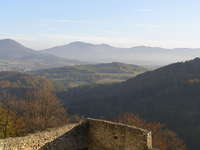 We may assume such a busy life at the castle wasn’t for at least last 7 centuries. Even in the lower castle we won’t get bored. There is a local minibrewery, golf course, or a unique greenhouse where many exotic carnivorous plants, insects, crabs, speaking parrots and toucan. The former being the mascot of local ZOO.

The land of Leos Janacek he used to call “Moje Lassko” in foothills of the Beskydy is worth visiting. Definitely.