If we continue to the town center from the train station, after about ten minutes of walk you will pass the church belonging to the Baroque modified Romanesque-Gothic church. Bartholomew. Although the Baroque modifications obscured many original architectural features, today we can see the Romanesque and Gothic portals window. From the church we may already see the square, dominated by landscaped areas with a historic fountain and statue of St John of Nepomuk. On the eastern side of the square literally glow sgraffito facade on the Renaissance chateau from the second half of the 16th century. The castle, which used to be one of the largest of houses in  Bohemia was built there in the years 1570 - 1577 instead of former medieval stronghold by Jan of Ricany. As it is usual in Bohemia, today the castle is unkempt and inaccessible.

When we turn on the square to Sedlcany after 100 meters we can see a Jewish synagogue built in 1741. It was built on a place of a former synagogue from the 17th century. In addition to the exhibition of the local Jewish community in the synagogue can also visit many a cultural event. In the vicinity is the Jewish house No. 127, that also refers to the former glory of the local ghetto. Last but no less important reminder of the Jewish settlement in Kosova Hora is a Jewish cemetery from the late 16th century, situated approximately 300 meters south of the square, behind the road I/18. 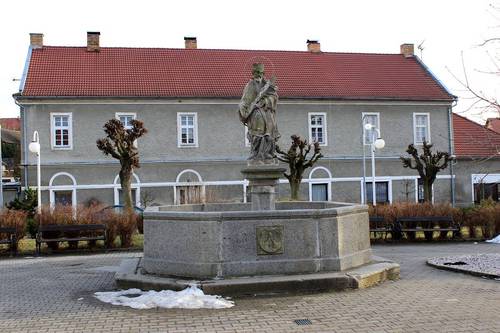 If we go to a Jewish cemetery, we come out from the square to the southeast. After we walk the underpass of the road I/18 we can see on the left over the broken asphalt a road leading to the benches we see yet another tourist attraction - a long wooded knoll, which is already half a century protected as the NL of Kosova Hora . The object of protection is genista sagittalis. Also, talus slopes covered with pine trees deserve protection. Across the forest leads only an unmarked trail. 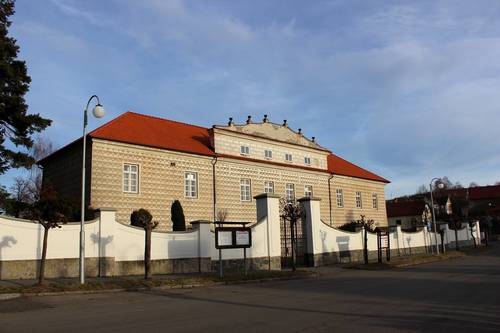 When we return to the square (in the meantime we could have a lunch in a restaurant there), we will go north, straight down the aisle to Dolejsi pond. On the opposite side of the pond there is another monument, a Baroque cemetery chapel of Archangel Michael with the adjacent cemetery from 1731. From there, we go out of the village along the blue trail to the starting point of the local yellow markings under Koliha’s forest. 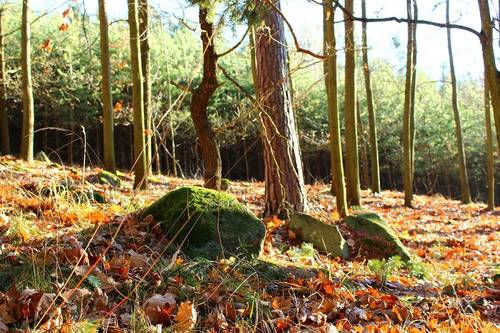 From the crossroads we follow the local trail up around the legendary Snake well until you reach the turnoff to the discerning rock. This site strewn with granite boulders got its name thanks to the folk tale of fortune-telling and holding court. Right in the rock called the Judgment stone are even seeing the devil's fingerprints body! Who knows what happened in the Koliha’s woods?! Spirit of a romantic person, however, probably would not be satisfied by an expert commentary on the origin of quaint shapes 'embossed' in stone. To be honest, it is the erosion bowls and troughs caused by wind and water activities. The nearby elevation of 519 m above sea level we find remarkably grouped stones are remains of the German military vantage point from the Second World War. Another memory of this bleak period is also nearby monument to the collapse of the U.S. aircraft. To it , there is a marked trail from the intersection of routes over the Snake well. Wherever we go from the Koliha’s woods, we always should have eyes open! Otherwise, we could also exceed the "vicious root", as the legend tells, and get lost in the woods for good! 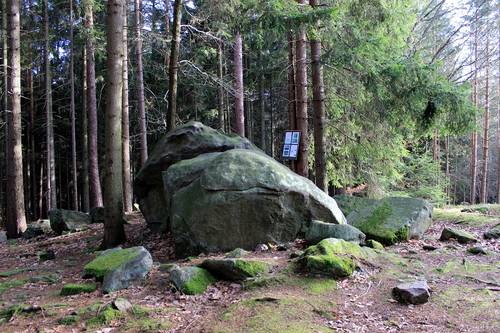 If we are lucky to not to go over a ”vicious root “ we may easily get to the aforementioned intersection located above the Snake well. We continue on paved road to the southeast to flooded quarry of Kosova Hora. Its murky waters tend to be widely used during swimmers and divers, so we have a chance to try a refreshing dip in the shadow of the granite walls. The quarry is only about one kilometer away from the railway station where ends our journey through the sights of Kosova Hora. 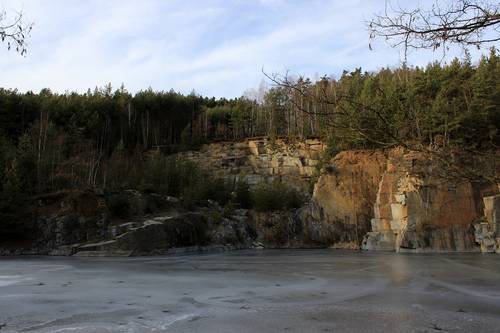